adjusting the tension in the bobbin thread

Middle bought himself an Indiana Jones shirt.
Now, make no mistake, I don't mean that Middle purchased a safari shirt, or a cargo shirt or a khaki shirt.
I mean that Middle, being Middle, researched for quite a while and bought the exact same shirt that Harrison Ford wore in, I think, the first Indiana Jones movie.
The problem is that Middle is very slight.
Slim.
Skin and bones.
He bought a "small" but it was still pretty big on him.
As it is 100% cotton and Middle aspires to the "worn" look, he immediately washed and dried it. I wasn't home for the process but it looks like it was somewhat effective.
It's still a bit large in the shoulders and a tailor told him there was nothing she could do.
But Middle and I had another thought.
We realized that it was really just too long. I mean, the body of the shirt is a little large for him but it's not an uncomplicated garment so there wasn't much I could do about that save for putting darts in the back and we agreed that that wouldn't work.
Minus a few inches, though, and it would be pretty damn good.
We laid it flat. We made a pattern of the bottom from newspaper and then I cut it up.
So far so good. Unfortunately, I don't have one of those feet for my sewing machine that folds fabric under when finishing a hem. (I know I'm not explaining that correctly, just go with it.)
I decided to do a test-run on the discarded shirt fabric as I haven't used my sewing machine in a long time and wasn't sure how it was running.
It wasn't running well.
As near as I could tell, the bobbin thread was very loose. If you've done any sewing you know what that looks like.
With a snip and a tug I was able to remove long lengths of sewing with little effort.
But how to tighten the tension in a bobbin?
Middle and I sat with YouTube and figured it out. It took a while but we were successful.
In the meantime, my bobbin thread had run out so I popped a bobbin with black thread into the machine - just for the tests. (So, if you're following along at home, beige thread in the needle and black thread in the bobbin.)
And THAT'S how we realized it wasn't the bobbin thread that was the problem.
Ten minutes later I discovered where I had mis-threaded the machine and three minutes after that the shirt was complete.
Thus ends my sewing adventures...probably for another year. 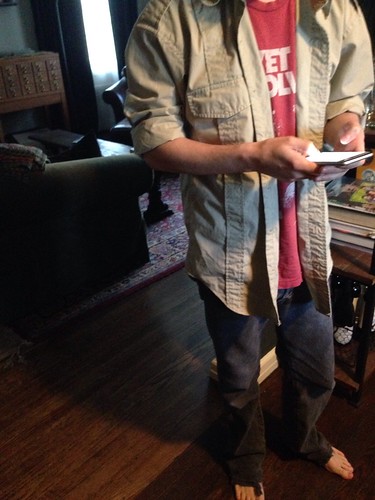 Now that that's accomplished I have to roast a chicken.

kmkat said…
As an experienced sewer -- sewist? -- I have to tell you: that is NOT an uncommon error. Also, I have always had one of those hemming feet, whatever they are called, and I have never ever used it. I prefer to fold the hem and press it, then sew it. Less chance for mechanical failure that way.

Now, if I had to roast a chicken, I would be all over YouTube and the innernets looking for instructions...
8:29 PM

Anonymous said…
Well done, you! I don't even own a sewing machine. We stitch by hand here, fearfully and with great trepidation. I'd never attempt that kind of alteration.
9:15 PM