I've promised myself that I'll walk to work again this winter and I've spent this week doing it.
I've never been in great shape but I've been lazy (for lots of reasons) and I need to get walking again.
It's about a mile to my office and I really love doing it. Going home in the evening is a different story.
Sometimes I catch Youngest and we go together but it's dark, cold and I'm tired so I'm on the subway to the train. He doesn't go back to school for a couple of weeks anyway.

(Middle, commuting)
Middle commutes with me two days a week. He has a steady gig with a long haul (he takes a ferry across the Hudson). He'll chat for a few minutes but he's a very serious sleeper - and can do so anywhere at any time. 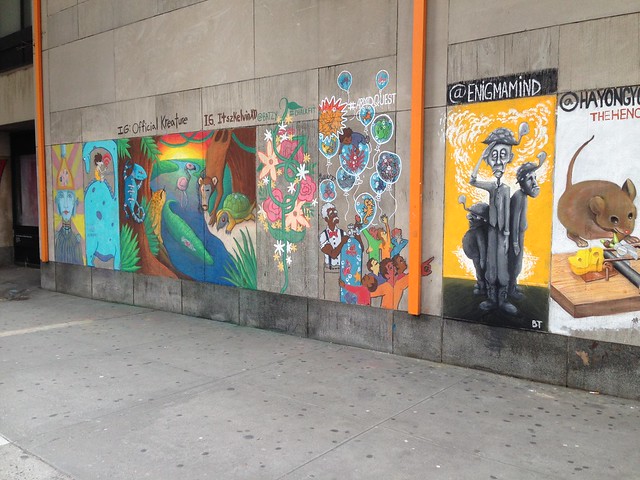 It's that time of year at Art School. The seniors do their chalk drawings on the outside of the building. (I should clarify that the Illustration School seniors do this. I don't know what Youngest's class does and suppose I will find out in a few months.)

It's all boots and parkas in the city, which is just the way I like it. We had a couple of days which were colder than 20f this week. I love this weather.

I'm not sure I like a fur hood - but both of these were great.

I missed snapping a picture of my favorite little commuter. He's three years old and rides the subway with his mom, usually in a stroller. But this week he insisted on standing and walking. He very much wanted to hold the pole where I was standing and she was worried he'd fall.
I not fall, mommy.
I hold a pole, mommy.
I stand here, mommy.
The train lurched and he kind of flew into me - a highlight of my day.

I don't have a commuting buddy for the ride home at night but was approached by a lady I've seen for a long time. She told me that she's seen me for years, riding in the third car. I sort of know that can't quite be true. She's seen me since PA (post accident) as we traced it back to after I wore a sling. She was telling me that she fell a couple of years ago and shattered her ankle. And who was her surgeon?
The guy who was, eventually, Bono's!
She knits and chats and works for a fabric company. She is, undoubtedly, connected to some of the quilters and knitters I know through the internet - though I haven't really explained that yet. She's working on a beautiful scarf. Last night I brought her a knitting book from my office - she was tickled. I am surprised at myself making a new friend.

It's going to be warm this weekend. (sad face)
I'm going to fetch Youngest, who has been away for a week. (happy)
Middle and his girl have decided to be serious about being sweethearts (happy)(just sweethearts, which is enough)
Oldest? Doing pretty well and soon to do his own housesitting gig. (happy)

I have a mountain of laundry waiting for me. You?

Anonymous said…
Oh, that new friendship sounds so wonderful! Isn't it fun to discover someone like that, in an unexpected way?
I'm dreaming of our tropical vacation, even though it hasn't been THAT cold yet. But tomorrow it will, so I must fill birdfeeders.
4:03 PM

Mary D. said…
!. No commute buddy. It's about a 20 minute drive to work and I do it in silence (no radio or iTunes) because sometimes it's nice to hear nothing. On the way home, I either listen to iTunes or go silent again. I break this rule for the latest episode of Serial.

3. I just undid all that great work this morning at the gym with pancakes and bacon. Late brunch early dinner? Not sure which. I will soon fall into a pancake coma.
6:01 PM

Poppy Buxom said…
My kids' doctor spends more time chatting with me than he does with them--at least it feels that way sometimes. Anyway, he said Weight Watchers and everyone else under the sun is so big on walking (other than it being cheap, no-fuss, and requiring no special equipment) because it's the only aerobic exercise that doesn't increase appetite. That may be true--I don't notice running or elliptical increasing my appetite, but I do notice that walking doesn't tire me the hell out, which is kind of the same thing.