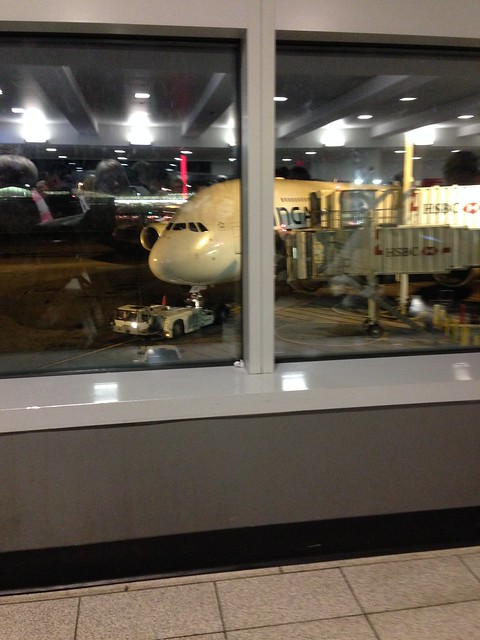 That's my huge plane. Do you know why I love the A300? I love the A300 (if I'm right about the numbers) because it is so gigantic that it feels like you are sitting in a room and simply transported to another place. You don't really feel take-off or landing - you just find yourself, seven somewhat uncomfortable hours later, in a different place. You never see more than the 50 or so people you are seated with - it's all curtained off. The food is interesting too. I had General Tso's Chicken. I think. 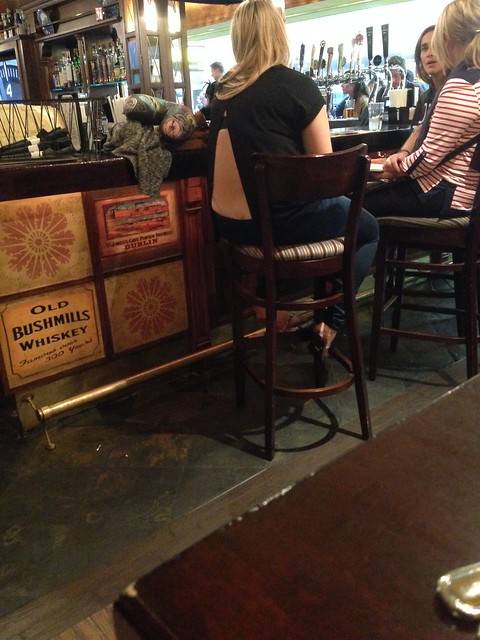 In the airport bar it is acceptable to show your bra as well as your butt crack.
But that is in New York and I am in GERMANY where we are all wearing our down coats and woolly scarves. It's 39 degrees here. 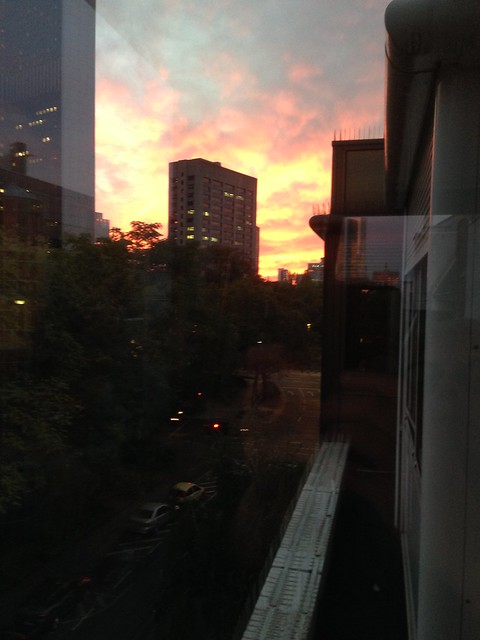 My view last night.
I took myself to a favorite restaurant and had some lovely pasta with chicken last night.
It was early and I had the place to myself. 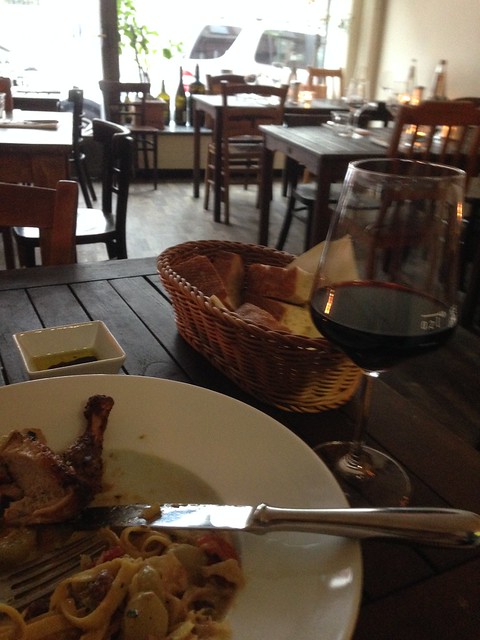 Tonight, I put together a dinner from the supermarket. 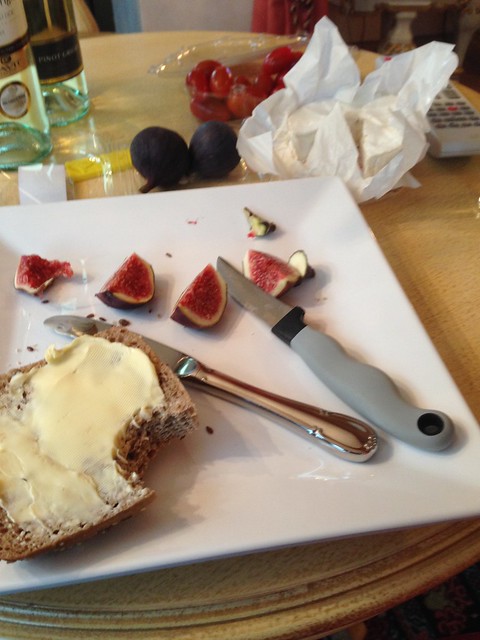 Bread and cheese and figs and tomatoes. I've been to the supermarket three times - for various reasons. Strangely, I love going to the supermarket in foreign countries (not so much at home). And, as instructed, I have purchased mayonnaise in a tube. 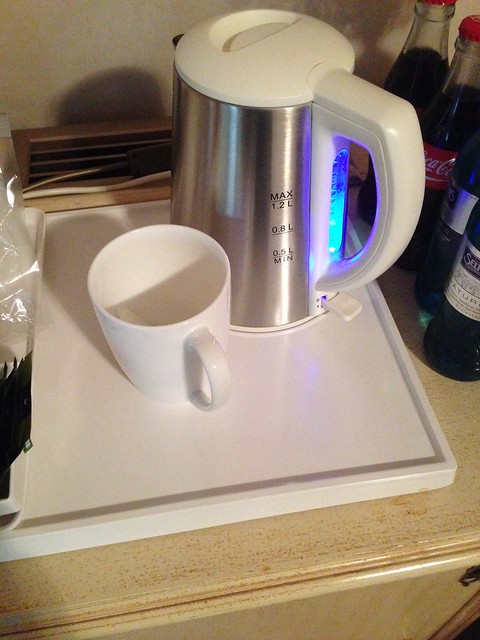 This year, my room has a kettle. Usually I scoff at that kind of thing but I'm working on avoiding a cold, which keeps creeping up on me, and I've made a lot of tea.  I also bought some purple throat drops, thinking purple must be a good flavor... and being wrong.

I've been riveted, this evening, by German television.
First: a medical drama in which, I think, the woman hit by the truck whilst riding her bicycle, had just confessed to being the doctor's mistress, to his wife. She needed two surgeries, during which time the wife sort of fell in love with her too. I THINK.

Then there was the German nature show. Lots of fish seem to be dying in the far bottom right part of Germany where they let black stuff flow into the rivers. I THINK.

There is a wonderful show with ping pong and trampoline jumping but all this and more done to extremes and I'd love to watch it but it doesn't start until the 24th. A disappointment to be sure.

The King of Queens just isn't the same in German.

Filed under A Couple of Mishaps Here and There:

I was reaching for something on the shelf over the toilet and accidentally knocked a hotel-sized shampoo bottle into the toilet (I've had mishaps in this hotel in the past. I blew out the electricity once.) Figuring it was as clean as possible as I had just arrived, I reached in for it. But it was GONE. So, of course, I did what one does. I flushed. I never saw it again and the toilet seems fine. And, so, that tiny bottle is probably killing fish now in the bottom right part of Germany.

Earlier today I was bringing two boxes, with my little folding hand cart, to a meeting. I know I should have taken the elevator, but I didn't. I took the moving stairs as I heard someone call them yesterday. Of course the boxes fell off the hand cart and I had to run ahead on the escalator and wait for them to be pushed off and then reposition them on the cart and quickly act like nothing happened.

I have an opportunity to do it correctly tomorrow.

The Mindy Kaling show, which I have never seen at home, isn't really very funny in German.
Just saying.

Strictly Jen said…
I went to church in Germany while staying with German friends because their kids were in the choir at Easter. At one point, they appeared to chloroform Jesus. Very confusing.
4:53 PM

NorahS said…
Love the update! It all sounds wonderful.
10:11 PM

kmkat said…
I adore going to supermarkets -- and corner markets -- in other countries -- England, Scotland, Japan, Spain, South Africa. We passed this tradition on to Younger Son, who did it in Zurich and Amsterdam last month while on a business trip. He sent us a lovely series of photos from which I concocted two blog posts.
4:26 PM

KPB said…
That woman's top is a totally unacceptable situation.

Is that butter on your bread? Because if so I just want to hug you even harder. Butter spread so thick you leave teeth marks is a joy in life.

I have a recalcitrant teen on my hands and I keep thinking "what would Blackbird do". I'm fretting but trying not to lose my shit too much.

Anonymous said…
You're having such a great adventure!
Listening to German being spoken always terrifies me a little. I think I'd hate to watch TV there.
Such a meal.
Such a plane.
8:46 PM

Judith said…
I'm glad you're having a good time so far, and I'm glad you like our current weather. Me, not so much, though I hate the constant drizzle more than I do the colder temperature. It was summer just three weeks or so ago, waah!

It's funny that you like Seinfeld in German (but then, I don't like it even in English). Though I read an article once about the person who did the translations to German, and apparently she (I think it was a she) put an immense effort in doing so in a way that would preserve the jokes, if at all possible, or put them in a way that kept it being funny even without the proper cultural context present. That's quite an achievement considering that you also need about 1/3 more text to say the same thing in German that you do in English. So she had to shorten it all while also matching the movements of the actors' mouths. I came a way from that article with a lot of respect for her achievement, even if it didn't make me like the show any more than before.

The term moving stairs is charming. In German we call it „Rolltreppe“, translates to rolling stairs.

I don't live far from Frankfurt and I'll actually be at the bookfair tomorrow, so it's probably lucky you never shared the name of your firm. Otherwise you might've had a surprise meeting of a reader in the wild, and in another country even :) But don't worry, I wouldn't have sprung that on you without warning. I know it's weird to meet internet people, especially if they don't comment much like me. I've been reading you for a few years now, while you wouldn't know me from Adam (or Eve). Maybe I'll talk a bit more and then not be as much of a stranger come next year's fair ;)

@Green girl, I've heard that sentiment so often, but it usually seems to come when people only heard the internet version of German that's intentionally made aggravating and harsh. While I'll never be able to just hear my own language without also understanding (so, won't be taking in just the sound), I can assure you it sounds a lot softer if simply spoken for use and not comedic effect. No need to be terrified :) And it's also interesting that in some ways, the English way of saying things can be harder. Just take my name for example: if you say Judith in English, it starts rough with a dsh-sound made between your teeth, and ends in an equally jarring th. But when we say it in German, it's spoken exactly like „You-did“. Quite a bit softer and nicer than in English I think, and also what I actually consider my name. I remember getting into an argument with my English teacher once when he insisted pronouncing all our names „in English“, while I told him that saying it like that is quite simply not my name and that my parents picked the right pronunciation when they originally named me.
9:43 AM

Dan Renzi said…
Whenever I go on cruises I try to stop by a supermarket in the port cities. They are more interesting than museums.
5:05 PM