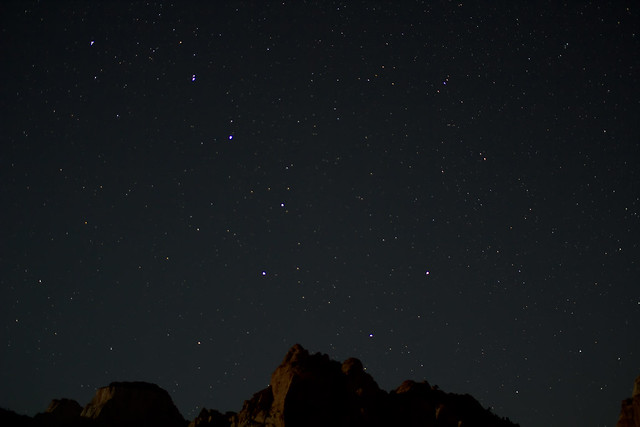 Click through to flickr to see this best, on black.
On his trip (you know, with the cars and guns and heat) Middle went to Zion National Park at midnight to shoot the stars.  I think it was pretty spectacular. I think much of the trip was spectacular but need to tease it out of him. He's not a talker. I just get little bits of things...205mph, they had a luggage truck and porter and his bag was in his room wherever he arrived, upon entering his room at the Mandarin in Vegas the curtains opened automatically when he came in the door.
That sort of thing.

Youngest and I bought this fish/bird picture at Ikea, for 80 cents.
We think it somehow looks like Middle.
Middle doesn't shave his legs.

I seem to have lost step with my favorite baby on the subway.
He was amazing with an iPad.
I did see this baby yesterday and she was nearly as adorable.

She refused to flirt with me.

It was hothothot last week. Probably near 100 degrees on the subway platforms.
I can't say anything after Middle's Death Valley adventure (120) but still.

I find The Daily Overview quite calming.

I knew the system was old, I was surprised it's so, uh, manual.

My office friend P and I went to a party at Food52 - it was lovely, but we actually went to see their office space as we are meeting with the designer. Really lovely.
They served amazing cocktails. Note to me.

I needed to check in with Bill Cunningham!

K is off to archery, Youngest and I are going to the beach, we've got friends coming to dinner, K is making this -

I think the balance situation is fairly good.