Middle woke us at about 1:00 this morning. He was in a lot of pain -- and this is Middle we're talking about. Middle never feels pain.
Anyway, he'd been away for the weekend but said that he was unwell the whole time and had been pretty sick. I thought maybe he'd been drinking but he explained that he wasn't able to - that he'd been too sick. He asked if I'd take him to the hospital.
So here we are.
Lots of tests, a CT scan and he's been admitted. 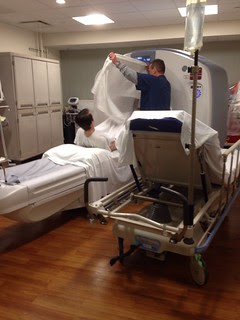 Everyone has been very nice. 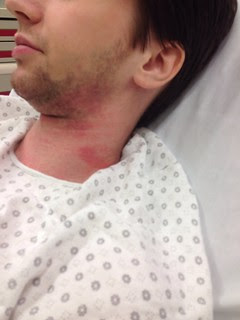 Morphine can make a person rash-y, but it works and he's sleeping for the first time in days. 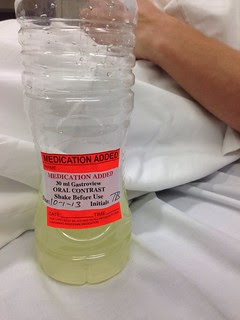 He was so good about drinking a big bottle of "Oral Contrast." 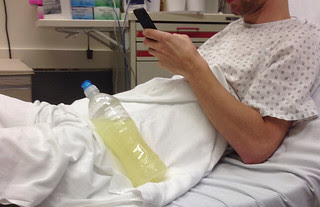 Before the Morphine and the Oral Contrast, he was still able to text friends.
After? Not so much. 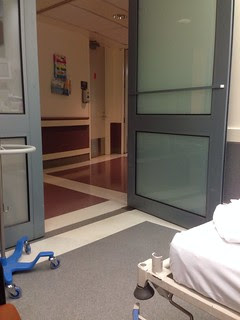 We're in ER room CO2 if you want to stop by.
And, if you can't stop by, send good thoughts please.

Anonymous said…
Sending good thoughts. Please take care of yourself, too. Worry is exhausting. Carol
8:42 AM

NorahS said…
Sending good thoughts! Hope all will be well soon.
9:09 AM

Paola said…
Again.
I hate this.
Thinking of you and sending every good vibe I can.

alice c said…
Goodness. I feel as though I stopped breathing for a moment when I read that.

Holding thumbs for Middle and a ((hug)) for you - even though you don't approve of such things.
9:15 AM

Little Miss Sunshine State said…
Sending healing thoughts to Middle. I'll keep you all in my thoughts.
10:01 AM

Jen on the Edge said…
Sending healing thoughts, hugs, and love.
10:45 AM

And those wonderful ER gurneys are most uncomfortable. The Stooges and I have spent our share of time on them.

Jan said…
This brings back memories of a similar experience with my son a few years ago, while his wife was away on a trip with her parents. I hope Middle's feeling better this afternoon and that the hospital visit doesn't spiral into what we went through that fall.
Hang in there, BB. All those parents who think the worry subsides once they grow up?...ha. Sending good thoughts your way.
12:01 PM

Anonymous said…
Sending healing thoughts and hugs. Be well, all.

Poppy Buxom said…
Oh no! And he's the stoic one.

Mary said…
Have just come out the other side of peritonitis and post op complications with my son (he was discharged home this evening after 10 days in hospital). Sending you many, many good thoughts.
6:33 PM

Anonymous said…
What the heck could be happening?? Hanging my prayer flag for everyone.

Loretta said…
Healing thoughts a plenty winging your way. I hope it is resolved by now and he is stable and recuperating. Sigh. Those middle of the night events take a wallop out of you for weeks. Kisses and hugs.
8:35 PM

zephyr said…
oh my goodness.
Sending you and MIddle many good thoughts and wishes for good news very very soon.
in fact, i hope the worst is already over and you all are breathing easier again.
xo
9:38 PM

kim at allconsuming said…
Hospital is no good at all. I was back there on Sunday night with a busted (again) back. I'm on all the good drugs. They gave me 2 (TWO!) shots of morphine - it really does make everything better. I do hope Middle is OK. Is it bad that I find the flooring pleasing.
2:41 AM

kim at allconsuming said…
And "oral contrast"? That sounds ghastly.

Unknown said…
eeek, hope he is feeling better! Thinking about you guys.
10:16 AM