the suit and more

So, to recap, K bought a suit a couple of weeks ago but they were unable to fit Middle, who wanted to buy a suit as well.
I'd love to fit you, said the salesman at Nordstrom, but I am not able to. I'd suggest something European, he added, they'll be able to fit your build. (Read: very narrow.)
Middle and I met uptown a few days later and he bought a suit.
It required a great deal of tailoring (his waist measures 22") and parts of it had to be completely re-cut, but it was finished today. 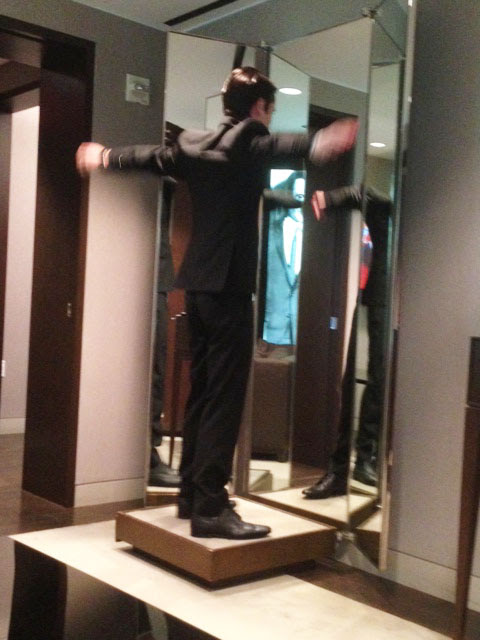 I don't know why they ask him to strike this pose, but they do.
And he does. 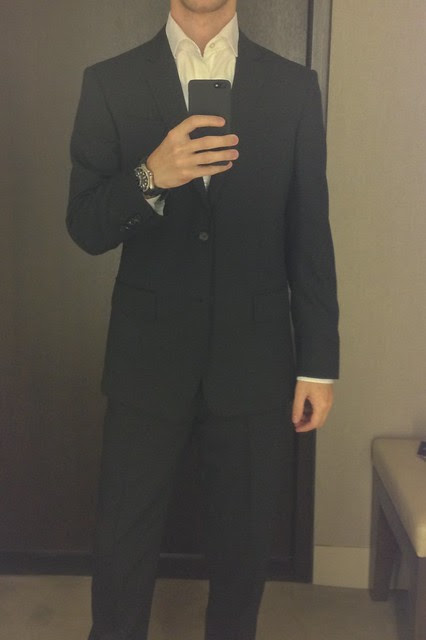 They did remarkable work fitting him. It is impeccable. It is beautifully made.
He's ordered dress shoes, they are trapped in customs.
He has no shirt or tie...but the suit is breathtaking.

I had been browsing coats on the internet for about a week.
I am traveling to Germany and London in the next nine months and don't have a coat that will carry me through. I have an anorak and a puffy coat - nothing formal that isn't thread-bare.
I've searched for hours. Wool? Cashmere? Something traditional? Edgy?

After we had a look at Middle's newly tailored suit we went downstairs and looked at coats. 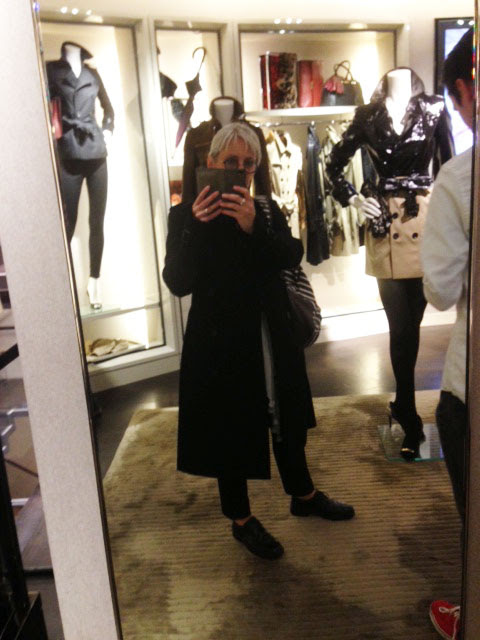 Of course it is the most impressive garment I have ever worn (save for my wedding dress).
It is traditional and edgy at the same time.
It was horrendously expensive and, while I had a list of items I felt I needed in my new job (a tote for my laptop, a new suitcase, boots) I'm not buying any of those things as I've bought this coat.

We called for the tailor. 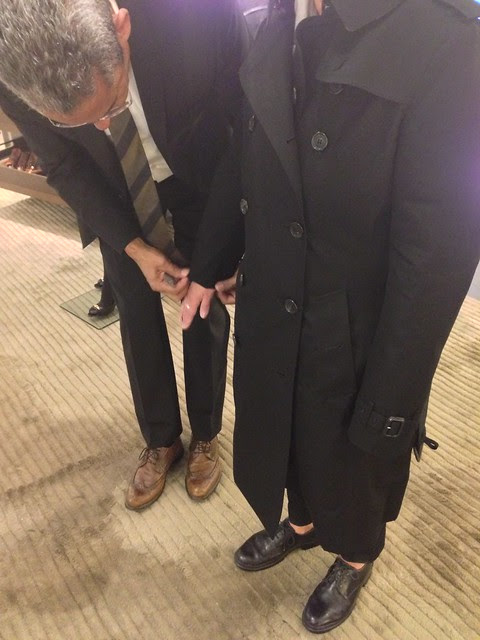 He measured and pinned.
He lifted the shoulders and checked the drape. 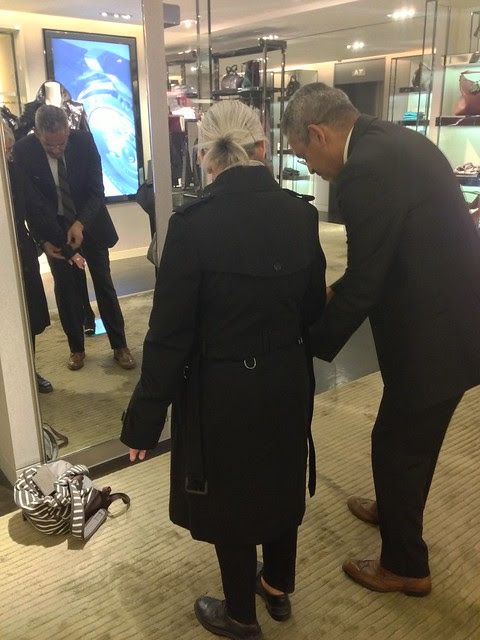 He worked quickly and precisely. 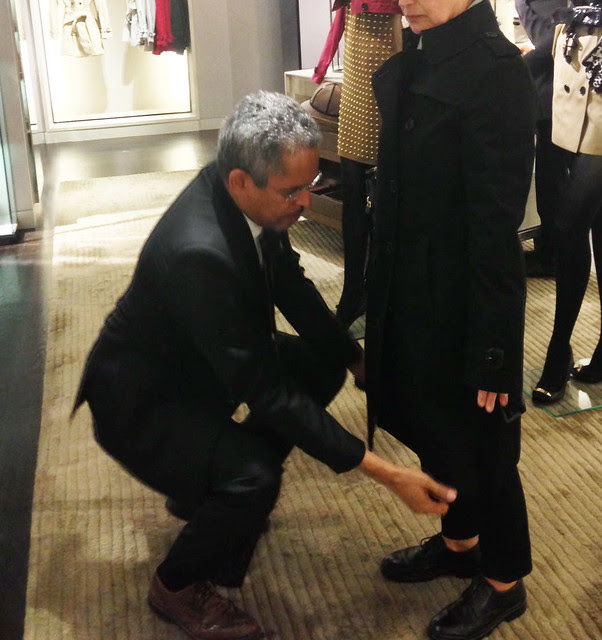 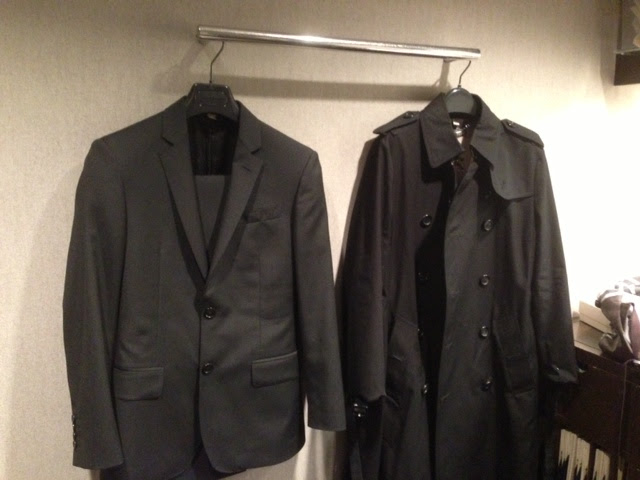 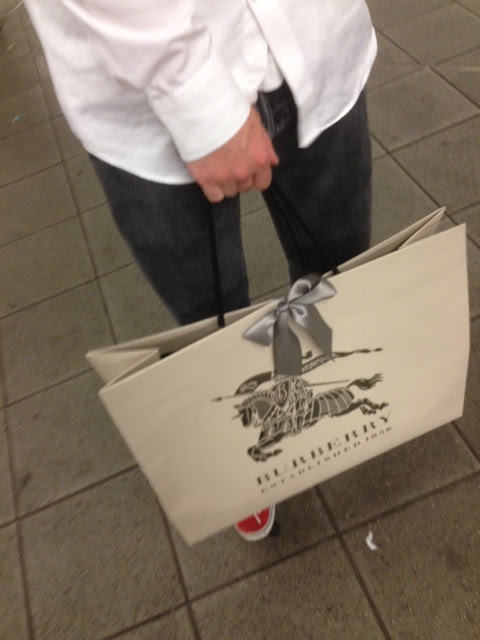 My coat will be ready in two weeks.

Jen on the Edge said…
Middle looks stunning in his suit. I got a lump in my throat, as if he were my own son.

Sometimes I forget that I don't know your boys (young men) in real life, as I feel like I've known your family forever.

Your new coat is amazing. And proper tailoring will make all the difference.
12:04 AM

L.P. said…
The suit is STUNNING.

And your coat will please you for years; it's a classic, and money wisely spent.
12:38 AM

Paola said…
Just so you know I own a coat like that (which I bought in Tuvalu EONS ago) in strawberry RED.
Yes, I do.
For a split second I thought you cut your hair ...
Middle looks very sharp and chic.

kkc135 said…
Okay here's an off the wall question, are you wearing any type of "sock" with your oxfords?

You can never go wrong spending good money on the classics! Love the suit and really love the coat.
7:52 AM

alice c said…
So much to love.

Middle in a suit - I know that moment.

Hair! Brogues! And The Coat. So very covetable. You do know that you will have to put it in the overhead locker when you fly - right? Also London coats are surprisingly disappointing so you will be surrounded by gasps of admiration when you arrive.
8:51 AM

I love your look. Middle's too. And your new things. Thanks for taking us along.

Lucille said…
I knew it was a Burberry from the first sight of the little black leather buckle. We have one from circa 1980. Everyone has had a turn with it. It's a miracle no one left it anywhere.
4:43 PM

Scot said…
That's a very nice looking suit. The picture of him in it is backwards, right?
Also, great looking coat. Will it keep you warm?
I have Burberry that I bought years ago and I still get compliments when I wear it.
Money well spent!
8:44 PM