iChat has to be the single best invention in the last ten years.
Perhaps I over-state.
We've chatted with Youngest a few times and greeted his hostess (it was wonderful to see her) in a video chat.
It's pretty terrific to have him chat us when he wants to give us an update and it works as beautifully as if he was across the hall. (You do know that my family chats to each other on their laptops when we are all home, right?)
Yesterday we were a little concerned as his pal A was very shy and quiet. Youngest assured us that he'd get her to warm to him as soon as they had some time with a computer or video game.
Here's the report:

i slept a little today!
Then i went for a walk to learn about the neighborhood, theres this one old man who sells you your large LED lights, AC's and central air units in a store no bigger than Middle's room.

we had pancakes for breakfast, the maple syrup went over VERY well it's really good stuff, japanese pancakes aren't as good as dad's but they're better than IHOP's.

then me A and C went to Tokyo's new york city, the famous part that every one knows, we went to the official PokeCenter and it was amazing! Than we went to a bunch of anime stores, LOTS OF ANIME STORES! Got drinks at a cafe and went home

A has warmed up to me alot, we spent 3 hours watching lolcats. japanese and american ones. We played video games together and talked for a while.

Unfortunately i feel sick, been dizzy and pukey all day :( but i think i'll be fine!*

Yes i think you did find A's house because there is a 7/11 near it, though her house is red, not sure about the motorcycles on the roof, haven't been up there.

I was in tokyo watching a giant screen when america beat japan in swimming it was hilarious me being the only american there cheering.

the things they sell in tokyo are amazing, this place truly is the best place in the world, besides new york of course.

it's really hot here, like barbados was bearable, here its really really bad! But i'm drinking lots of water and stuff.

love you so much! Day one=success! 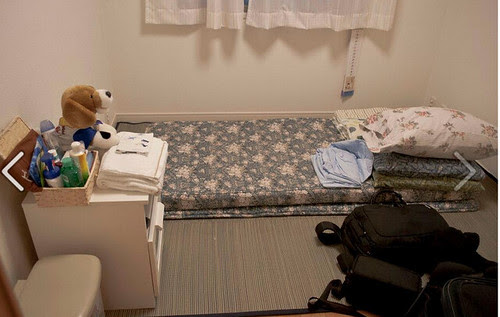 This is my room! It's small but a really good size. I like it alot. It's 98 degrees and almost 70% humidity here so it's very very hot and sticky. My host family made my requested dinner of cold udon noodles, which was freakin delicious!


*We're working on this.

kim at allconsuming said…
This makes me teary and exhilarated all at the same time.
7:50 AM

Paola said…
I'll admit Japan is one place I've always wanted to visit.
THanks for the lovely recap.
Cute room!
Ciao Youngest.
10:03 AM

Poppy Buxom said…
So glad that Youngest is having a great time! And I'm taking notes, because now Miss Buxom wants to go to Japan for her graduation present.
12:11 PM

Anonymous said…
Fascinating! And it makes me wonder if the guys call each other Youngest, Middle, Oldest, or if that was your editing.

alice c said…
Have you made Youngest promise to send photos of Javanese street style? No! Why not?
5:59 PM

Anonymous said…
Hi BB, first time commenter here (I'm a first time commenter on any blog and hope I'm not violating any blog etiquette), although I've been a follower and fan since I linked from Jennsylvania's link a while ago. I know you want to protect your family's privacy, but I'm wondering if anyone else has made the connection that Tuvalu is represented at the Olympics, and those six or so athletes were on camera, at the same time Youngest is away? Coincidence? O.K, you don't know me, so you don't know that I'm completely kidding when I write that. Anyhoo, I appreciate your courage and tenacity, and thank you.
7:16 PM

blackbird said…
New commenter, Anonymous makes a good point.
We don't have actual PROOF that Youngest isn't in London do we???
9:47 PM

Anonymous said…
It would be so much easier to send a kid away with video chatting--let them see the world, but still check in for visual confirmation of health/well-being/etc. I do not think you over-state the importance of that development.

Your son has your same great powers of observation, thanks for sharing his view of this new neck of the woods with us!
8:47 AM