Sure enough.
Mother's intuition.
Six weeks in a cast. Occasional pain.
Not healed. 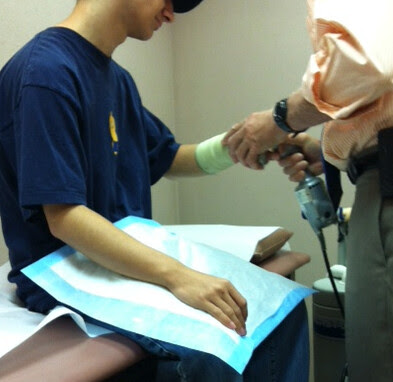 Youngest was very, very happy to have the filthy, smelly, cracked and disgusting cast cut off.
I love this doctor. Soft spoken and gentle with a quiet way about him. This is small potatoes. (Do you say that where you live? Small potatoes?)
So, the cast came off, we gave Youngest plenty of time to wash his wrist and exfoliate as much as he could and they took lots of x-rays. He had lost a lot of mobility, it looked pretty gruesome to me. We had a sit-down and a wait. The doctor consulted with his partner and they agreed.
Six more weeks in a cast.
I think if it doesn't look better in another six weeks, well, that'll be three months and we may have to do a little something, he said, making a screwing motion with his hand. A bone graft with a couple of screws.
He asked me if I'd been on the internet and, fearing reprisal, I said no. I'm not sure I have googled bone death, honestly. But that's what he's watching for. A ct-scan in August, maybe. We'll see. 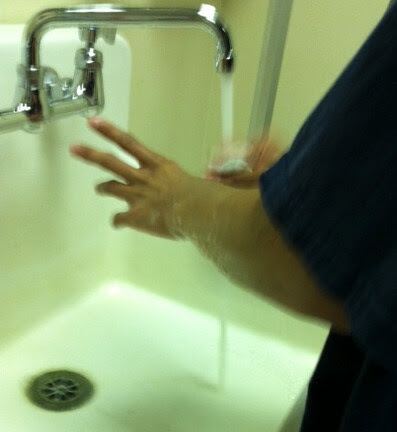 The washing up felt pretty good. The realization that he'll have a cast in Japan was a little tough. 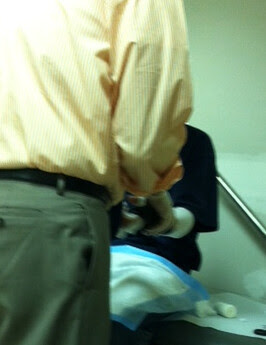 But they had black plaster wrap this time and that cheered him slightly.

They just make a small incision here and graft some bone from this part of your arm - it's curved just right and fits perfectly. He worked the plaster wrap around the PS3 controller that we brought with us - as he has before. I just wanted to hug him, the doctor. He's just so nice. In truth it was Youngest and me who could have used the hug, probably. 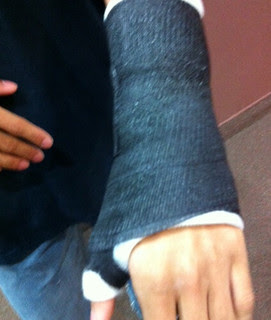 I'm going to buy him some nifty things to wear in Tokyo.
He's going to have the trip of a lifetime.

Lucky indeed, but it tugs at my heart a little.

Susie Sunshine said…
I'm so sorry. But hopefully, hopefully this will do it and he won't need the invasive stuff.

Hugs all around from Michigan.
4:47 PM

Loretta a/k/a Mrs. Pom said…
That definitely sucks. But I bet it will bother you more than him. Kids are amazingly resilient. I don't think anything could ruin a trip to Japan at his age. Hope it ends after this 6 weeks.
5:42 PM

The Coffee Lady said…
I don't tell you this to try to trump you but rather to attempt to comfort you, but recently Eldest had both her legs literally cut off and then screwed back on at a slightly different angle. It's okay. It's okay.
5:58 PM

kmkat said…
Poor Youngest. But the trip to Japan should fix everything, or at least distract him sufficiently that he will have a wonderful time.
6:21 PM

my youngest has his Very Important Panel interveiw this morning - 4 years of study at university resting on the outcome.

and i reckon wrist casts are THE smelliest of them all....why?

Duyvken said…
Aw. Hugs from me for you and for Youngest.
xx
7:19 AM

That smell? That comes from inside a cast?

Well, it's not a smell of love and happiness. Let's just leave it at that.

I get the tugging. Totally normal and to be expected. Onward.
10:01 AM

Paola said…
Ugh.
Not much else I can add without being repetitive ...
You'll have a GREAT trip in Japan anyway!!!
1:54 PM

Anonymous said…
Coffee Lady's daughter: wow! That sounds...intense. Hope she's doing well. My own sister just had to have a knee replacement (she's only in her mid-30s), which was awful enough.

Speedy recovery to Youngest. Again with the forward thinking on how to position his hand around the Very Important Control.

Poppy Buxom said…
My sister had a broken leg that wouldn't heal. She was in a cast for two years and they finally did the bone graft. It worked and everything's groovy!

Except she's really athletic and balked at restricting her activities. And when her orthopedic surgeon found out she'd gone downhill skiing, he told her if she went skiing again, he'd wring her neck. A genius my sister is not.

But Youngest *is* a genius, so I have fear that after his surgery, he'll take up Ultimate Skateboarding (or whatever the kids are doing these days.)

And of course, he'll have an amazing time in Japan. And the black wrap looks kind of steam punk, so.
12:43 PM