Last night when Youngest decided to go out free-running, I said: ooh! bring an inhaler...and your phone!
And he said, I've got my epi-pen!
Off he went.
Then I had a whiskey and K went to fetch Oldest from the train and Youngest returned.
I'll just ice it down! He said after he returned kind of banged up.
K grumbled and I sprinkled some arnica under Youngest's tongue and had a quick look and we went to bed. 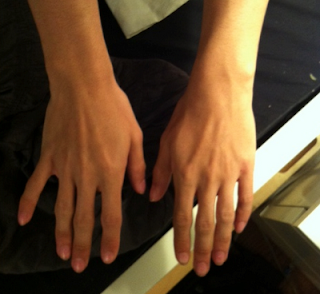 (His left wrist between thumb and arm.) 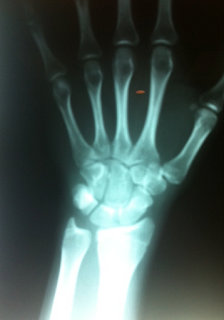 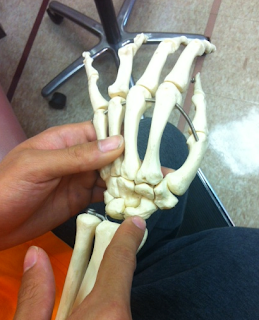 He was doing this:


and now he has a bright white cast which comes off just three days before his trip to Japan.
He's cracked his scaphoid right in half. Fortunately (we are told) he did it at the best place to do that - at the top of the bone so blood will still flow toward the bottom of it. Any lower and we'd have been talking about surgery and screws. Of course, we won't know for sure if it has healed properly until we look at it again in July. His doctor (the same guy who built a cast around a PS3 controller that other time) will determine then if he has healed, if he needs the cast for another six weeks or if Youngest needs surgery.

Crazy Mom! said…
I think Curly has had about 8-9 casts, all on his arms and hands. We've had a couple on his wrists, so I know the drill. *sigh*

Anonymous said…
Holy~! Sheesh! Get well soon, Youngest. Tell us about Japan when you can.

KPB said…
Ah right. Not the best day in Tuvalu then.

Youngest has rather lovely hands though.
5:30 PM

alice c said…
Tries to think of a bright side.

Paola said…
Now I am laughing at Brizio's stitches.

We can pray, we can chant, we can comfort you with words. Fact is, this sucks and the timing makes it even worse.

IL sahll hug you and think of yo uno matter what though!
2:41 AM

The Coffee Lady said…
This just goes to show that everyone should be sitting down with a whisky. It's safer.
6:39 AM

Unknown said…
Have you seen the Humans of NY tumblr? I just saw it for the very first time and instantly thought of you:

SmitoniusAndSonata said…
Having broken my wrist recently , I'm full of admiration for his holding out that long before going to the hospital . Respect !!
8:03 AM