I think this is the second real sick day I've ever taken. I usually reserve them for taking Youngest for his injections (originally a two year plan, now a five year plan, highly successful) as parents at my company are allowed to use sick days to take children to the doctor.
(Side note: I am working on getting used to thinking of Youngest as an adult as he is turning 18 in a matter of weeks, but it is difficult. In my head he is nine.)
My plan (aside from using many parens on this post) is to dose up on cold medicine (OTC) and return to work tomorrow as there is a charity event in the evening that I helped fund raise for and want to attend.
Of course this will involve much laptop time.
I've already made note of several things:

The Sartorialist is right. It has been so warm that everything has buds and blooms but the past couple of days have been breezy and colder. We wait.

Tumblrs are often so pretty. There are a bazillion of them. One can get lost.

Every so often I check in at Moment Junkie. Today I found this.

Filed under Rider Of Shame for this week:

My brother (who now commutes on the same train line) and I are having a little contest. He's got video of someone tearing their fingernails off (no clipper!). You'll never guess what this lady is doing on the bouncy ride home, so I'll tell you.
She is separating her eyelashes with an open safety pin.
CAN YOU BELIEVE IT?!

On the same train ride I spotted - 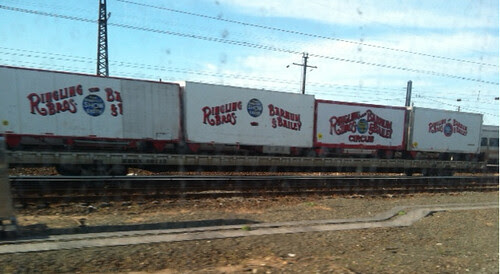 the CIRCUS TRAIN! I love when the circus train is in town. There are vehicles on it and animals and people live in some of the cars.
The elephants get walked through the tunnel into the city!


Don't get too excited. There's something afoot at the local supermarket.

Bread. Moved. Things are never dull at home either. 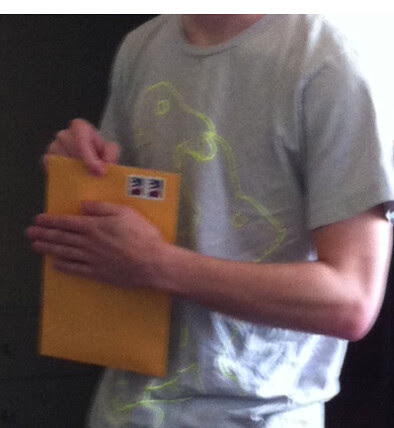 Middle reports, solemnly, that this is the first time he has ever mailed anything paper.
BELIEVE IT.

alice c said…
Get better.
Quickly.
I can't be having you ill because it harshes my mellow.
4:47 PM

Paola said…
I checked your blog now: It's 11:06PM and I promise I'll check those in the morning.


Stay warm and have sweet K pamper and cuddle you. And maybe some udon soup will do yo good as well. I know he can make some mean Udon noodle soup.

raych said…
The year we were married (so, we were both 25) Joel turns to me and is like, Where do I put the stamp on this envelope? And I am like, ..., and he is like, I have never mailed anything in the mail before. Where does the stamp go?
5:41 PM

Loretta a/k/a Mrs. Pom said…
Did I ever tell you about the 25 year old engineer incredulously telling me about the weird "olive green" mailboxes they have up where he lives? And they have no slot to put a letter? What's up with that.

L.P. said…
Hope you feel better fast so you can go to the charity event!

I grew up in a Cape Cod style house, ironically in the middle of the landlocked Midwest.

It's hard when your Youngest turns 18-- mine just did 3 weeks ago. I partly feel a sense of relief, but mostly still think he's nine as well. Of course, I'll never tell him that. We are still waiting to hear from colleges-- so hard! How's your Youngest holding up?
8:42 PM

Anonymous said…
Yeah, the safety pin thing.... As a former Paramedic I can tell you people do REALLY stupid things. A lot of them involving eyes. I will never use bungies with hooks on the end... Just sayin.

Scot said…
Go here and check out the picture he posted yesterday(Tuesday) Then backtrack a page or two and and listen to some of the music he posts.
http://colt0n.tumblr.com/

Yesterday he had that picture on his tumblr that had incorporated a screen cap from that video you posted.
He's a strange little guy(as in, he speaks Californian - So~Cal Bro!)He was a college DJ on itunes and has introduced me to alot of great indie rock.

The Coffee Lady said…
I don't believe the safety pin thing. Or the letter.

Anonymous said…
I'm FREAKING about the safety pin.
A circus train!
You always have the best links--thanks for sharing!
10:25 AM

Anonymous said…
I was hoping there'd be a giraffe's neck and head poking out of the top of one of those cars on the circus train. With some balloons. Oh well.

I don't think I do believe Middle and the Tale of No Snail Mail. The child has never mailed his grandma a thank you card? Or sent a party invitation? Or hasn't had a pen pal? Odd!

Sarah Louise said…
I have an English degree but no band, I do not near Portland. But I would most happily live in a bungalow.

Hope you are feeling better by now.

I can't look at tumblrs at work which is probably good. The library filter calls them "pornography." So I rarely look at them because I forget when I get home. It would probably be a good thing to do on a sick day.

KPB said…
i haven't checked in for a while - life's been manic here and then I was away for a couple of days and well, I'm saying all this to say that just being here is making my heart swell.