it's bacon, cooking in bacon fat

The team the boys have been traveling with (Orlando before Christmas, Minnesota last week) are chow-hounds. I wouldn't exactly call these guys foodies - it's more that they enjoy big food, food on a grand scale, king-sized food.
At the same time, you may remember, we gave K a smoker for Christmas. So, he's been busy practicing with pork and we've been the beneficiaries of ribs and homemade bacon and kielbasa. Last week, at Manny's Steak House, the crew had a Colossal Australian Lobster Tail, the Bludgeon of Beef and some bacon. But this wasn't just any bacon. They showed me pictures of the bacon when I picked them up at the airport. Yes. They were talking about the bacon just after they got off the plane. And though they had worked many long hours and could barely string sentences together (Middle had been up for 24 hours) they talked about this bacon.
You can guess what's going on in my kitchen right now, can't you? Thrilled to discover the can of bacon fat in the fridge and, after careful research, K determined that it was a bacon confit and he's on the case. Bubbling away in my oven, in a pyrex loaf pan of champagne-colored fat, is a slab of homemade bacon. I am told that it will come out of the oven (after several hours), dry overnight and then get fried.
I'm hoping the alcohol I have this weekend in Chicago will help clear my arteries.
That's they way it works, isn't it? 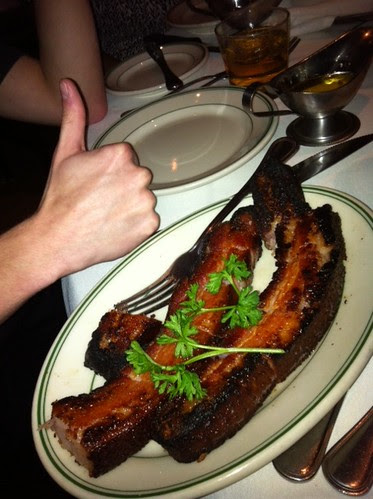 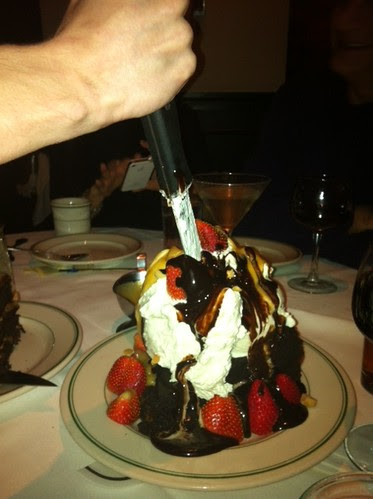 KPB said…
You know the thing that thrills me most about all this is the Australian lobster. Even if lobster is the rat of the sea.

And I am SURE Joke will have something to say about this bacon 'thing'. He is well versed in all things porcine.
12:45 AM

kmkat said…
I've been to Manny's! Although I am pretty sure I had something a lot smaller than the colossal lobster.
1:45 AM

Paola said…
Oh, I was thinking about Joke too ..
My LORD, that is quite the load of fat, topped with fat and with a side of fat.
And of course you are right, the best cure is alcohol with friends.
Go girl.

Duyvken said…
Oh wow. You need a vegetarian to help you with that parsley and, as it happens, I am free tomorrow. Then you'd all be too full for dessert and I'd have to eat it all myself. Yum!
5:12 AM

Loretta a/k/a Mrs. Pom said…
If I still had a gall bladder, it would have to be removed just from reading that post.
6:47 AM

Anonymous said…
There WAS a vegetarian with us, believe me they brought her an entire produce section.

Ginnie said…
My nephew has had a smoker for about a year and a half and produces a steady stream of pork products as well as smoked cheeses and...whiskey. Has K tried whiskey yet?
11:52 AM

My husband would love to hang out with you guys. He's all I'll have meat with a side of meat--with some bacon, of course.