the week in pictures

Okay, maybe only part of the week.
In no particular order...

Merry Christmas! It's a good thing we did some Christmas shopping as the world seems convinced the holidays are around the corner.
I've only been to outlet centers a few times in my life, and, I guess I've never been during this time of year. I didn't know shoppers wait on enormous long lines to get into the stores. And, after you wait outside the store...

there's an even bigger line inside to pay! We were willing to wait to get into one of the stores as we had it in mind to purchase something, but it was crazy. I've never seen such big crowds so loaded down with things. There were shoppers who had brought rolling luggage to carry their purchases!
We realized, later, that this wasn't a bad idea.
What did we buy? Presents for both Grandmas, new shoes and a coat for K, new coat and a scarf for me and... 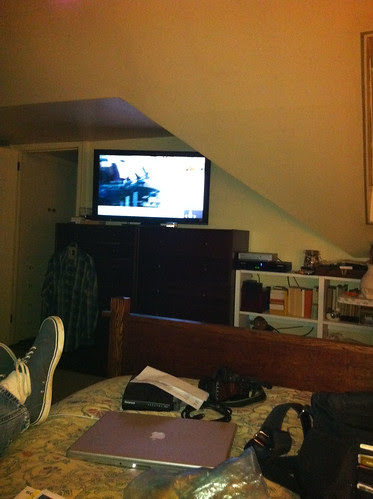 a new television! (Our Christmas present to each other.)
This is a very big deal for us. We bought the television in our room when Middle was a baby. It is 27 inches wide and we got it for our living room. That's 20 years ago! We were watching it last night and I nearly cried as I couldn't read anything on the screen. So, it was either binoculars for both of us or a new tv.

In other news, two kind gifts were given to me this week: My friend A brought me this luminous scarf from Paris,

And my pal D decided that "a person shouldn't have to wait too long for someday to come."

Inside the envelope was a pair of Wolford tights.
I think I had said something about someday buying myself a pair.
Treasures all around me.

The company I work for hired out a party bus for the next couple of weeks and had it stop by the office so we could see it.

Another first for me.
It's being used for a tour. And there's a huge truck that makes snow too.
I'm guessing this information only furthers your confusion. (Hah!)

I was admiring the promotional cards the Art Director down the hall received last week when he showed me his favorite.

Must run. K has just made me pasta with cauliflower.

Paola said…
Holidays ARE around the corner, especially for you guys celebrating Thanksgiving which officially opens up the hoopla.
Oh yes baby, LOTS of lines in outlets.
Congrats on your new TeeVee.
Your company is AWESOME.
Pasta and cauliflower is yummy.
You are very much loved.
5:03 AM

Unknown said…
I hesitated before clicking on the Wolford link, as I can't afford to fall in love with any expensive fabulousness, but I couldn't resist the lure.

Wow! I'm in the "Someday" camp now, looking forward to when someday is THE day.
2:45 PM

Scot said…
I thought we'd be in for the full court press NEXT Friday, boy was I wrong! Some of the radio stations here are already playing Xmas music and PBS has already played a holiday show.
I bought a Kitchen Aid Stand mixer and the sales lady asked me if I wanted it gift wrapped! I told her no thank you, I was buying it for myself and they put a BIG red bow on it anyway. (So much for the BluRay player!)
The weather boy just said "we're not 'specting snow 'till next weekend." 'SPECTING? I think he's got some 'splaining to do...
7:21 PM

Anonymous said…
Those lines would give me hives, but I'm pleased to read that you're surrounded by treasures. You're the kind of woman who appreciates that!
I bet your new TV makes all things crisper and brighter--that's what happened when we got a new one in our bedroom (which was similar to your old one from the sound of it).
12:08 PM

And the Art Director's favorite is seriously creepy.
3:22 PM

Anonymous said…
do you remember the "he knows when you be sleeping?"(he used a butter tub as a mute iirc).
8:53 PM

zedon said…
Purchasing a robe is a wise idea for any woman. In many cases, people choose to give robes as gifts. ladies robes for a variety of reasons. Therefore, they are used and needed by almost everyone. Robes make wonderful quick cover-ups when company unexpectedly arrives and catches you in your pajamas.
1:36 PM