Said by Youngest in a small, squeaky voice: you know, mom, If you watch the movie `Jaws' backwards, it's a movie about a shark that keeps throwing up people until they have to open a beach.
Admittedly, he didn't write that, but I made him say it a few times so I could learn it.
Then Middle got involved: don't tell her stuff from the internet!
Apparently, I kill funny things from the internet.


I'm having a small hair crisis. There's very little blond left, which I am not unhappy about, but my last few cuts have been off the mark, somehow. I actually think part of the problem is my budget...or, my perceived budget. I think I may have to kick it up a notch and visit a more expensive salon. I'm researching, and, in the meantime, I still look a little like Richard Avedon...with a side of Kristy McNichol. In grey.


Youngest is working on his portfolio. I'm pretty apprehensive about his application but was relatively impressed with a drawing he did over the weekend. Drawing isn't his strong suit but he did a fairly good pencil sketch of Middle. I need to work on letting go of my need to control this process. (Don't I sound so psychologically mature? It's an act.)


Doesn't some spaghetti with cauliflower and speck sound good? I think we can get K to make us some.

I had a fabulous brunch in town with two wonderful work-friends on Friday.

And I'm eyeing the table we sat at. Another thing I'd like K to think about making for us. 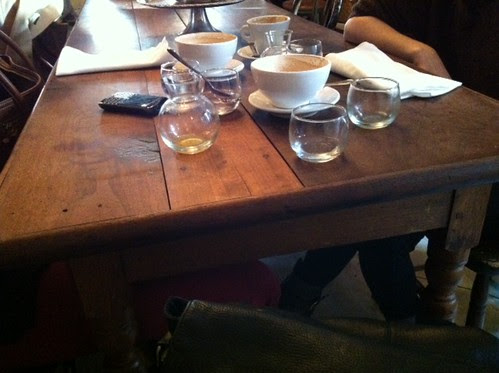 Also still dreaming about these peppers we had whilst sampling holiday foods for our party.
It's going to be yet another kind of party this year - more casual. Wine, beer, sangria and tapas. I've eaten the food twice and it is just extraordinary. I'm very excited.

My Fair Lady was on television on Sunday evening. Have I mentioned that it is Oldest's all-time favorite film? Don't you find that somewhat fascinating. He explained, on Sunday evening, that he believes Audrey Hepburn is the most timelessly beautiful woman in the world. This amazes me.  I am really only just learning his esthetic and I like it very much.

I think I'll have some Black Sticky Gingerbread too, thanks.

Caterina said…
That table is perfect. I want it. So can K make me one too? He, he.

And your Oldest sounds dreamy (am I allowed to say that even though I probably could be his mother?). Anyway, a man that believes in Audrey Hepburn's beauty *sigh*
3:06 PM

Kathy said…
Oh! I saw the very tail end of My Fair Lady and was sorry to have missed the rest. It's one of my favorites, too. Sometimes I think maybe Oldest could have been one of MY kids.
4:11 PM

Scot said…
If you believe that My Fair Lady is MOSTLY about the Audry Hepburn character then you have to believe the movie is all about metamorphosis and hope. A movie about changing one's character, smoothing out the rough edges, becoming a kinder, gentler, and more gracious person. Great subtext for a guy comming into his own. I like Oldest more and more, each time you tell us about him.

Those peppers look WONDERFUL! I'd make chili rellenos out of them.
1:12 AM

Evolutionary Revolutionary said…
Audrey Hepburn IS the most timelessly beautiful woman in the world. Side note - I am fascinated with how Lena Olin can sometimes suddenly look EXACTLY like Audrey Hepburn. http://www.imdb.com/media/rm840142336/nm0000565

But My Fair Lady isn't my favorite of her movies. A woman who is treated like shit but falls in love with the guy anyway? It's a little to close to real life for me. :P

Tell oldest to check out "Wait Until Dark." I think he could appreciate the film (if he hasn't already seen it).
9:18 AM

Jenny said…
My son has recommended I be barred from Face Book. No respect.
Audrey Hepburn: Two for the Road, Charade.
10:02 AM

Anonymous said…
Your Oldest has divine taste. I'm a huge fan of her work. And the Jaws thing made me giggle--that's really funny to me.
Good luck on the hair decision.
11:26 AM

Those peppers, Fabio plants them and I am the one eating them by the dozens! Usually with just a little fresh tomato sauce ...

Anonymous said…
I detest that movie. My favorite and only AH film is Breakfast at Tiffany's. Otherwise, not so much. But I heart Oldest nonetheless.

I think it's great that you know you can't control the getting into college process for Youngest. Because you really cannot. Good for you for recognizing that you have to be letting go. It must be very difficult.

Duyvken said…
I am also eyeing off tables hoping to find a good one for Mr Duyvken to make for us. Those peppers look delicious. Now I'm hungry. But it is lunch time so that's not unreasonable. Unfortunately, I have no charred peppers in the kitchen.
8:21 PM

Ginnie said…
Sorry about the hair thing. Just so your hairstyle doesn't start resembling David Lynch's (we've been seeing a lot of him on the PBS series 'America in Primetime') http://www.imdb.com/media/rm3239353088/nm0000186

And I thought speck was a Dutch thing. Who knew they have it in Australia?
11:51 AM