I was in a parade yesterday and boy are my arms tired.

I spent the night in town, which, as I explained, was necessary as transport into the city at four in the morning isn't the easiest thing in the world. But it was fun, too, as I stayed at J's house and there were candles and soft music and wine and cheese and sausage - all my favorites. We stayed up as late as we could imagine would be prudent and went for a brisk walk at 10:00 to see the neighborhood sights and, we hoped, tire us out.
We dragged ourselves out of bed at 4:00 and hopped in a car to the hotel where hundreds of happy volunteers (I'm not kidding, they smile and praise you and treat you like visiting royalty) outfitted us (very heavy coveralls, gloves, hat, pinafore for your character), took up my pant legs(!) and put us on buses to our balloon.
The next part is where it starts getting rougher...cold (36f) and dark and windy on the street, we wait for it to be time for instructions/photos/reminders. Though the wind had died down quite a bit, our Captain (who wears a headset which provides minute by minute weather information) brought us in (there are about 50 people who handle the balloon) to give us strict and stern information regarding winds. Because there were cross-winds we would be maneuvering through intersections differently. 40 intersections. People at the front of the balloon would pull to the right (west) to counter the winds while people at the foot of the balloon (me and three others) would hold the line to keep the feet straight. This was described with much seriousness resulting in my pal J deciding to take a comfortable route wrangling the balloon from the middle (I cannot blame her) and me lobbying for my friend The Art Director to join me at the back of the balloon. It took some work as he had previously been at the front of the balloon and was tickled to be on television. People in the back of the balloons are not often on television.
But he decided to do it with me! I was very relieved as I would have been alone with professionals and no co-workers and I wanted to share it with a friend.
ANYWAY. Many hours later (ten past nine?) it was finally time to march.
It was tremendously exciting. The balloon is announced, there is deafening cheering, the Captain blows his whistle and we moved off 77th street and wove into the parade.
How many millions of people were on the streets?
It's a 2 1/2 mile walk.
The balloon is astoundingly heavy and somewhat difficult to maneuver. The intersections were, indeed, windy. My hands cramped, my shoulders ached, and my arms shook for hours - but it was one of the most extraordinary experiences I've ever had.
The boys shouted for me at 42nd street and as I veered right to smile and wave at them I got a stern reprimand from my pilot to HOLD MY LINE. (hee!)
I ditched my hat (too warm!), raised and lowered my foot at least a dozen times (hard work!) and only asked for help once.
It was wonderful and everything that goes into the entire event is fascinating and I would love to describe every second of it...but I think we'd need a couple of hours and a bottle of wine.
I have only one photo (we aren't allowed to take pictures but I know people did and we'll share later): 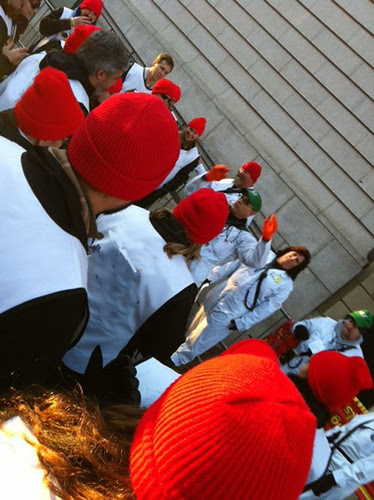 That's our Captain giving wind instructions at about 7:00. The couple flanking him are married and have been balloon co-pilots for many years. He's a burly bear of a guy and she runs back and forth making sure everyone is on point. I can't say enough good things about the people we worked with. One of the pilots ran the lines every 15 minutes or so and asked each of us, by name, if we needed anything, if we were okay, if we needed to step out.
Deflation is almost as much fun and equally as efficiently planned.
This year we were lying on the balloon to deflate it as the Buzz Lightyear balloon passed over us. He's the biggest balloon ever and very impressive. (It should be noted, too, that his team is super pumped and exceedingly boisterous - they have cheers!)
I made my way back to the hotel to turn in my costume and had forgotten that volunteers line the lobby and applaud and cheer for each person who enters.
I feel incredibly fortunate to have participated.

Home on the train (short nap), long hot shower (oof, my shoulders), good long nap (zzzzz) and then up for Thanksgiving On A Roll, the ingredients which my sweet K made on Wednesday.

Now for a cozy long weekend.

Loretta a/k/a Mrs. Pom said…
I'm so proud of you! I feel so lucky to be able to read about your extraordinary adventure! Next year, I am getting up early and going in to see you and cheer you on. So happy that all of you had fun and made such a joyous experience for the rest of us!
9:55 AM

Ginnie said…
Hurray for you! I'm glad it was such a wonderful experience again. When you show us the other pictures, will we know which was your balloon?
10:43 AM

zephyr said…
Awesome!
Now i know 2 people who have been in THE parade...so envious
7:32 PM

jordi said…
I wonder if they create groups for those of us who don't have a company to field a crowd to handle a balloon??? It sounds like one of those "only in NY" experiences that should not be missed.... Love it!!
11:54 PM

Unknown said…
I need the full skinny on Thanksgiving on a Roll.
2:56 AM

Jenny said…
This is one of the coolest things to be involved in. How fortunate you are. What a story.
7:16 PM

Anonymous said…
What a great tale! I told a friend that I knew someone who was going to be a balloon handler in the parade. "Who?" "Well, I don't really know her name." "Huh? What balloon?" "I don't know that either. But she's super excited about it." "Oh."

Anonymous said…
First, your post title makes me chuckle.
Second, I tell all sorts of people about you on the balloon. It's unbelievably cool that you do this, so on Thanksgiving day everyone knows "M knows this lady who holds a balloon in the Macy's parade..."
Third, I really like the behind-the-scenes story of it all.
3:49 PM

robiewankenobie said…
i do believe i know which balloon. i waved at it. did you see me through the teevee?
1:51 PM