You want to know what happened on the train this morning, don't you?
(You can tell my boss is away, can't you?)
Well, I'll tell you.
It was fabulous - perhaps the best part of my day, but we'll see.
As we were boarding, Middle was unusually animated and eager to tell me about last night's Mythbusters. Apparently, it involved proving whether or not a car with a trunk-load of explosives would actually detonate if impacted by another car - but, believe me when I tell you that Middle's description of the episode far outshone (is that a word?) anything I could have seen.
He ended it with: And then, they strapped the car to THE SUN!

He settled down after that and plugged in his headphones. I happened to glance over and noticed he was listening to Eagles Of Death Metal. Good name, eh? He's a renaissance man, ya know. His favorite member of the band died at 28, he told me...yep, he missed the boat, he said, referring to the 27 Club.

I was listening to some Bon Hiver and am especially fond of the moment at the end of Re Stacks when we hear the guitar being set down and the musician takes a breath. Lovely in its stillness.

Behind me, Cole Haan looked dashing in cords and desert boots and across from me sat the lady with one hundred wrap dresses. Have I mentioned her?

16,000 students apply for admission to the school Youngest would like to attend. 3000 are accepted.
Here's hoping he's on the train with us next fall. 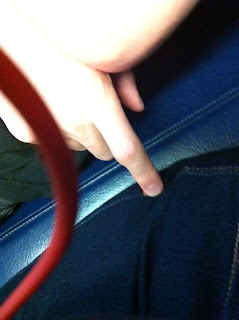 That? That is Middle's index finger. He moved in his sleep and poked me and left his hand that way for 20 minutes while I laughed.

Anonymous said…
I adore how you enjoy your kids.
Googling Bon Hiver now.
11:39 AM

Paola said…
That would (will) be an even more interesting commute, I say.
1:53 PM

Anonymous said…
I'm betting he'll be on that train.

KPB said…
1. Love.
2. Is Bon Hiver the bee keeping cousin to Bon Iver? (we've had this discussion haven't we? About how irritating it is that they run his names together to Boniver when I really want to say Bon Iver. LIKE IT IS WRITTEN. Idjiots)
7:30 PM

blackbird said…
Damn!
It is Bon Iver. But it is ALSO Bon Hiver because it IS Good Winter in French...how very Say La Vee of them!
7:32 PM