Skip to main content
September 10, 2011
I went to a speakeasy last night.
That's the stupidest thing I've ever heard. Alcohol has been legal since 1933. (Middle)
We rang the doorbell, the doorman gave us the once over (seriously, he looked us up and down) and then showed us into a very dimly lit set of rooms.
Soft music played (I think) as we made our way under a copper ceiling to a velvet sofa near black sheer drapes where we, uh, draped ourselves and had expensive and expertly mixed cocktails.
Really. At a speakeasy. If I owned a speakeasy I'd serve gin, whiskey and beer. Not fancy-assed beer, just brown stuff. (Middle)
It had been a long and goofy day during which I: took pictures for a blog post on office trends (being pregnant, Toms, yoga balls),  took pictures of my two friends who traded clothes (they actually went to the ladies room and switched outfits from blouses to shoes), and worked on, among other things, locking down some travel plans for the boss.
I also walked down town with J for a burger at lunch. I mention it as it was not only delicious but because you should watch for us in an episode of Law And Order SVU as we walked directly through a shot being filmed on the avenue. We were on camera for nearly a minute, I'd say.
I'm on the left, wearing black, so you know.
The Assistant Director was somewhat upset but what could I do? J just kept walking! 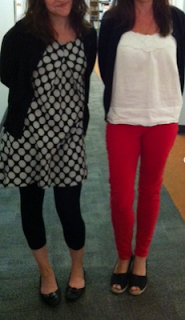 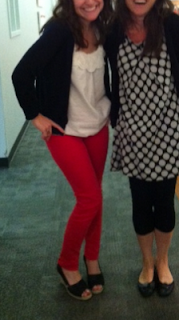 These are the lovely ladies who foiled my office.
Their hijinks continue.
C is in black leggings and polka dots. D is in red skinny jeans and a JCrew smock-top. Both have cardigans. But C's outfit is representative of her personality, as D's is of hers.
I cannot accurately describe how unsettling it was to have them switch...and they spent the day like that. Finally, D felt the need to be back in her own skin, as it were, and they traded back.
Then we went to the bar.

Paola said…
First I thought of Joke, so his kind of place I think.
Then ... L&O SVU I always wath it but it's kind of hard for me what with being in ITaly and who knows when THAT episode will air ... so if you know the season/episode, gimme a shout out.
How cute are your friends?!

I once switched clothes.
With a boyfriend.
And then walked all along the beach.

raych said…
I want to wear what both of them are wearing. I WANT TO GO TO A SPEAKEASY!
2:51 PM

L.P. said…
Good times all 'round! Did you like your cocktail?

And I covet that legging-and-polka-dot outfit.
3:50 PM

Laura Jane said…
and not just ANY wallpaper!!!

The first nightclub I ever went to wa called 'The Speakeasy' I was 17.

Duyvken said…
I need to know where C's polka dot dress is from. Love it! And I will definitely watch to see you on Law & Order - Edna is NY - irresistable! xx
6:54 AM

Anonymous said…
Middle says what I thought about a Speakeasy.
That wallpaper!
Your office mates!
9:04 AM