some pictures on Sunday evening

Every once in a while I like to dump some photos off my phone and onto my desktop.
Sometimes I've forgotten what I've shot, sometimes I've meant to share them with you. 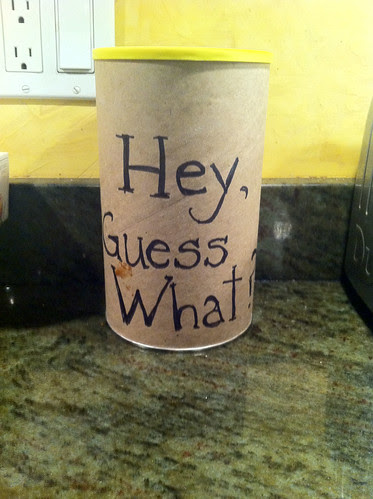 The boys drink that powdered ice tea mix that comes in those huge cardboard canisters. We leave the can out on the counter and whoever finishes the pitcher of tea is charged with making more. The label on the can is so ugly that I tear it off and write the recipe (3 1/2 scoops of powder to a pitcher of water) on the can with a Sharpie.
Sometimes I get bored. 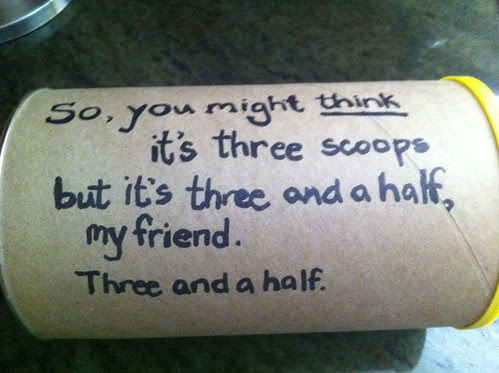 And speaking of signage...did I show this to you?

A large box in my office that was not part of a larger shipment to an industry event, labeled as such by the Creative Director.

Which was then messed with by an Art Design person. (I think.)

Which just got the Creative Director thinking further inside the box. As it were.

Middle was on the internet for most of Saturday while the team he shoots and edits for covered the LeMans.

That would be him in the helmet. They've never shown his face on the show. Funny thing, that.
I had an excellent time texting him while he was on camera.
Once I told him to touch his head - and he did.

Credit where credit is due, people.

Anonymous said…
Love the texting and physical movement/answer. I did something similar when #1 Son graduated from college. There were 15,000 graduates on bleachers in Washington Square; we were on another set of bleachers about a quarter mile away. I phoned him and asked him to wave so I could see where he was. He did and I could. (I was not cool enough to text in 2003.)
10:14 PM

Unknown said…
I love the (possible) art director's response to the bears in a box notice. It had me giggling for several minutes. I wish I had clever and amusing co-workers, but then again, at this point, I just wish I had co-workers...
4:49 AM

RW said…
so what I want to know is how you took a photo of your messages on your iphone? hmm.
9:16 AM

I have been "away"--logging 32 hours of OT last week and was not at ALL able to peruse blogs. Work has been crazy. It's better now, so am popping in to say hi.

Hope your tootsies are feeling better!