It’s been 48 hours. Wait. I don’t know. When did we leave? Okay, It’s Saturday night but I won’t have internet access until at least tomorrow so who knows what day it will be by the time this posts. Couple that with the fact that we left on Thursday afternoon (3pm) and traveled for nearly 24 hours (3pm NLtime) to reach our destination and you may have a vague idea of how I feel.

Suffice to say: we arrived. There were no complications (in fact, all went smoothly) and, aside from odiferous seat-mates, it was an uneventful journey. My friend J was right, however, and I quote: Heathrow is a mother-fucker. I’ll make several suggestions in this post – the first two are: don’t order the chicken curry on British Air and do ask for wheelchair assistance at Heathrow. Honestly, we took two escalators, three elevators and one bus to a stairway to make our connection. Even then, a representative from the airline handed us a wheelchair, pointed vaguely toward a massive hallway and left us on our own. But none of this matters. What you need to know is that we have arrived and hit the ground running. We aren’t running so much now,  on Sunday, but we ran pretty well up till now. There have been several, no many, points to note. Somehow, after making reservations for two very inexpensive rental vehicles at the Amsterdam airport, we arrived and were told that, for no additional charge, we would be driving two brand-spanking-new BMW’s. Oldest got the “little car”  - a four door coupe with a massive engine and I am driving a wagon. The other bonus? Both cars have navigation systems. Now, I won’t understate in either direction here, K did an astounding job of plotting our locations and excursions from home and printing maps and directions. He was ready with all kinds of material to assist us with our day trips. But the cars came with nav systems which we would not have paid for and having now driven about 300km and experienced the Dutch cities between Amsterdam and Zeeland, I have to say that we would have been hopelessly lost on several occasions. 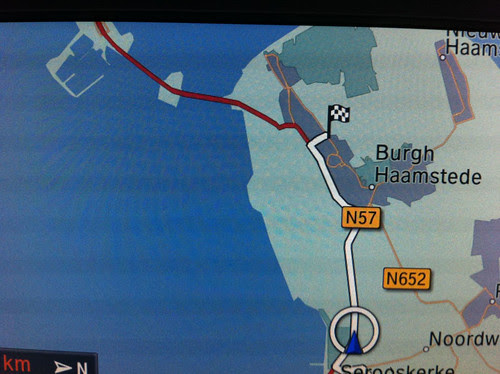 And, where are we, you ask? (Perhaps you do not.) We are in Burgh-Haamstede in a seaside resort community where K’s grandmother came from. In fact, we are less than a mile from where her house stood (or may still stand – we must investigate further). 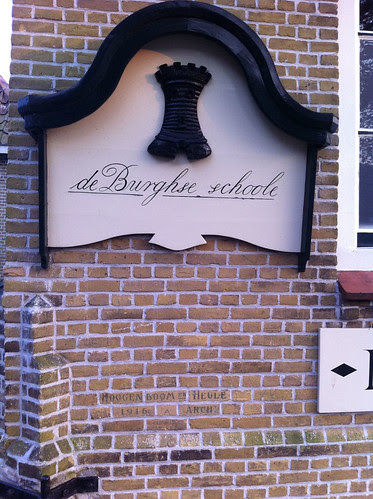 We got out of the car at the supermarket on the first evening and discovered that the school she attended as a child was right next to us. This school has been made into a museum and we have made arrangements, through various sources to make a special visit on Tuesday. And all this goes back, too, to our meeting the parents of a friend of Middle’s who are also from here. J, in fact, has parents close by and her father P is very interested in our learning about the area and its history. They are meeting us for drinks tonight after dinner.

On our first day we rose early and rushed off to see a flower parade honoring the Dutch floral industry. There were a dozen or so floats made entirely of flowers depicting, of all things, Broadway shows. The boys were amused by this wry twist. To have come all this way to see Dutch people singing show-tunes….after the parade, and some pastries, we attempted to travel to The Hague. We made three unsuccessful attempts to enter the city but the traffic and our frustration (mainly mine, as the driver) turned us away.

In a moment of brilliance we decided to drive into Delft and, with the help of a kind stranger, found an underground parking garage. (Welcome to Holland, a guy in a crowded parking lot exclaimed, always a traffic jam and no parking!) 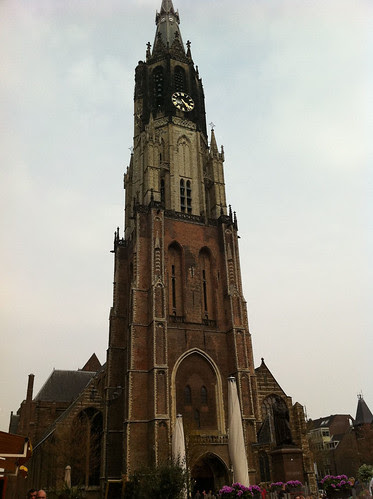 It was market day but we stopped in a pub first. Seriously, the amount of beer and cheese  we’ve consumed in two days is astounding – not that you’d be surprised to hear this. The pub was wonderful. Local people were drinking beer and we sat at a big round table. The barkeep described the beers to us and brought us a tray of meats and cheeses. Oh, the wurst! Oh the cheese! Oh the crowds! 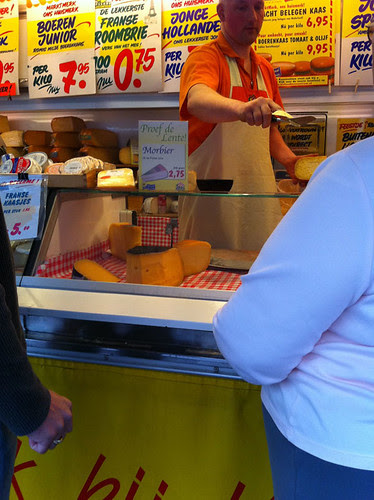 Back out on the square we bought some Delft ware and admired candy and toys and flowers (which are four bunches for 5euro if you are Dutch but three for 5 for me) and had a wonderful time watching K eat raw herring. If you don’t see photos here click into my flickr and look! This morning we had breakfast at the local bakery and walked through the town while everyone was in church. The boys have gone over the dunes to explore German bunkers.

I’ve put in a load of laundry and am sitting on the patio listening to children play while the birds sing. I’ve read that the weather is so variable that the Dutch sit outside on days we might not consider warm enough and that certainly seems to be true.

Paola said…
I was SO waiting to hear from you and the wait is always worthwhile.
Well Happy Birthday GranBird

Paula said…
They do that in Iceland too; sit out on days you wouldn't ordinarily.

When we lived there we'd see Icelanders in a sunny spot protected from the never-ending wind. And? Sometimes the women would strip down to their bras and sunbathe a bit.
11:31 AM

Crazy Mom! said…
What we REALLY want to know is:

How are the toilets?

Jennifer (Jen on the Edge) said…
I'm so glad you're having such a nice time.

And, yes, Heathrow is a mothereffer, if for no other reason than that one must walk miles and miles to get where one needs to be.
2:02 PM

Anonymous said…
Did the entire bird flock go to the Netherlands? What a lovely experience -- have a beer and a wurst and some pastry for me :-)
3:28 PM

Somehow it feels really good just knowing you're in the Netherlands. :)

Terese said…
After breakfast this morning I made a beeline for your blog hoping to read about your trip..and you are there. bb at large with brood. The boys are really doing well. Glad you survived Heathrow which I always think of as it's own small country.
5:56 PM

Mary said…
You have made me very happy and a little Holland (fatherland) home sick with this post.

If you went to Delft you didn't really need to go to Den Hague anyway.
9:43 PM

Ginnie said…
So glad you are finally there and relishing all there is to see and do. And re: the "take advantage of the weather" thing - these are really the hardiest people ever. Bikes as transport regardless of weather or distance (G's grandkids ride 30 minutes one way to secondary school all year round) is one indicator. And once when we were visiting G's older daughter, her husband took the three kids(then little - 3, 5, and 7 yrs old) out for a walk in the pouring rain just to get out of the house and into the fresh air - for about an hour. No one but me seemed to think this unusual.
11:18 AM

(thinking of you cycling is brightening my day at the moment)
3:24 AM

Anonymous said…
Anne Frank House? Van Gogh museum? I hope they are on your agenda. I want to visit them someday, and would love to hear your take.