I'm sitting in bed with my decaf. This is a new tradition that was inspired by the Buxoms. Mr. Buxom, you see, brings his wife a hot cuppa in the morning and I told K how lovely I thought that was and lo! Coffee in bed!

So.
I could never, in a million years, transcribe the week's events - though nothing extraordinary occurred.
We went on a date on Tuesday and it was lovely.
Work was very busy (my boss has a new schedule wherein he is not in the office on Tuesdays which results in the experience of two Mondays: Monday the first, the real Monday and Monday the second, Wednesday...am not liking it) and there seemed to be an awful lot of people who needed consoling. Is it a surprise to me that people turn to me for consoling? I'm thinking about it.
Will my friend C get to move offices?
Why does the new assistant dress inappropriately.
I'll stop now as we don't want me to get into trouble.
Someone I've recently gotten friendly with (she sought my counsel) brought me these, from China: 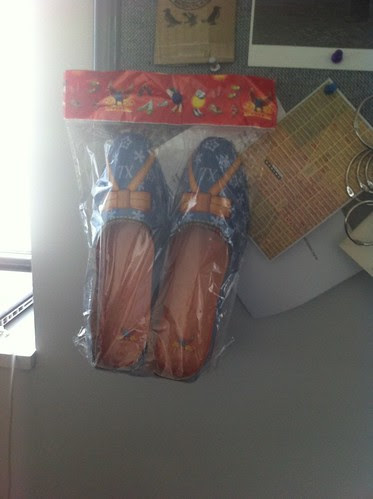 Not a great shot, I know. They are paper, 3 dimensional, fake designer shoes. One burns them to ensure that a dead relative will have beautiful footwear in the afterlife.
(A lot of people in the office didn't get why she'd give them to me, but you do, don't you?)

Two people snagged me to play Words With Friends.

I am enjoying it. I have played six or seven games and won one. I was winning a second game when it was, somehow, canceled by the company. One of my friends has a vocabulary similar in strength to mine and so she is a good match for me. The other opponent is very tricky - he has a vast knowledge of seemingly improbable two letter words.

Yesterday, I had not heard from an assistant in Paris regarding a phone call. I gathered my wits (I keep them in the drawer on the left of my desk) and called her as it was an email she was ignoring. Wits gathering was necessary as she doesn't speak English and, I don't know if you remember this but I am mute in French. I understand French pretty well but get embarrassed and cannot speak it.
She asked, at the beginning of the conversation if we could speak in French and I said I'd try...and I did, both try and speak, and I was successful. The call is set and I was smug. For about 45 minutes.
Bon week-end, I told her.
(Of course, when I say I spoke French you really must hear me do the conversation as it can only be described as French Like a Four Year Old.)

J and I went to lunch yesterday. We are sampling burgers far and wide and yesterday's was award winning. We don't give awards, but if you come to my city I'll point you in the right direction for the burger of your dreams.

It's a lovely joint full of branches and farm tables and jars. I love jars!
We sat at the bar, something we love doing, next to a beautiful fellow and his absolutely picturesque eggs.
The bar was lined with jars of olives and citrus peels and fresh herbs.

The burger was pretty damn fine, served on a soft, not-too-big roll, with lots of melty cheese. The fries were salty. It was all gorgeous.
I really like lunching with J. She's dryly funny and smart and eats.
I like a good eater, she told me and I smiled and nodded. So do I.
I love her, actually.

After the big lunch we had planned to walk back to the office. It's a great walk through three neighborhoods.
The first is commercial and noisy.

I spied this wonderful, huge, fan-like thing on the street and wanted it. I like the big wheel on the side and it was gently spinning in the breeze. I wanted to give it to Middle.

The next neighborhood was residential and breathtaking. We stopped and gazed at carriage houses and decided where we wanted to live. The street was lined with trees (no leaves yet) and it was silent but for birds.

The truck of my dreams was parked in front of my carriage house.

This is my neighbor's Vespa.

Back at the office I received a box of brass acorns. Truth! Several different styles, in different finishes were mistakenly sent my way. I opened all of them in an effort to determine their origin. A metal company in China had sent them to someone with a similar name down the street.
Now that I type this I see: a second gift this week from China. Acorns symbolize long life.
I'm smiling now.

Can you get a hold of some hyacinths? 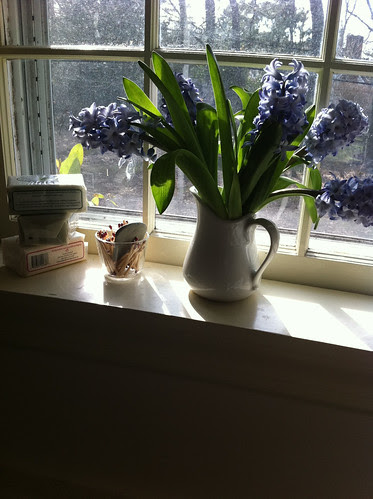 Their scent is heady and exotic and you must have some.
We had them next to our bed as they are K's favorites but they made me sneeze.

On the sink, however, they scent two rooms.
I'm in love with them, too.

NorahS said…
That was a post worth waiting for! So may wonderful things: paper shoes! burgers! hyacinths! Bon week-end to you, too, bb.
9:29 AM

eurolush said…
Woderful post full of so much goodness...beautiful, heady hyacinths, paper shoes to burn for the afterlife (!) an adorable Vespa in just the right colors, and the truck of your dreams...which is, I swear to god, my father's old truck. I know it is. We lived in New York--30 min from NYC. He sold it when he moved (1994?). I will try to find a photo and send it to you. Then you will have PROOF.

Anonymous said…
Was that a vintage Jeep? We have one of those -- a 1989, which we affectionately refer to as "Da Yeep" -- and use it to plow the driveway all winter. Or useD, until DH broke it in January trying to ram the piles of snow farther back from the edge of the drive; he knew he would need more space for the next 2.5 months of snow. Right now it sits next to the garage, forlorn, waiting for spring when it can go for a recuperative visit to Lennie The Mechanic.
12:34 PM

Loretta a/k/a Mrs. Pom said…
Mr. Pom had a long tradition of bringing me coffee and bagel in bed, but once the dogs came, it lost its charm. (Bagel+ coffee+bagel-eating dogs= disaster).

Anonymous said…
note to self - keep "wits" in the drawer to the left of desk!

what splendid advice, bb you are a woman of great wisdom and i salute you...again

Little Miss Sunshine State said…
I LOVE it when you take us out for a walk!
9:47 PM

Paola said…
It was definitely worth the wait.
Lovely, places, nice people, good food, smell of flowers ...
What else could one want?
12:47 PM

Liz said…
I know that Vespa! It was my cell phone background picture for probably three years. A FANTASTIC street that I miss down here in Atlanta. I am also pretty sure that the Vespa has never been ridden, and is only there as part of the decorating scheme. I've done my research on it.
9:55 AM

blackbird said…
I think I'm disappointed about the Vespa!
10:26 AM

Anonymous said…
I loved this post too. I hope J reads it. She will smile.

The Coffee Lady said…
Why in god's name are you drinking decaff?
4:09 AM