a fine night out

Leo Kottke is one of those acoustic guitarists who can make you wonder if the instrument he's playing is the same as the one that's so woefully underserved by more or less all other guitarists. Since the late 1960s, when he began releasing records of songs he started playing in coffee houses, Mr. Kottke has developed an elaborate instrumental language that draws on earthy country, blues and folk while drifting through flights of fancy that lend his otherwise traditional guitar sound an otherworldly mystique. Does he have more strings? Some alien kind of wood? Maybe an extra finger or two? Not surprisingly, Mr. Kottke is best heard live, with agile ears and eyes prepared to go wide when his finger-picking reaches toward warp speed.


So, first we went to a sweet little gastroteque for some wine and cheese and salsify.
Delish.
We sat for a while and looked at people and tried very hard not to read our texts/emails.
No cell phones in the restaurant! I told K.
It was very pretty if a little precious.

Cell phones outside the restaurant are fine.

We walked further downtown to the venue.
It was a pretty night and we arrived about half an hour before the show. 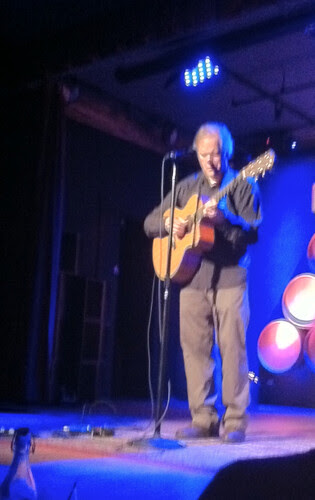 Mr. Kottke was pretty damn fine, I'll tell you.
Look how close we were! (And K shot this blur, I was even closer.)
I had never seen him perform live but, as KT pointed out in the comments yesterday, a very long time ago K did a concert with Leo for a television show. (With the director who did the iPhone app I recorded, remember?)
It was in Canada, I think, and K went away for a while, shot the concert, came home with wonderful stories and THEN found out that the footage was damaged. Unusable.
And, do you know what they did? No you do not. They had Leo Kottke do a second concert and they shot that one too.
I will tell you, having listened to them both about a million times, that the first concert was better.
I had K transfer the audio to A CASSETTE for me and then, years later, to A CD and now, now that we are in the age of the mp3, to my iTunes.
Anyway, as I was saying, it was an extraordinary experience, last night, and he closed with Little Martha which is one of my all-time favorites.
He also rambled and story-told and re-started certain songs several times as he is known to do.
Adorable.
Delightful.

Anonymous said…
And it was! It WAS lovely. So cool that you have a connection to the artist.

PS--I think you write phenomenally well, and when I started reading the italicized section at the top, I thought you had become even MORE eloquent! Then I saw that it wasn't you...but it could have been. I love your prose, but that flattering review was incredibly well written. Thanks for sharing it and your take on the performance and the date.

Harriet M. Welsch said…
Kottke plays a concert every year in the middle of nowhere Illinois county in which I live. I have no idea why. But it's always packed and it's always great. His performances always seem like physical impossibilities.
1:26 PM

Anonymous said…
Kottke is awesome. That is all.
4:37 PM

Jane said…
He's long been a favorite and this was the first time I've actually seen him playing. That was a treat.
6:41 PM

Anonymous said…
When I first read this post, I was inspired to listen to a little Kottke - so I went to the googles (that being far easier than walking to the adjoining room to pull out the cds) and discovered he was soon to play close to my little town!

So I called some friends, purchased some tickets and just returned from a truly wonderful show! He is absolutely delightful - I loved his stories and jokes.

Thank you for providing me with the motivation ...