oh, we absolutely did get lost

My trip to Chicago last weekend was not based on our usual itinerary of eating and drinking and laughing all night downtown. This trip was designed as a house tour. You see, Jen has recently moved in to her very first real house after a long period of research and real estate shopping. Wendy, too, has a new house in that she tore off the part that was falling off of her adorable home (a back-entry mudroom sort of space) and dug herself (well, not really herself, though she could have) more basement as playroom for her kids and new craftspace for herself. Finally, one of our goals was to do drive-bys on houses that starred in John Hughes films (and schools and skating ponds and ravines).
So, where was I?
The getting lost part?
After a lovely lunch we had mani/pedicures and relaxed and gabbed some more and grabbed some coffee (some in our party must be caffeine-fueled as often as possible) and had a quick peek at Poppy's house. We usually hang around Poppy's city house which, you may remember, was heavily damaged in a fire. The Deluxe Apartment In The Sky is still being furnished and wasn't ready for company and some people had never seen Poppy's primary residence. This put us in a perfect location to see Kevin's house from Home Alone and a launch point for dinner at Wendy's.
We piled into Jen's car and set out. Except it wasn't really Jen's car, it was Fletch's car.  It's an extraordinary vehicle, I'll say that, but Jen isn't especially familiar with its workings. And it has many many workings. A special shade, for example, lifted itself up from the rear dash and covered the rear window at one point. Jen had no idea which button did that. And though she dutifully programmed Wendy's address into the nav system we became somewhat frustratingly lost. And when I say frustratingly lost, I really mean sobbing/laughing/nearly peeing with that kind of exhausted/need a drink/confused but funny place you get to after driving in circles with three hysterically funny women.
We made it, very late, and Wendy had gin, which was good. 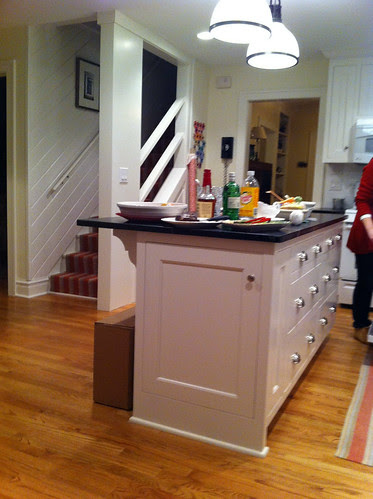 Wendy's house is an adorable cottage-y place. I think it becomes quickly obvious that adorable and cottage-y are not good descriptive words for a busy kitchen. Wendy's family made do for years but the time came for Wendy to get more space, beautiful cabinets and good lighting. And now she doesn't have to worry about her mudroom falling off the back of her house. 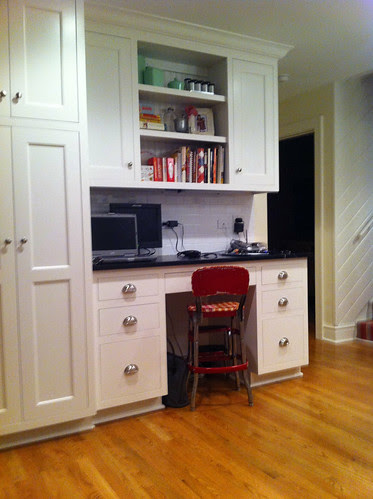 One of the neat things about this new kitchen is that it fits perfectly with the rest of the house. If your home is not a palace why build a palace-sized kitchen on to it? 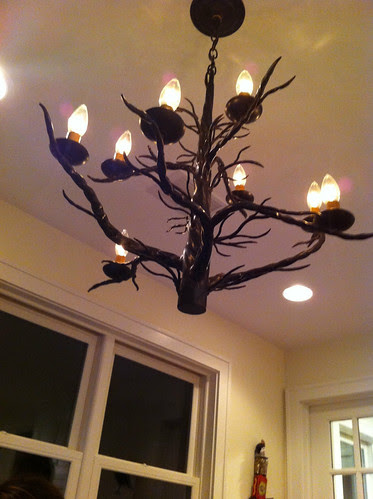 (How pretty is THAT?!)
We had a yummy dinner and returned to Poppy's house without incident (which only highlighted how asinine our getting lost was).

I slept the sleep of the dead... 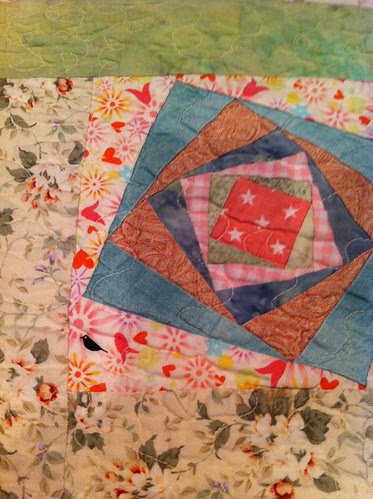 under an heirloom quilt...

with Edna looking down on me.
In the morning, Poppy and I suited up and went over to Jen's house. I'll do my best to protect Jen's privacy as I know she doesn't post house shots very often. 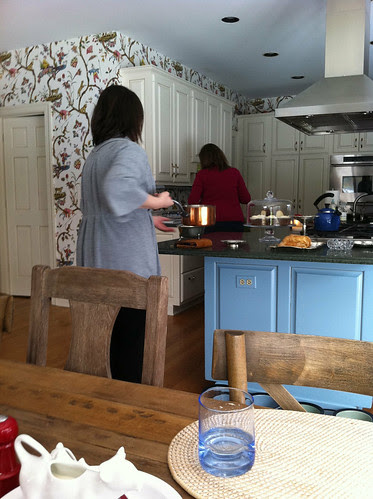 That's Susie Sunshine and Poppy helping put things out for the Oatmeal Buffet (Which amounts to three kinds of chocolate chips, fresh fruit and yogurt, three or four peanut butters and coconut. The oatmeal is merely a vehicle for crazy good stuff.)
That's just one little corner of the kitchen...the kitchen which spans the width of the house...the house that's kind of, I don't know, massive?
It's not obscene or anything, size-wise...okay, wait, maybe it is. But it's so lovely that you can't hate it. (That doesn't seem like a very nice compliment, does it?) (It's hard when you love a house and you know, deep down, that you'll never have that kind of living situation.) Jen's house is beautiful.
And it has many sofas.
And WE stretched out on one of them and watched Sixteen Candles. 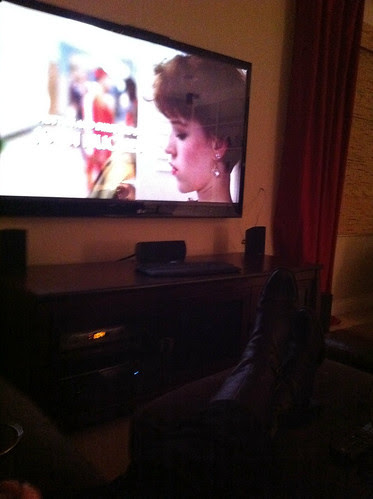 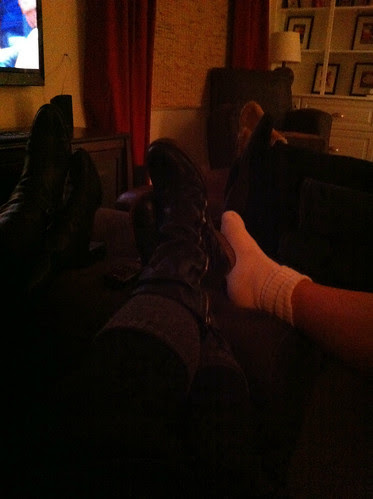 And then we had a magnificent lasagna. Yes. Magnificent. 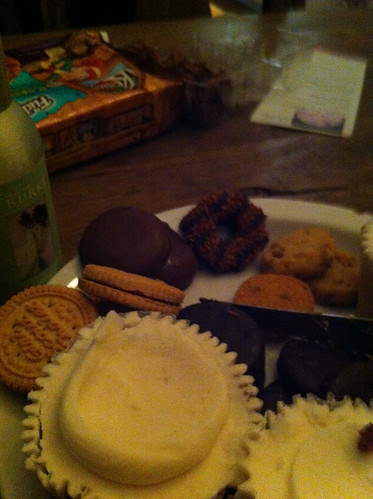 Are the Keebler's the same as the Scout cookies? Hard to say.
Is there enough icing on those cupcakes? Nearly.

Back to Poppy's to sleep, up in the morning, off to a breakfast spot with an adorably adorable waiter, full of adorableness, hopped in a cab, went to the airport....
Yes, I am omitting more uproarious laughter (dog farts), an entire ice sculpture licking episode, and more salad than any woman should eat in a 48 hour span.
I'm also leaving out the mushy stuff as I love these women.
We are each very different. We see each other twice a year. We come from near and far and really enjoy ourselves - and you'll just have to take my word for it.

I had a drink at the airport, before heading to my flight. I sat by myself. It was nice. I boarded the plane, set my things at my seat and went to the loo so I wouldn't have to get up during the flight. When I came back there was an airline pilot, in full uniform, sitting next to me. I assumed he'd like some quiet and donned my uber-cool headphones but he wanted to chat.
I learned about the plane and the route and he even told me a good mayday story.
He was the perfect seatmate and it was a wonderful trip from beginning to end.

Back to work for me now, with spare and funny emails from the girls tickling me through my day.
I kind of need a nap!
Labels: monday

Terese said…
Thanks for the brilliant post of what was obviously a great weekend catching up with your gal pals. That aerial shot of the lake really takes me back to flying in the US in February between snow drifts and storms. The moment of getting lost with GPS is something I always wondered about as I don't use on in the car.
4:13 PM

Anonymous said…
You are the luckiest girl in the world to have had such a time.

PS--one time, I was late late late for a flight, and hustling past all sorts of people to get to my gate, including a uniformed gentlemen whom I later saw entering the cockpit of my plane. I felt silly for impatiently passing him, because clearly, we weren't going anywhere without HIM.
6:29 PM

Wendy said…
When on earth did you take the pictures? You amaze me with your stealth photography.
8:22 PM

Scot said…
Wierd coincidence, I just engraved "In appreciation of Fletch's dedication..." this afternoon.
Sounds like you had a great time, good for you!
8:42 PM

Susie Sunshine said…
Pretty sure they scoop that ice directly out of the lake and shape it into Cupid sculptures.
8:57 AM

Poppy Buxom said…
Ho ho ho, it only looks like I was helping Susie Sunshine with the oatmeal buffet. I was looking at one of Jen's catalogs.

That's so funny that you took a picture of Edna. She's a talking Edna, you know. And she looks like Anna Wintour which means from now on, I'm calling you Talking Edna.
1:10 PM

Makes me long for a hot summer night in an amazing Chinese restaurant in NYC.
3:13 PM

Paola said…
Twice a year I wait for this because it never fails to bring many smiles on my face.
You've created a something special.
2:54 PM