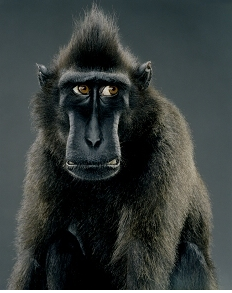 Jill Greenberg
(That's the photographer, not the monkey.)

I signed on to a video chat with this photo today. I was chatting with Middle and he was tickled. Poor Middle, submitting his Freshman Project and sweating out the details and the deadline. In truth, I don't feel too badly for him as I think it's important for young people to sweat over such things. It gets them ready, I believe, for mortgage applications.

In the meantime, I've secured classes for Youngest at Yet Another Prestigious Art School for the summer. I had to do it (as opposed to him doing it himself) as minors could not register themselves. It involved queuing up, via computer, at six in the morning and I was completely nerve-wracked as it is a popular school with very limited registration.

I accompanied my friend J, newly returned from Spain, to a sample sale this morning. I say accompanied because I didn't even bring my wallet. Imagine: boots originally priced at $685 were marked down to $250. Hence the not bringing the wallet.
The sale was utter mayhem. Just as we entered the very large room a woman pulled off her top and tried on a dress ($200, marked down from $600). Women had piles and piles of shoes on the floor in front of them and were trying on dozens of styles. It was one of those sales where it's more fun to watch the shoppers - though I did see a very nice dress which I can only describe as a black flour sack. Lovely, but crazy.

I got my hair cut. Trimmed, actually. I told my stylist that everybody loves my Anna Wintour and he proceeded to cut it in 15 minutes flat. Dried it in that time too, which is a shame as he's not cheap. Anyway, he's good about the fact that I don't let him color it and tend to hack at my bangs between cuts, so I can't really complain. That and the fact that he is the sixth guy I've tried since I've started working - and the cheapest.

K and I are drinking the Limoncello he made. He had to cross state lines to get the grain alcohol and worked hard to get the recipe (Paola's mother's) just right. It's good but it just isn't the same. I suppose it's the setting.
The last time I had Limoncello I was sitting at Paola's mom's kitchen table. We were laughing and a little sunburned and so full of good food. We were welcomed like family and tired from playing so hard. When I smell the soft, lemony aroma of this Limoncello I can feel what it was like that afternoon...eating such good food, laughing so hard with Fabio and Paola, feeling so close to someone else's parents.
She's such a lovely, caring hostess, our Paola.
I would encourage anyone to visit her world.

I was going to color my hair tonight. I have a very clear white stripe at the part.
Alas, it is 8:28 and I'm drinking Limoncello...and thinking of Positano.

Oh, for lunch at Da Adolfo!
Labels: Italy and alcohol

KPB said…
Look at the stratas in that rock! Awesome.

Just a little something from me to you xo
12:31 AM

Scot said…
Ok, I've been waiting for you to post anything with the word HAIR in it.
SINCE you brought it up...(!)...I've been needing a hair cut for this wedding I'm going to. I get it cut twice a year whether I need it or not. The fancy salon across the street needs some signs. They charge $55. for a hair cut. I charge $55. bucks for the kind of sign they want. Yes its expensive but so is the type of 2 ply plastic they wany me to make the sign out of. Erik, the owner of, get this, Lady Godiva Salon(!) said he'd trade. I made the sign, he cut my hair - damned nice hair cut, damned nice sign. My question is, and I've asked plenty of people, DO I TIP? Was I supposed to? He didn't tip me, should I have tipped him?
Talk amoungst yourselves.
12:47 AM

Mary said…
Scot - no tip - if only for the absolute logic that he didn't tip you so you needn't tip him!

bb - I am thinking that your reaction to Paola's part of the world is so similar to my little island in Greece - and every time I smell oregano I think of the people who are loved there
3:41 AM

Mary said…
PS although I cannot drink ouzo anywhere but there - drinking ouzo here in Oz would make me vomit a little bit I think
3:42 AM

Anonymous said…
I need a trim. Thank you for reminding me.
10:13 AM

Fannie said…
I am an unabashed Italophile; Limincello, Campari, wine, even grappa (but only IN Italy)! Lord, 9:50 AM and now I feel like having a cocktail….
10:53 AM

Poppy Buxom said…
Clairol Nice and Easy Root Touch Up. Golden Blonde, I think. Takes 10 minutes. I'll bet you can even do it drunk.
11:09 AM

Adriana said…
Is that the Pupetto beach? I stayed at a hotel just above that beach in Positano. And there was a lovely looking man serving drinks at the bar....
12:44 PM

blackbird said…
Adriana - I'm pretty sure Pupetto is on the other side of town...but we were there too!
2:56 PM

Campari and fresh O.J.
Must. Have!
(80 degrees here)
And a surf to soak my tootsies in wouldn't be half bad. I'm sighing with envy. Maybe some nice dreams tonight. :)