For his first real assignment for Art School, Middle had to shoot film. Which is to say: real film. Old school film, which is purchased and developed by the foot. 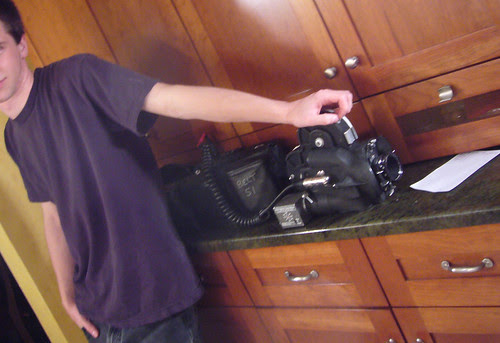 It was a nifty little camera which made a wonderful whirring sound when it was running.

But, when one borrows a state-of-the-art film camera from Fancy Pants Art School, one also gets a lighting package and batteries. The batteries of which I speak are two very large belt-like things with batteries that are just smaller than a car battery built into them. 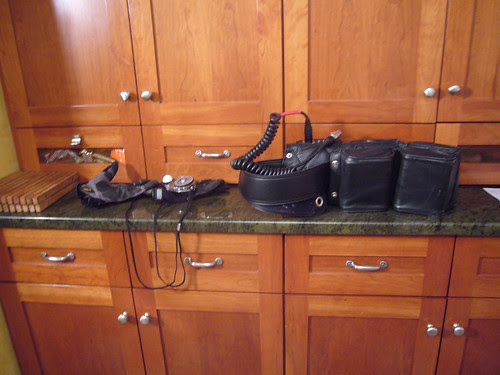 They weigh a lot too, as does the camera in its case and the lighting kit.
We brought the Jeep into town on Tuesday, so Middle could pick all of it up and take it home. He brought the gear down to K's office in a taxi, with his crew, and shot for a while. 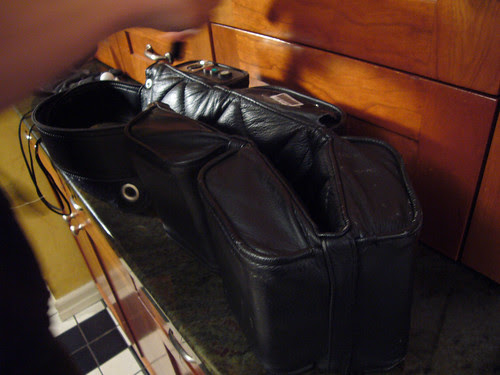 Then we lugged it to the car.

Middle shot all day yesterday (though he seems prudent when it comes to "burning film") and then set the lights for a shoot in the kitchen while I made dinner. 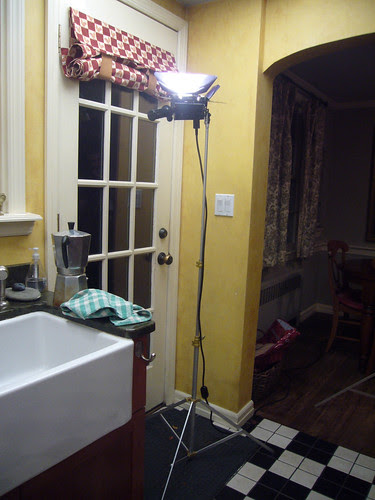 Everyone should have an opportunity to see their kitchen lit for film.
It's an eye opening experience. 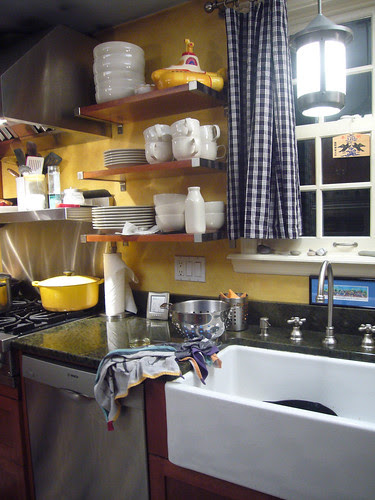 I need to repaint the entire first floor of my home. 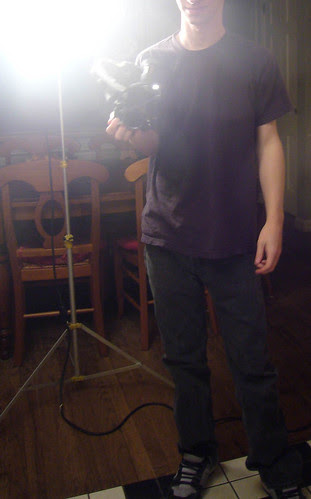 Today we lug it all back.

Badger said…
That is so dang cool.

RW said…
very cool
my husband shoots film
although he buys it in bulk and stores it in our freezer.
9:20 AM

Anonymous said…
That is amazing. Is this the method filmmakers still use? Somehow I'd thought it had all gone digital...
9:24 AM

Anonymous said…
This sounds so refreshing and uplifting.
Something fun, cool.
You're welcome to come shoot my kitchen anytime you like.
Paola
9:46 AM

Unknown said…
I continue to covet your kitchen--the cabinets, the countertops, the sink, the appliances, the tile floor--EVERYTHING!! *sigh* Someday, I can only hope...

And hooray for Middle! Sounds like he's loving the Fancy Pants Art School. As expected.
12:16 PM

Little Miss Sunshine State said…
I love that you were photographing him while he was filming you.

Anonymous said…
I just love to see other people's kitchens. You have a Yellow Submarine in your kitchen; that is so cool. And a yellow enamel pot. I love yellow.
1:27 PM

dan renzi said…
When I was on "The Real World" the cameras came to my family's house to film. Everyone was excited except for my mother. She immediately re-carpeted the entire and painted all the walls.
1:58 PM

robiewankenobie said…
i have seen your dining room numerous times, but i don't think i've been privy to your kitchen. i think i've fallen in love. not in that stalker way, mind you. it's a deep abiding love. okay, maybe there's a little stalking.
2:10 PM

unmitigated me said…
There is a real art to using real film. My husband's degree is in video production (isn't that true of every network administrator?) and one of the guys he graduated with is a professional director. He doesn't get to use film as often as he would like.
3:55 PM

Anonymous said…
The world has NOT gone digital. The vast majority of feature films are still shot on real film.

It is a hell of an experience, but I don't think I'll be going back to it too quickly.

Crazy Mom! said…
What fun for Middle - I envy him.

How is your Favorite and Only Aunt doing?
7:21 PM

Scot said…
Are those beautiful cabinets in YOUR kitchen? I'm so jealous. What's the yellow submarine for?
10:09 PM