My wrists are burned, as is a small rectangle just below my neck.
You know, because you don't actually need sunblock on July 5th, right?

I love walking to the Flying Fish for coffee in the morning.
Today I had a sticky bun too.
The guys went off to get the beach permit and then we packed up and headed to Newcomb Hollow so Youngest could try out his new skim board (which is the kind of skim board that one rides into the waves) at high tide.
Gosh it was beautiful. The air was warm and there was a breeze. The ocean was crystal clear and a couple of squirrels drifted by.
After his first few runs, Youngest decided to put on his wetsuit. (The water was 57 degrees.) After he had done so, I saw that his necklace - his cherished necklace - was hanging out of the suit at an angle which might encourage the chipping of a tooth. (It is a long leather cord with a ring at the end of it - this necklace.)
He removed the necklace and dropped it into my bag and ran off to the ocean.

Sometime later Youngest was tired and cold. He peeled off his wetsuit and grabbed a sweatshirt (also in my bag) and we stood in the sun for a while, laughing and talking.

Fast forward a couple of hours...one gin and tonic later...Youngest has showered and had a snack and gone to look for his precious necklace...AND IT IS GONE.
We go through my bag. Twice.
We go through K's bag, twice.
We search the back of the car.
Youngest is feeling frantic by now and I am happy to have had the gin.
On the off chance that we have lost it in the parking lot, we get in the car and drive across town to the beach. Sadly, there is a line, ten or twelve cars long, waiting to get into the beach. I tell Youngest to hop out of the car and go look for his necklace.
After waiting ten minutes, I decide to drive in through the exit and tell the attendant that "I'm picking up."
I race to the edge of the parking lot, lock the car and run down to the beach where we were sitting a couple of hours earlier.
Youngest is walking back, looking sad.
We go, together, to the spot where we were laughing and talking earlier in the day.
There is a family relaxing on a blanket and they notice us looking around and ask if we are looking for something.
They had Youngest's necklace - they found it soon after we left and had been talking about what to do with it.
They are almost as happy to see us as we are to see them.
And Youngest?
Well, let's just say: tragedy averted. 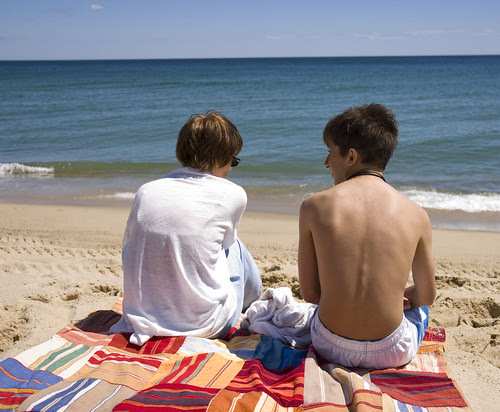 Anonymous said…
Thank god. I love a happy ending. I love that picture too. And it IS a nice blanket.

RW said…
I absolutely love stories like this one.
10:45 PM

Anonymous said…
There's all your good luck in one bundle! Thank goodness...
11:10 PM

Stephanie said…
I love that you found his necklace. I love this picture and I love that blanket.
11:28 PM

Anonymous said…
How great that the treasure fell into just the right hands while it was away from it's owner. I'm relieved, and happy to see that sunshine for you!

Anonymous said…
Yeah, it's all great and all but ...
you LIED to get in.


That blanket is REALLY wonderful and Youngest looks amazing!
Paola
9:17 AM

Badger said…
Somehow I knew you would not be telling us this if it didn't end well.

And WE HAVE THE SAME HAIR COLOR NOW. Yours is growing out nicely. Mine looks like ass.
11:10 AM

Susie Sunshine said…
That right there was some good karma being returned to you.

PS. The blanket looks happy. Bring it to Chicago so it can experience some Lake Michigan sand as well!
12:08 PM

Allison said…
Yes, I am clamoring for the blanket--do I recognize it? did you have it on a table at some point?? I am fuzzy on the details (but not due to a gin and tonic, sadly.)
6:20 PM

carol said…
I am so glad you found the necklace. I hate it when things don't work out.
10:19 PM

alice c said…
It makes me feel so glad to see you relaxing on the beach - have a wonderful week.
2:48 AM

Miz S said…
Someone made that blanket for you, right? Wendy? I can't remember.

I'm glad you went back to the beach for the necklace. Because it would have been ALL YOUR FAULT if the necklace had been lost.