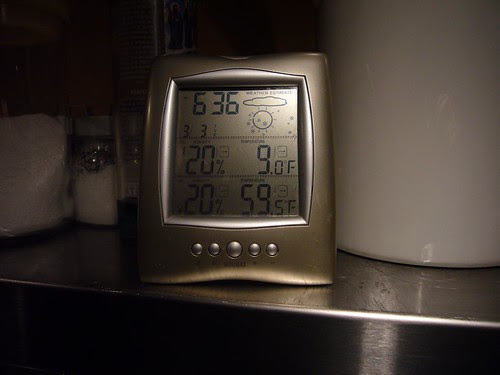 Everyone's up.
Yes, that's a nine.
59 in the kitchen doesn't make it much better. 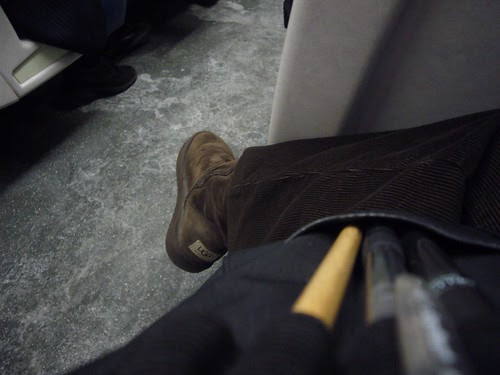 Salt. On the floor of the train. Don't drop your pashmina! Oh, you did? Well, we'll just wash it out later. (Go ahead, Australians, laugh! In MY world? 9 = Uggs.) 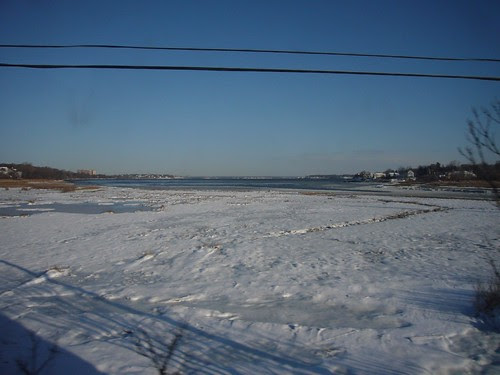 Wicked cold. But pretty.
Not a bad ride. The newspaper, the iPod. (People have been very chatty lately on the train. I don't like it. I want quiet.)
At the station, I see the same people every day.
A lady with a thick head of shiny silvery hair, talking to a young woman whose deep green coat has little felt flowers sewn on it. She wears a pink scarf and drapes the ends over her backpack and walks past a woman with a big black coat cinched tightly at the waist with a wide black patent leather belt. The man to their left used to wear one of those surgical shoes and have a cane, but he's better now. Two stops after mine, a little girl and her mom get on the train - they have the same curly hair and chat softly every day.

On the way home, things are more hurried. I still run, sometimes, to my train. I still hate the 5:12, and I've been liking the seat on the aisle. It feels less claustrophobic 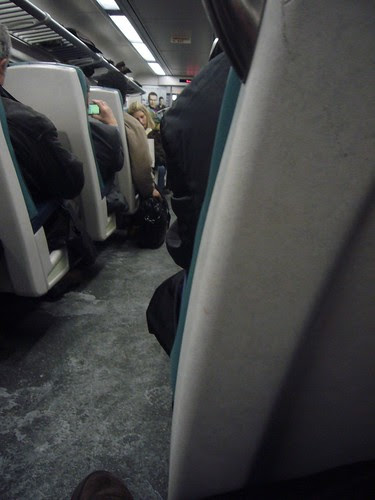 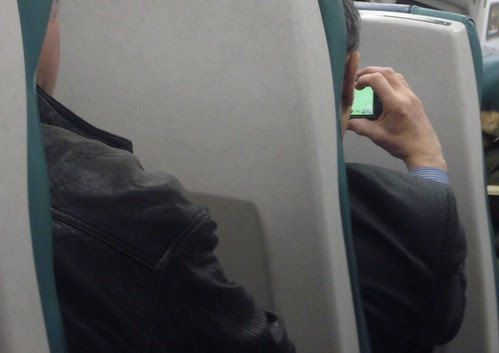 It is a little funny to see guys in suits playing video games.

I am thrilled to have been taught - by a seat-mate, how to do a logic puzzle. 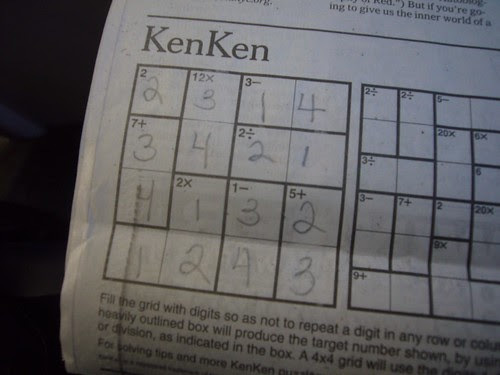 We had been riding along when he mentioned that the crossword was kind of hard for a Monday (they are increasingly harder as the week wears on) and I agreed and then teased and told him not to copy my answers. He decided to move onto the number puzzle and I told him that I COULDN'T EVEN UNDERSTAND THE INSTRUCTIONS. And, because he was not my husband or son or mother, I let him show me how to do it (it took some patience, though - I don't like to be "taught") and, without too much effort, I GOT IT. 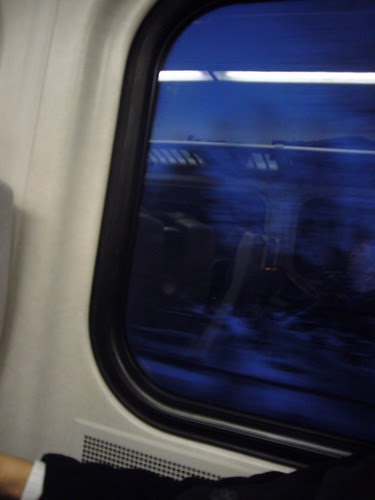 Still cold. Dark too. (Do you know that bridge joke?) 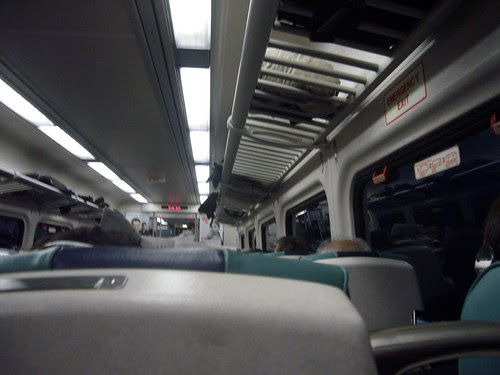 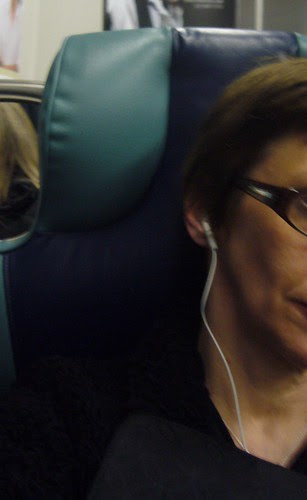 That's my "wry" face. See me being wry? See my saggy neck? Do you think I can wear a scarf or turtleneck all summer? 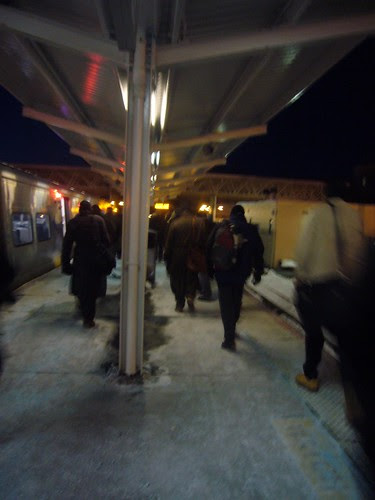 Home to the dinner rush, and chatting with the boys and clearing up and checking email and the whole other half of things.
Still cold.

RW said…
I love these posts.
I hate being cold. Hate it. I just heard that we are due for an ARCTIC - a real ARCTIC - as opposed to an unreal one - air flow - this weekend. I am not impressed.
9:27 AM

smalltownme said…
Brrrr. I feel like I was on the train with you.
10:16 AM

Anonymous said…
That DOES look cold. I feel much better now about my 15 minute drive solo in the Momvan when it's 10 below.
10:46 AM

Sarah said…
I love your commuting posts. And about the whole neck thing - let's just say that the top spot on my liposuction priority list has changed from thighs to neck. And my neck and lower face MUST be surgically lifted before I leave the house today.

Anonymous said…
Oh gawd, my horrible neck. You think you have a bad one? HAHAHAHAHA
If I weren't so horrible afreaid of needles and surgery, that woudl be my priority. TOP one.
Lovely train ride. I liek cold. That train looks brand new.
Paola
11:20 AM

Poppy Buxom said…
OMG woman! What are they putting in your coffee? People at BlogHer are going to be able to RECOGNIZE you!!!

Terese said…
This post took me back to the Winter of '93 when I lived in the USA for three months. I really loved the ice and the salt, the dark and the white snow. Then the contrast of going to work and seeing people in their inside clothes. At one point their was sun through the sky and I ran outside in Pittsburgh to hold my hand up to it - just laughing because I was so far away from home.
3:21 PM

Anonymous said…
That commuter train is way nice -- I compare it to the city bus I have to take on the rare occasion when I do not drive to work. Minneapolis city bus @ 8:30 pm = almost, but not quite, scary.
4:35 PM

Miz S said…
Your neck is not too bad, I think. I have begun to accept mine. I'm not sure what else there is to do. Well, besides surgery. Which I refuse to consider!
8:01 PM

Anonymous said…
3 Things...
1. Me thinks the women folk are going crazy! None of my male friends have ever said anything remotely close to "I think she's really pretty BUT HER NECK, OMG!!! It is so not an issue.
2. A droopy neck is kinda cool - when you give a woman with lots of loose neck a hickey, you get this really neat tye-dyed effect!
3. This is totally creepy...usually, at this time of year we Coloradoians are knee deep in snow. Today, I didn't even wear a jacket. It's been averaging 72 degrees! Mid-winter and we're having record breaking high temps. Our fire danger is extremely high, resulting in prarie fires in the surrounding areas. If this keeps up, we are so screwed come summer. We went through water rationing 2 summers ago. This is scarey! SEND SNOW OUR WAY!
9:24 PM

Mary said…
Loved this so much.

Loved the view from the train.

Loved inside the train.

Not absolutely convinced by the uggs but OK I will let you off this time...
5:25 AM

Elan Morgan said…
You won't believe what a little thrill your face was.
4:47 PM