I've had a little craving lately.
I've been wanting a shot of Scotch. Whiskey.
I taught myself to drink Scotch a very long time ago. I was working at a job that no longer suited me and had been given a bottle of the stuff for Christmas. A fellow co-worker was also dissatisfied and we decided to learn to drink it. I had had plenty of wine or beer in my day - but not whiskey.
We practiced after hours and managed to tolerate it after a couple of months.
I hadn't had Scotch since then, I don't think - though I was tempted last January in Chicago. I sat next to a woman who was having some at a cocktail party and listened while she explained that having wine meant too many refills. I saw her point.
Anyway - I had been thinking about having some Scotch while K and I were trying to figure out what to do for New Year's Eve. We checked our liquor cabinet and discovered that we had quite a variety... 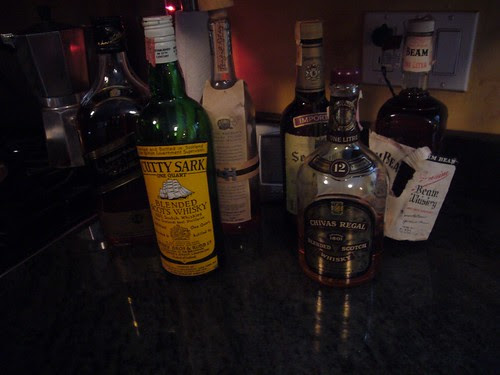 We discovered bottles of:

and two bottles of Bourbon -
Jim Beam
and Basil Hayden

The only bottles that had even been touched were the Chivas, which I'm pretty sure came from my parent's house, and the Basil Hayden, which had been given to K a long time ago. 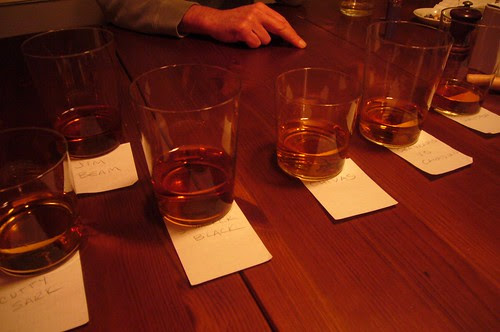 We had our friend W over and poured out a sample of each. 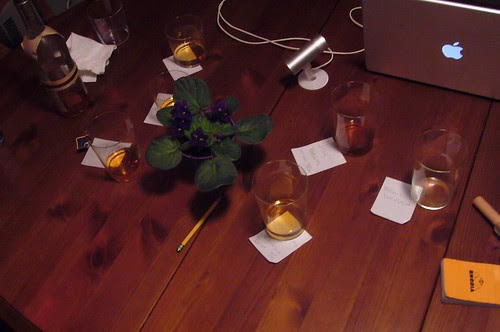 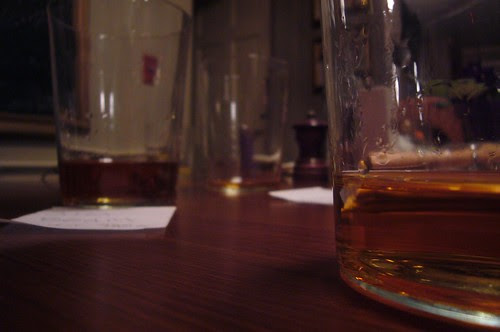 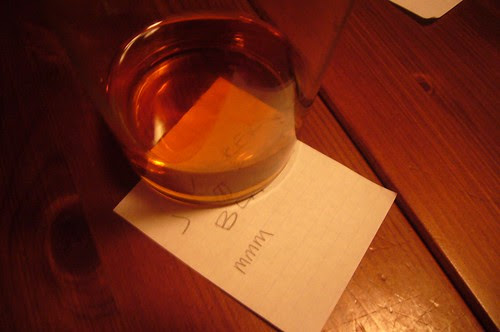 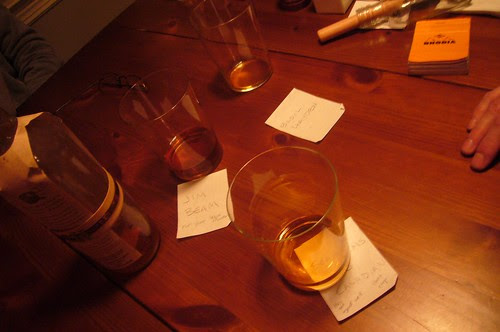 Our favorite? Johnnie Walker Black and the Basil Hayden.
The worst? Jim Beam.
But, in the end, it wasn't really about the whiskey.
It really just was about sitting quietly with a friend and savoring the time...under the snowflakes. 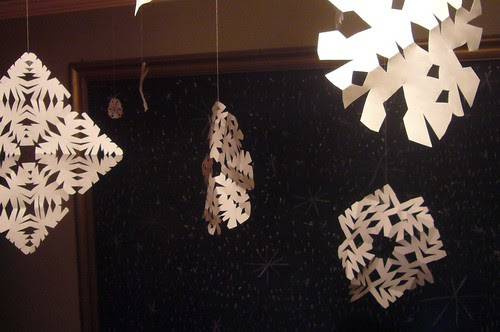 KPB said…
Well your NYE was far more interesting and inspired than ours!

You could have done it as a blind tasting - you know, numbered them a through f or whatever.

Ali said…
My father would approve - he's a Black Label guy. Hubby once went to a whisky tasting evening - they slipped in a blind taste of Brandy and no-one spotted it. Shocking.

I can identify gin by maker through smell alone - it's a good party trick!
9:58 AM

Anonymous said…
I can Identify when it's NOT Jack Daniels in my glass.

Basil Haydens is some good stuff. I went to a tasting when it was released with it's three other small batch bourbons (Knob Creek, Bookers, Bakers), Fun night.

The Basil Haydens is aged 8 years. and is actually made by Jim Beam.

Badger said…
I'm sorry, you had to LEARN to drink it? Perhaps my genetic makeup bumped me past that particular learning curve.
10:50 AM

Jen said…
Cool idea. By the way, as a Scot, Scotch is always whisky never whiskey.
11:35 AM

Poppy Buxom said…
I think I received the taste for bourbon along with my mother's milk. Which wouldn't have been hard, since for all I know, she drank whiskey sours while breast-feeding.

Hey, it was the fifties, OK?

On the other hand, I have never been able to abide scotch. Although That Stud Muffin I Married drinks Johnny Walker Black. Or single malt, when he's feeling flush.
11:46 AM

Anonymous said…
I had to learn to love it, too. It took a long time. My cocktail of choice is a Rusty Nail. And though it's 10:47 am, I suddenly want one.

Grumpy but sweet said…
if you have a chance... my two favorite scotches are Aberlour and Oban. Yumyumyum.
2:33 PM

Amy A. said…
Everything is nicer with friends.
4:15 PM

Maggie May said…
what an awesome evening
and yum
4:35 PM

Anonymous said…
Oh mah holy hell. I only thought I wanted to come spend an evening with you before. Now I KNOW I want to.
7:17 PM

Fannie said…
The very thought of Jim Beam made me grimace - the absolute worst.
8:22 PM

Mary said…
Scotch with ice and water used to be my drink of choice. Back when I was without any real cares!

Sömsmånen said…
I too learned to drink whisky but never really got to like it - but never admitted, of course... It looks really competent and cool though, sitting by the fire with a scotch in hand. I remember pretending that Famous Grouse was my favourite, how silly can one get??
5:44 AM

The Coffee Lady said…
are all those glasses for me?
10:01 AM

Anonymous said…
I love that you had so many bottles in your liquor cupboard.

My husband is all about the single malts. I'll stick with my faves of sparkling wine or pinot grigio, and bring on the refills!