It has suddenly gotten cold, here in Tuvalu. 18 degrees cold.
One of you told me that thin people feel the cold more intensely. I'm kind of thin right now and I can tell you that I do feel the cold more. And though I do have lots of layers to pile on, I found myself with an outerwear dilemma. When I was home, for a living, I hated climbing in and out of my car in bulky jackets and was quite happy wearing what most people would consider a spring or fall coat. It's long-ish and sort of an A-line and black, of course. It's wool, but not lined, so not especially warm. I have a fancy coat too - 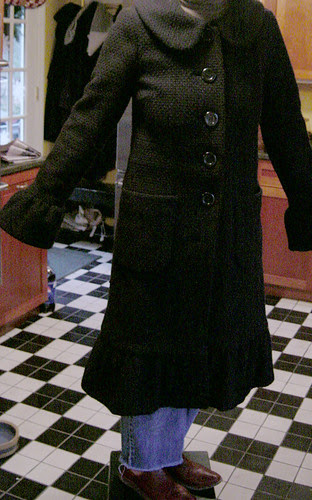 blogged here. (Hmm, it's four years old!) But I learned very quickly that my fancy coat is warm but TERRIBLE for commuting. It's too heavy and long, whoever sits next to me on the train sits on part of it and those gorgeous sleeves? Make it impossible to swipe my subway card at the turnstile or read the newspaper or search for something in my bag. I know. WOE IS ME. Two coats. Fear not, judge not - we give coats and food and ALL KINDS OF GOOD THINGS TO PEOPLE WHO NEED THEM ALL THE TIME.
Where was I?
Oh, yes, the coat dilemma. THE PUFFY COAT DILEMMA.
So, I realized, in my commuting/thin/cold life, that I probably needed a coat. As the weather got colder I fine tuned my observational skills and realized that just about EVERYONE had a puffy coat.
Now, I've never been a big fan of the PUFFY COAT. In fact, I've sort of looked down on the puffy coat. But, the more I saw women wearing them, the more I considered the puffy coat and I came to decide that, aside from their incredibly stylish looks (NOT) they might just be WARM. I spent a couple of days noting the features of the puffy coat and making mental notes about the puffy coat and, of course, doing some internet research on the puffy coat.
Finally, after a particularly frigid morning commute, I set forth to find a puffy coat.

I wanted to try this one on.
SOLD OUT.
(But on sale in a couple of sizes - so give it a shot.)

Kenneth Cole. IRL? UGLY. Also, the belt is not a good idea unless you are six feet tall and weigh 100 pounds.

How about Old Navy?

I was feeling pessimistic. I started to head back to the office. All around me (freezing in my unlined coat) women were looking cozy in their puffy coats, toasty even. REALLY, they were everywhere. Suddenly, I looked to my right and saw a woman in what I deemed to be THE PERFECT PUFFY COAT. It was long, but not bulky, it was black but not shiny, it had a removable hood, no pockets or logos (I can't wear North Face) and it had two small belts to pull it in at the waistline. I was walking next to her and startled her by asking where she got it. She had a very slightly smug look on her face when she said: Searle.
Damn, I thought, that's the end of THAT. Searle, for those of you not familiar, has very distinctive, understated, beautiful outerwear. It also has very distinctive pricing - I don't think there is much of anything in their coat department for less than $500, which is just slightly out of my range. (Yeah. SLIGHTLY.)
I thanked her and continued on, but I was pretty sure that the dream of the puffy coat had now died. I suspected I'd never find anything as nice as the Searle puffy coat.

At the last moment (I had used up my lunchtime)I decided to run into Filene's. You know Filene's - it's the same as Daffy's and TJ Maxx and Lohmann's. What do you call those stores? I don't know. I ran in there.
There was a sea of puffy coats. Racks and racks of puffy coats. Cheap puffy coats.
I tried on half a dozen. None of them thrilled me.
I was about to leave when I walked past it.
The only one.
On a rack of really horrible Tahari puffy coats (who knew?).
The exact, very same, identical Searle puffy coat.
In my size.
And on sale.

Need I say more?
Labels: I'd marry it but I'm married

Duyvken said…
You don't need to say another word but you do need to post a picture! I like that J Crew one best.
6:41 AM

Badger said…
That's probably where Smuggy McSmuggerson got hers, too.

Anonymous said…
Ya you, the huntress is victorious! Picture please.

Marsha from Massachusetts
7:59 AM

Anonymous said…
What a happy ending! I do hope you keep the wool coat with the lovely sleeves though--puffy is for commuting. Lovely wool is for, well, you HAVE to keep that coat.
8:06 AM

Eliane said…
Whatever you do with your puffy coat, don't cut it up.
8:24 AM

Dani said…
I was going to suggest the black Land's End knee-length one that I have (removable hood, no logo, not shiny) but hell.... Take that Searle and run with it, babe! :)

FYI - Puffy coats melt instantly with the tiniest exposure to a hot ash. I unfortunately know this from experience.
9:20 AM

Anonymous said…
My aunt is a Filene's fan. She took me there on my last visit 2 years ago. Good for you!
Paola
9:32 AM

Little Miss Sunshine State said…
I got all the way to the end and said "Whaaaaa! No picture!?"
9:48 AM

That One said…
I just love it when the stars align and the exact perfect *thing* is found. (Where *thing* = anything you've been searching for!)

Anonymous said…
I sympathize with the big coat/small person dilemma. I had an enormous warm puffy coat I could never wear because I can barely walk in it, let alone drive. Then I found one made by Hilary Radley (I think it came from Garnet Hill) that manages to be puffy yet slim.
10:47 AM

smalltownme said…
The general consensus here is that we need a picture of the ultimate coat.
10:48 AM

barbra said…
A life-affirming story of kismet! Thanks, bb!

I'm guessing "I can't wear North Face" has something to do with your brother.
11:13 AM

p.s. I think that the reason why you haven't posted a picture is because it has a fur hood. No?
11:13 AM

Anonymous said…
And you'll be posting a photo of this perfect puffy coat, yes?
12:27 PM

Wendy said…
I love it when I'm one with the shopping universe! I finally found a hat that doesn't leave dents in my hair, so I'm feeling all smug about that.
1:04 PM

You are now Jigglypuff.

Together, we will rule the Pokemon Kingdom.
1:22 PM

Anonymous said…
Badger: I was thinking that that lady is Smuggy McSmuggerson too! Only smuggy people say Searle, when they really should say, "OMG, it's a Searle that I found for a HUGE discount at Filene's!" Non-McSmuggers enjoy sharing their shopping triumphs....just like our little bb.

Anonymous said…
You wouldn't believe it but I had the SAME exact story as you. Ugly, puffy coat debaucle and then saved by a lone white Tahari gem from TJ Maxx. I have never heard of another in the universe. I am glad it was you who got one!
2:09 PM

Mary said…
Now there is a joyous moment...

MsCellania said…
Now you can be snug n smug, too.
Karma would be sidling up next to that lady, should you see her again, and Stage Whispering "YO! Filene's! $89! SCORE!" and walking off.
Yeah - who knew Tahari made ugly puffy stuff?
3:40 PM

Jan said…
This post couldn't be more timely! I, like you, had looked down on the puffy coat. However, in my new artic-like location, I started to reconsider it. I just promised myself that when I finished some holiday-related must-dos this week, I was going to head out to check out the puffy coat scene. Now I have a primer to print out for reference. Thanks, BB!
4:02 PM

Stephanie said…
oh yeah...she totally got her coat there, too.

I'm so glad you found it! can we see?

also...so glad you got some wonderful time with your dear friend. xo
4:36 PM

Emily said…
it was a serendipitous shopping moment. my favorite. :)

i went coat-shopping this year as well, but have not considered a puffy coat before now. thinking...
6:53 PM

Miz S said…
You are such a good shopper! You totally deserve that coat.
7:33 PM

Anonymous said…
now, as someone who tells people how to dress to stay warm, both for a living, and for safety sake. the mistake most people make, is the base layer.

it's really all about the base layer. And in most cases, Patagonia capilene 3 can fix anything, and fit under most outfits. I wear it everywhere.

Anonymous said…
Three cheers for the score! I've been mulling those coats over, too. I may have to investigate brother b's suggestion first. I'll look forward to a picture in the morning (she said cheekily).

Allison said…
I too am facing a coat dilemna, back on the East Coast after five years in the desert! Can you ship me the very first wool coat, as I don't have to swipe a subway card? Pretty please? Okay, but wait, I think it looks pretty slim--I would need one a teensey weensey bit bigger. :-)
7:49 AM

Anonymous said…
Clearly, the Coat Goddesses were looking out for you. Yay!
10:17 PM

Anonymous said…
This comment has been removed by a blog administrator.
9:07 AM