notes from the trenches

Lots of days slip by at work. Sometimes, by the time I get home, I have a good story to tell at dinner, but most of the time things are unremarkable...which is good.

Today I have a good story.

A few years ago, before I worked there, my boss bought each member of the "management team" a special pen. I don't know the circumstances surrounding the purchase of these pens but I have seen each member of the team with the pens and I know my boss has one too. His is blue and, if he misplaces it, he gets a little worried.
Last week was kind of rough on the "management team," IMO.
They were doing lots of year end stuff and there were many meetings and things seemed sort of stressed and even a little emotional around the office.
Anyway, just after one particular fellow met with my boss, seconds later in fact, he sent me an email asking if I had seen his special yellow pen.
I went into the conference room and gave it a cursory glance as there was another meeting scheduled in minutes - no pen.
I wrote back to him and he replied instantly saying that he was getting a little frantic.
I promised him I'd keep an eye out for it....
Later that day an email went out to all employees in search of the treasured pen.
I didn't hear about it again until the next day when the guy mentioned that nothing he was writing was any good without his yellow pen.
I started to feel a little sorry for him. After all, I often assign special value to inanimate objects.

The next morning, early, he sent out another email to the staff. His pen had been found!
I emailed him right away to tell him I was relieved.
I said: if you look out your window right now, you will see me, across the air shaft, in my office, smiling very hard.
I hit send and swivelled my chair around.
And there he was waving his special pen, smiling. 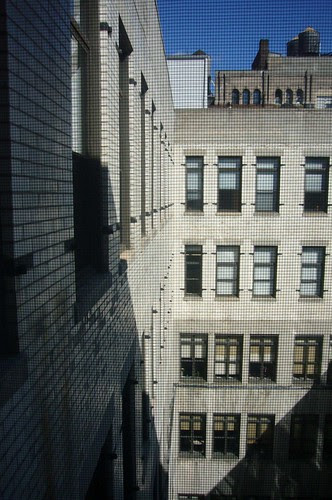 It changed my whole day.
Labels: life is a series of thousands of tiny miracles

Little Miss Sunshine State said…
I love tiny miracles.
And the way you describe them.
8:00 AM

Anonymous said…
I love it! I love that he admitted in public how attached he was to that pen and how important it was to him. I love your reply to look across the air shaft. I love that you smiled HARD and he waved his found pen.

Anonymous said…
I like happy endings the best.
12:14 PM

Eleanor said…
Well...if you look out YOUR window right now, you will see me, across the ocean, in my study, smiling very hard.
3:47 PM

Duyvken said…
Ditto what Eleanor said. That is just adorable, BB. Give that man a hug from me!
5:22 PM

alice c said…
I KNEW that it would only be a matter of time before you worked your magic and they all fell in love with you.
5:56 PM

Jan said…
Despite the stresses of being out in the workplace again, I can tell that you're making the most of it.
*Smiling very hard* in Chicago, despite the deep freeze.
6:56 PM

Anonymous said…
What a wonderful, wonderful story. I'm so glad he found it.

Saoirse said…
Man! With everything going on in your life, family and new job, for you to take seriously his angst at missing his special yellow pen, is BEYOND admirable. I, too, have been beset by life's ups and mostly downs lately and your example of magnanimity is inspiring to me. Thank you!!!
10:24 PM

Major Bedhead said…
For some reason, this post came up twice in my feed reader. And both times it made me smile. A lot. Which, y'know, is kind of nice.
11:22 PM