Let's see...
it all started way-back-when (doesn't that look funny?). I was making garlands for the office party from those page proofs. Remember? 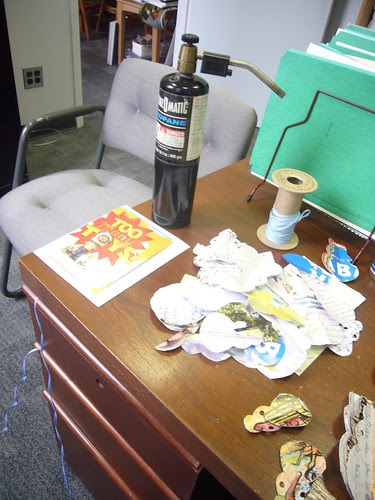 They didn't end up looking like snowmen, but they were festive... 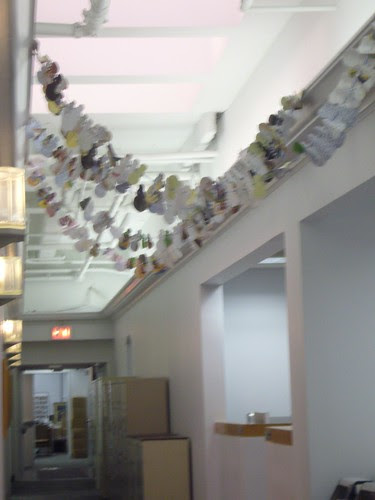 The office party was a hit...the space looked pretty and the food was good and we had made the decision to cut the budget in half and make a sizable donation to a food pantry organization with the other half. One of the party volunteers came up with the idea of not ordering dessert from the caterer and asking employees to bring in sweets. Someone else took the idea a step further and suggested a dessert contest. There were 22 entries! There was more dessert than food. It was a great success and everyone had a very good time speculating on the winners and sampling the goods. 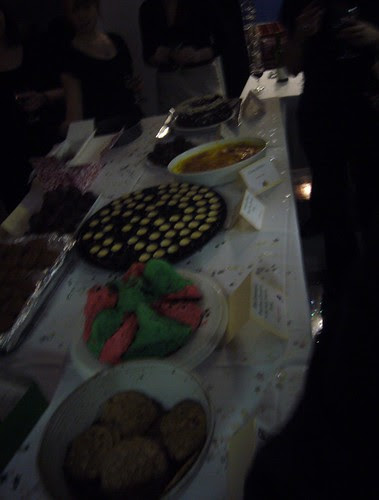 There were dozens of cookies, a choctopus cake, many many brownies, chocolate cups with eggnog mousse, my brulee and lots of other great things. The winner was a root beer bundt cake, second place was Old Fashioned Mid-Western Chocolate Covered Peanut Butter Balls - brownies took third. 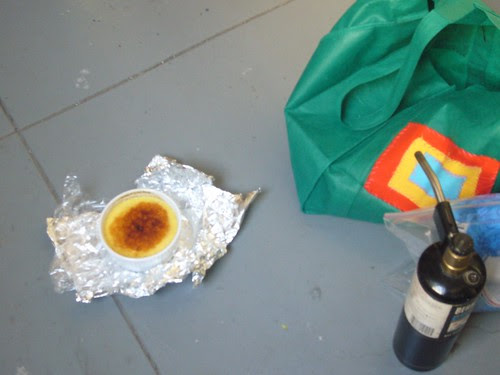 (a small brulee for the judges)

I had torched my brulee on a secret terrace....

Fast forward to Christmas Eve and church. Something was not quite right with us at church on Christmas Eve. Nervous energy? The giggles? Middle and I were sitting next to each other and he had to be coerced to attend. A couple of minor mis-steps in the service and I was in tears in an attempt not to laugh at Middle's running commentary. It was, unfortunately, topped off with a Homily that began with three families in a bar that left us paralyzed with stifled laughter. If that weren't enough, the emotion-filled rendition of Silent Night that we traditionally close with was overshadowed by a group in the balcony doing an American Idol version of the classic, complete with overly dramatic gestures and Mariah Carey vocalizations. Suffice to say, we were very happy when it was over. 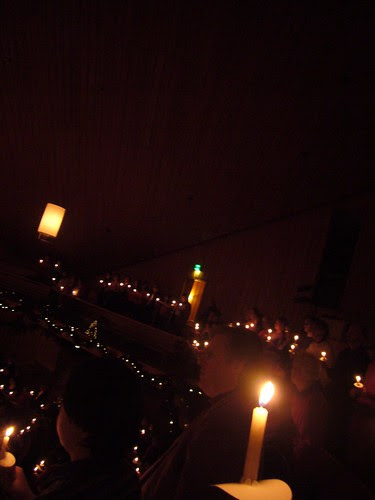 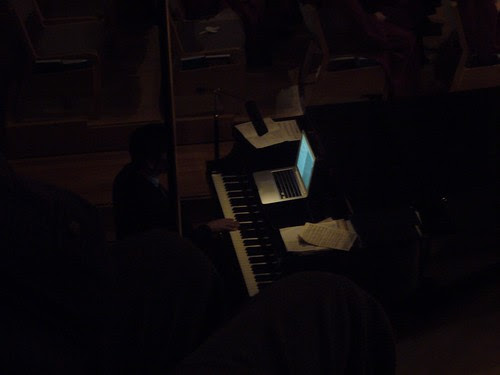 We were greatly impressed with the use of a laptop for some of the pianist's sheet music - the pages turned themselves on his screen!

I had the boys wrap each others presents, which saved me lots of work and got them into the spirit of things nicely, but we ran out of paper. 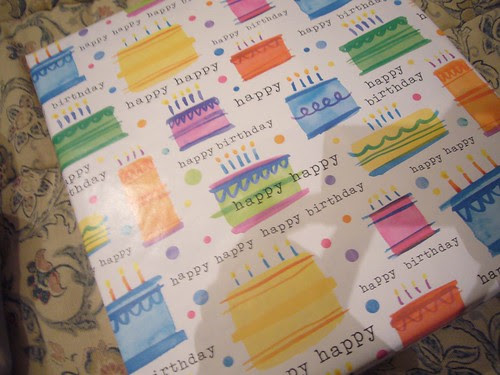 We dove for our beds near 10:00 and the boys got up just before six.
The giftage was well appreciated... 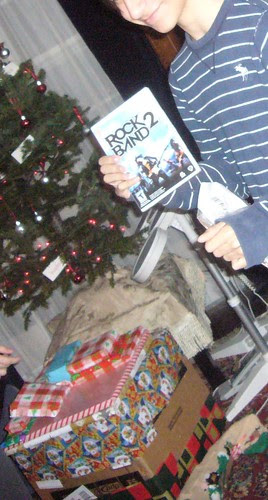 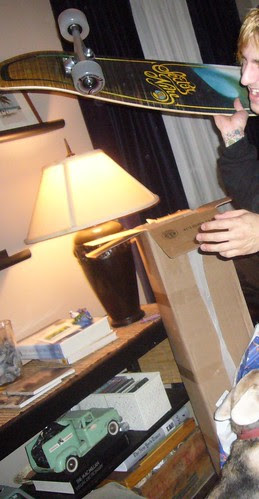 Middle received a floor tom for his drum set, a set of moustaches... 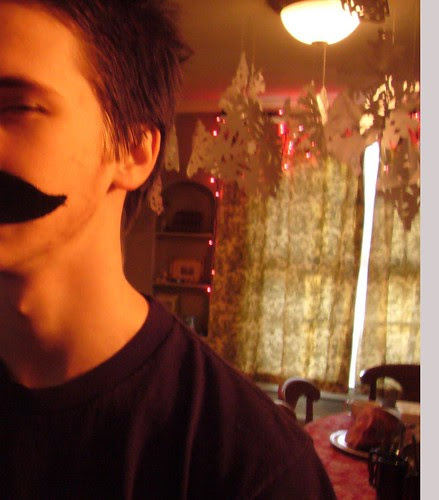 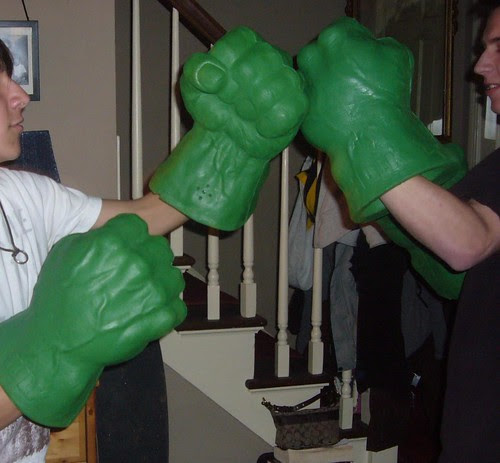 EVERYTHING IS BETTER WITH HULK HANDS.
Eating, drinking, scratching your head...dancing, singing, waving, doing laundry! All much more fabulous with HULK HANDS. Adding a moustache makes for stunning photo ops. 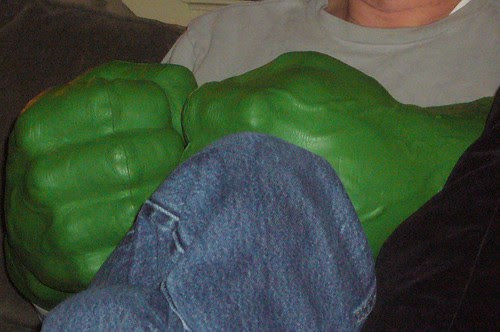 But, you know, Christmas is a long long day. And, after the relatives go home, and you've eaten many cookies and waffles and filled up on fruit, you might want to take a little nap on the couch.... 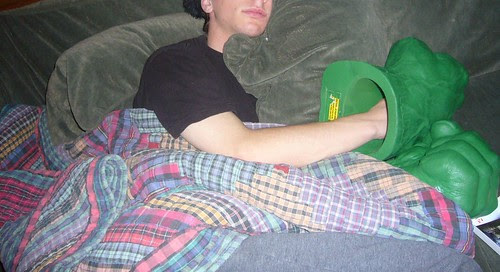 Christmas has come and gone.
We don't really do New Year's but we'll be glad to ring out 2008.

I'm sitting here, under the snowflakes in my dining room. Everyone is snuggled in their beds and the weather is gloomy.
I expect today will be full of drums, more cookies and a film shoot or two.
Which is just as it should be.
Labels: amen

Anonymous said…
I love all the photos. It sounds like a wonderful few days.
10:01 AM

MsCellania said…
Even thinking about Midnight Mass makes me laugh. It appears this is universal, whether it happens at midnight or earlier.
HAPPY NEW YEAR!
in case I forget to say it later. I think we are all happy to give 2008 a kick in the arse on the way out the door; 2009 WILL be better!
10:14 AM

Badger said…
BUCKEYE BALLS. That is what those chocolate-covered peanut butter thingies are called. Say it loud and proud, yo.
11:49 AM

Wishing you a good day.

Wait a second, there was no mention of cheese! Do you'all not eat cheese at Christmas?
12:03 PM

tut-tut said…
Have a pleasant and restful weekend. You've got enough in those Hulk hands!
12:11 PM

smalltownme said…
That blowtorch scared me until I got to the creme brulee.

alice c said…
I am struggling with the concept of Root Beer Bundt cake but I am sure that it was delicious.

The rest of the time looks like a great Christmas. The sort that lingers in the memory for happy reasons.
2:41 PM

Anonymous said…
They are such GUYS. I love it. I hope it's a lovely, restful weekend for all.

Anonymous said…
When I was a teenager, a friend and I got the worst case of the giggles, at, get this, our other friend's grandmother's funeral. Oh, I don't think I've ever bit into the inside of my cheek so hard since. Those stiffled giggles can hurt.

You mean I'm the first to request further details about the choctopus cake? This can't be.

People, where is your intellectual curiosity?
11:51 PM

Anonymous said…
Well, it certainly appears that you had a wonderful... birthday?
5:45 AM

Anonymous said…
No prize for you?
CANNOT be.
Go there and USE those Hulk hands.
Paola
7:40 AM

Anonymous said…
Ah, these pictures made me smile--esp. the hulk hands.
6:59 PM