the great apple debacle of 08

I told the boys it wouldn't take the whole day.
I explained that this apple orchard isn't nearly as far away as our usual orchard.
A shorter drive, I boasted, near the ocean, I offered - and they agreed to join us for what I hoped would be a fun afternoon.
And we did have fun.
We laughed and laughed...but it was really kind of miserable.
We hit a ton of traffic - 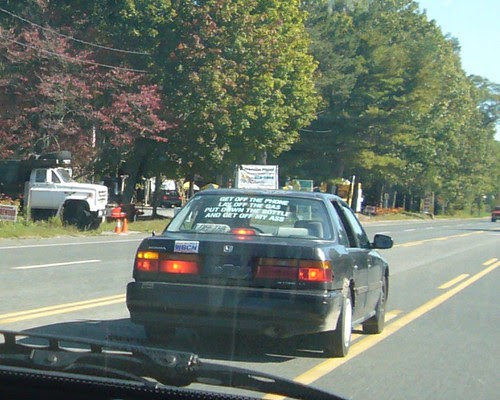 can you read that? It says: Get off the phone, lay off the gas, put down the bottle, and get off my ass. Friendly!
AND we got lost a few times - my nav system was asleep at the wheel! 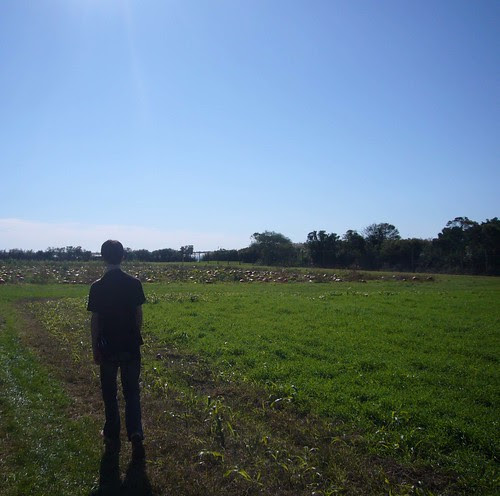 We finally arrived at the orchard (it was pretty crowded) and discovered that there weren't really any apples. 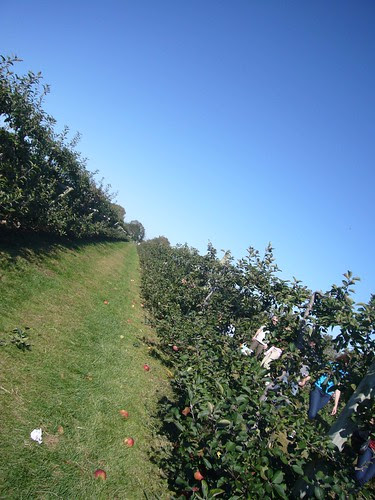 It was pretty funny, except for the fact that I felt like crying...dragging them all that way.
There were rows of trees roped off with signs that said the apples weren't ripe yet. 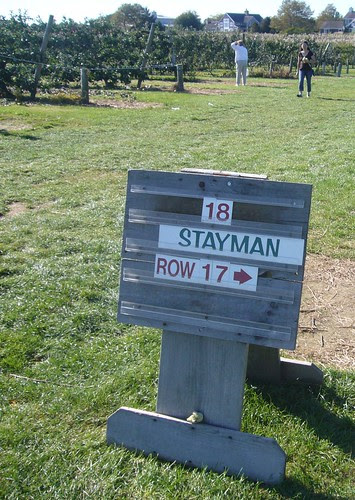 See this? IT'S A LIE. THERE WERE NO APPLES IN ROW 17.
VERY FRUSTRATING.
Anyway, being a horrible parent and all, I convinced Middle to cross the rope and smuggle out apples which ended up being completely hilarious as we discovered, after we tasted one of them, that they had been sprayed, we think, with SOMETHING. 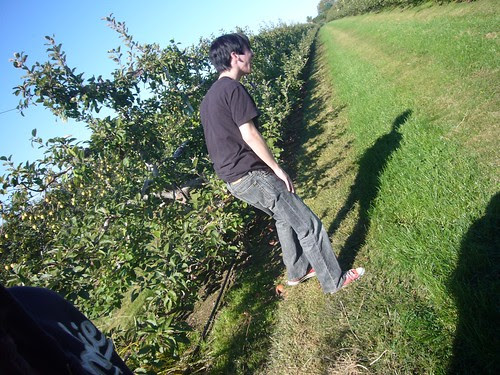 I'm not going to SAY what they may have been sprayed with but I will tell you that it rhymes with SPANURE. See him laughing? See him spitting his contraband apple out? 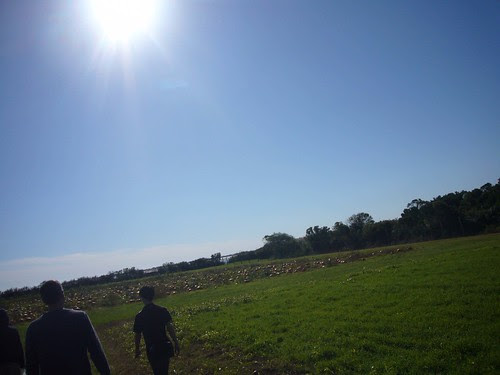 It was terribly scenic.
And terrifically expensive - but we had an awfully good time and were reduced, at several times, to tears of laughter. 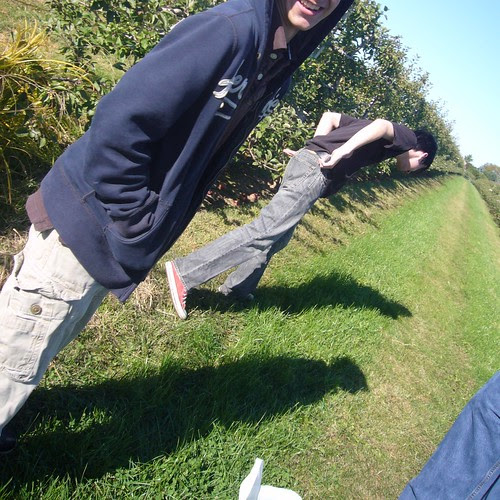 It was nice spending time out of the house with some boys... 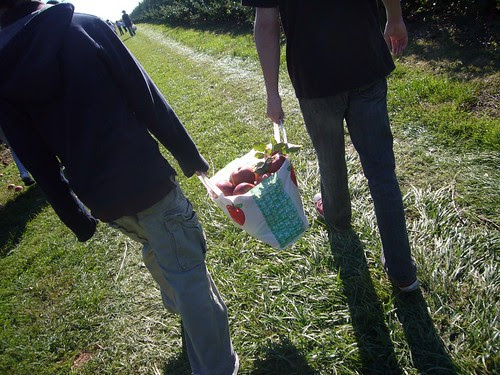 I had promised them dinner at a diner after apple picking and after getting lost three times we finally found it. 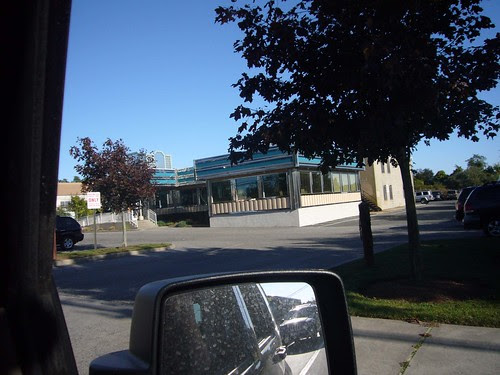 Hilarity pretty much ruled the evening at the diner too, I'm afraid. Some of the help was having an altercation, of sorts, when we arrived and our waiter was somewhat surly.
We were starving and ordered burgers and fries and beer. We laughed some more and did some people watching. (There was a woman at the counter in a sequined dress. At 5pm.) And, by the time we got back in the car, were exhausted.
We spent the ride home listening to my iPod playlist - an interesting thing to do with a couple of teens, and driving into the sunset. 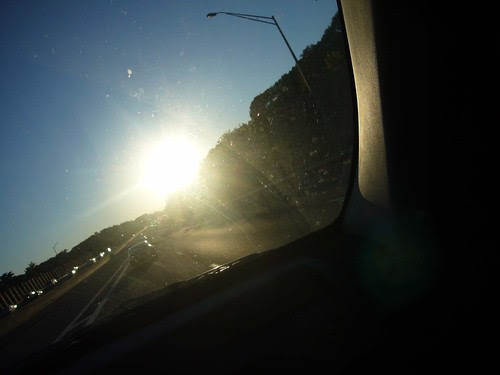 The boys did their best to convince me that I didn't waste their Saturday and now I'm going to do my best to make it up to them by making lots of delicious apple things.
Labels: we've already had apple crisp

Duyvken said…
LOL, That looks like fun. I must take my camera along when the kids and I go walking in the afternoons. By the time I've loaded up the double stroller with all the basics for an hour long outing I just don't have the will to carry the camera along too. It's good to know that when they're teens I should have my camera mojo back.
6:38 AM

Anonymous said…
Is that young man in a hoodie Youngest? If it's indeed him, what have you been feeding him? He grew overnight!
I empathize with them for being so supportive.
If you want to know, there are currently 83°F here. When is fall arriving???
Paola
7:16 AM

Anonymous said…
Shut the front door, what time were you there? We were there at about 12, and we picked 60 pounds of APPLEs, because we love APPLEs right now.

There were plenty o' APPLEs when we got there.
7:29 AM

Little Miss Sunshine State said…
That was hysterical. Did you figure in the cost of gas in the price of the apples?

Is Middle ALWAYS your partner in crime?
10:32 AM

jordi said…
It was NOT a lost day.. when they are all above 25 it will start to appear as "lore". "Remember the time that mom made us eat apples sprayed with ....." Remember the time Mom dragged us all the way to that apple orchard where there were no apples???" the story will grow and grow and eventually your GRANDCHILDREN (Heaven forfend for a while) will be telling it. Keep the pictures so you have some defense!
11:49 AM

MsCellania said…
Yes, this is The Stuff of Legends!
12:36 PM

Anonymous said…
That's so weird that the apples weren't ready yet! I always go picking in September here--and I thought our seasons were behind you coastal folks. Still, a pretty day.
12:44 PM

The sequined dress was just GRAVY.

Also? I know I've said this before, but your boys have gorgeous smiles.
4:56 PM

Anonymous said…
It sounds like a really great day! Lucky you - I can just hear my boys if I asked them to go to an orchard with me: "What, are you kidding me? An ORCHARD?" I'm jealous...
7:55 PM

Alice said…
What a lovely day!

Make a crisp and post the recipe. Made one today, a bit disappointing. I must know how you do what you do!
9:11 PM

Anonymous said…
These days make the very best stories. For many years to come your children will begin stories with "Remember that time that you ate a 'spanure' covered apple..." then they will roll around the floor laughing.

I love that, like every good parent, you took the time to photograph and document that moment too. Fabulous!
2:45 AM

Anonymous said…
So funny about there being "no apples". We went to a local orchard to get about 200 (!!) apples for centerpieces for my bro's wedding a couple of weekends ago. We were met with a sign that said something like this "We lost 80% of apple crop due to spring frost and hail. There will be no apple picking." Crap. Plan B. Buy out ALL the apples at the local grocery store.
11:20 AM

Annagrace said…
Love this. And I just made another yummy apple cake with orange peel...gonna go have some
6:22 PM

That photo you sent me - I was certain that was youngest and the one closest in frame was middle - so there you go, I had them around the wrong way. Something I am sure would impress them no end.