As we've settled into our daily schedule (soon to be up-heaved by my work schedule) and the school year has resumed, I seem to have more quality time with Middle and Youngest. True, we were home together all summer and we did enjoy each others company, but now that they are gone for most of the day we find ourselves more likely to watch television together and our dinner conversations are more interesting.
And what, you may wonder, are the bird boys talking about?

The Large Hadron Collider
Middle was especially interested in this and very well informed. I think it's being discussed in some of his classes and he has done some research on his own. We are, I'll admit, having an awfully good time referring to it as the Large HaRdon Collider, because we are Very Mature.
Middle is also still Lactose Intolerant which I LOVE referring to as Lacoste Intolerant. We ARE a laugh riot over here. The collider has provided us with many long conversations, diagrams (including a perfect free-hand circle on the big board) and doomsday predictions. 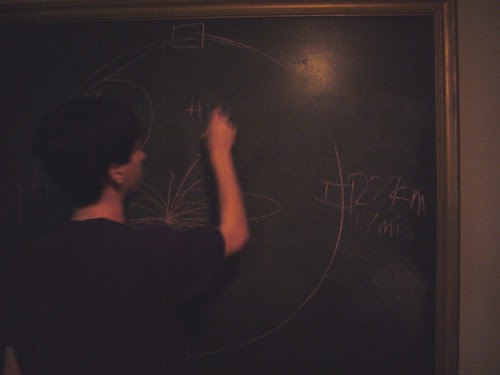 The Fringe, season one? or two?
We watched the first episode of this JJ Abrams project and felt bereft after it. Like Lost, it employs many of the same plot twists, touches of apprehensive music and gore, and far too many mysteries (which are never solved) for us to get too involved in this show. We had a good time making fun of it though and, somehow, it provided us with many occasions for using finger quotes. We crack ourselves up with the "finger quotes."


Building the Golden Gate Bridge with slide rulers, bunson burners and scales
I don't remember what started this conversation. It could have been Middle's Physics class which is not the kind of physics class we remember from high school but sort of a hands-on, how-physics-effects-our-daily-lives class which he's having a lot of fun in. Anyway, somehow we got on the topic of the way men used to build things and Middle and I were reduced to tears at the thought of using scales with rocks on one side and sticks on the other side to build the Golden Gate Bridge and I am cracking up here, at six in the morning, just thinking about how funny we thought that was - so you'll just have to take my word for it.

How many diamonds are used to make diamond dust drill blades?
I'm sure this was discussed whilst watching How It's Made. Do they throw out the old blades? Isn't it terribly expensive? Are they conflict free diamonds? There are only so many diamonds in the world, you know. Couldn't they use lasers? Can you buy those blades at Home Depot?
And why don't they just use boron nitrate instead?

You will, undoubtedly, be relieved when I am able to write about the people I see on the train each day.
Labels: bunson burners

Anonymous said…
Husband, the engineer who worked in diamond cutting for a time says you would never use boron nitrate you mean boron nitride (a ceramic), perhaps you meant titanium nitride?
They likely make most diamond dust in the manufactured diamond process. he said you can buy little packets of diamond dust rather inexpensively in different grit strengths.
7:13 AM

Badger said…
I was underwhelmed by that Fringe show, too. In fact, I think one episode was enough for me.

But since we're all going to get sucked into a black hole courtesy of the Hardon Collider, I guess it doesn't really matter.
7:36 AM

Stomper Girl said…
I had a good snigger at the Hardon Collider too, I've got terrible imagery to do with swordfighting crowding my (mature) brain right now.

Poppy Buxom said…
My husband adores physics. I adore immature jokes. Naturally, I'm going to ask my husband if he wants to build a "hardon collider."

I'm also guessing that new Band music is being practiced in your house.

Can I just come and sit quietly in a corner of your house and listen to the conversations?
9:16 AM

MsCellania said…
Oh, I am "grabbing" Hardon Collider as the new name for my rock band.
Whoa, that sounded nasty. Better use the finger quotes... ah, there; much better.
Well, I've already had my physics and chemistry lesson for the day. Thank you.
11:14 AM

I've already told you about whey and how it's concentrated lactose and hidden in unlikely places, yes?

Lactaid milk (lactose free) has a later expiration date than normal milk. Is lactose the thing in milk that causes it to go bad? Also, if you're not used to it, lactaid milk tastes funny.

barbra said…
I love it when you have a post like this one. When I finish reading, I find I've been smiling contentedly through the whole thing.
1:23 PM

Mary said…
The Fringe has been "fastracked" from America - and now I know not to watch it!!

I'll be too busy thinking about the Hardon Collider anyway.
5:19 PM

Anonymous said…
This was a great post. Such smart, smart boys.

I often find it hard to believe that JJ Abrams was the brains behind "Felicity." Plus, I didn't want to watch "Fringe" anyway, mostly because it seems to star that guy who used to be on Dawson's Creek who "makes my neck itch" (which is an expression, used in finger quotes, that I have picked up here). Not that I ever watched Dawson's Creek, mind you.

(Also, just so you know, there is a guy who rides my bus to work who is a dead ringer for Napoleon Dynomite. If this guy had big moon boots on, I'd have to ask for his autograph or something, because the resemblence is absolutely uncanny. I want to take his picture with my cell phone without him or anyone else on the bus knowing, so that I can prove this strange phenomenon, but I don't think I can get away with it without being taken for a stalker, or at least, for someone very rude. So I KNOW you'll have fun surreptitiously blogging away about your fellow commuters, and I very much look forward to reading all about it.)

Duyvken said…
So, that's what likes ahead of me when the kids are older and grow out of talking about things that are yellow, things that smell and things that we find in the backyard. I know they'd love that book friction experiment - might have to give that a go!
7:34 AM

littlemissme said…
Well, I'm on my own with liking Fringe, I guess, but definitely have been "finger quoting" the little gem he utters when he shoots Dunham up with LSD-- "This'll rip open your consciousness..."

Have said it at least a dozen time. Appropriate for any situation. Try it, you'll like it!
12:35 AM