project of the day

While K rides out a first refusal* and waits for work he likes to be busy all the time.
Last week he planted some vegetables, built a new side walk, cut the grass, and did a lot of cooking.
Middle had a spotty schedule last week and had found instructions on line for building a dolly track. He was good enough to go through the motions of attempting this construction on his own but it was only a short while before K got involved.

This is the kind of thing I do when I have down time - this is theirs:

Sometimes I have to check in on the celebrities. Sometimes they have to use the miter box.

They spent a couple of hours going to the hardware store, assembling materials from the garage and drilling pilot holes. Middle was especially fun to watch as he fit all the poles together and did some pole dancing, some pole fighting and some pole vaulting with the poles...

This was my view for much of the construction - 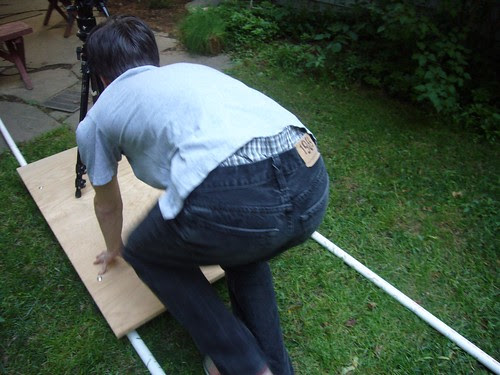 and, in the end, they had produced a very serviceable, smooth rolling dolly - 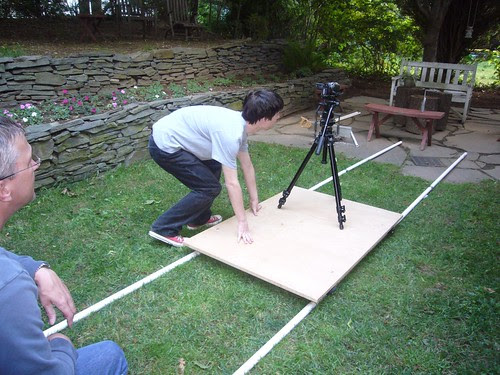 or dolly TRACKS - or something. 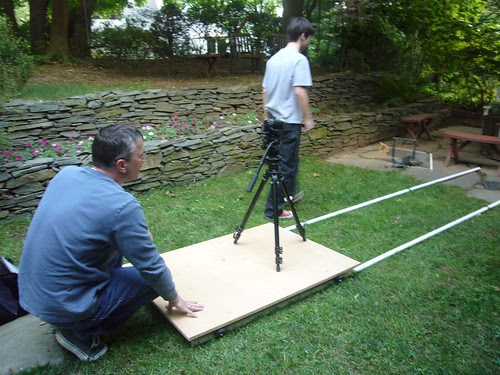 And, so, Middle can track and scan, or scan and zoom. Or something. 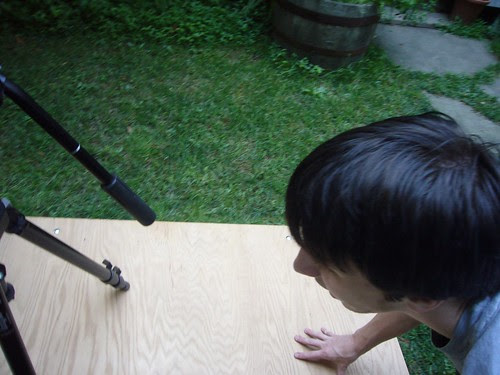 He's very pleased with it and is now shooting a film in which the music at our house becomes so loud that our home actually explodes.
Or something.

*First refusal: someone wants K for a project but isn't sure when it will begin. They "hold" his time and he cannot take another project without checking with them.
Labels: but K really needs to return to work this week

Anonymous said…
Your family always has the most interesting projects.

And I have a little lust in my heart for your stone retaining walls.
11:55 AM

Miz S said…
I love projects. Especially when I can just WATCH.

I believe that Middle will be famous someday. At the very least he will be doing something he loves to do, which is better than being famous.
1:10 PM

alice c said…
Does Middle KNOW how lucky he is to have a father who can help him build a Dolly Track?
1:22 PM

Anonymous said…
Ah, the joys and blessings of having a father who does NOT work a 9-to-5 job somewhere else and who likes to do projects. I had no idea what a dolly track was until I saw the photo, and then I thought, Of course Middle wants one of those. Who wouldn't?
1:52 PM

KPB said…
And here I was thinking a dolly was well, a dolly.


I am LOVING those stone retaining walls.
5:35 PM

Pam said…
Gosh, I really like the idea of that first refusal thing. I wish my work would take up this splendid idea. I would be perfectly prepared for my time to be "held". Sounds restful.

Love the pictures. I'd also love my rear end to be such that I'd be happy for someone to post it on their blog. Not going to happen.
6:26 PM

Badger said…
Why can't my boys (I'm including the 43 year old) make useful stuff like this instead of stupid shit like potato guns and electronic prisms? WHY?

And I have to ask.

Only ONE trip to the hardware store?! It's usually a minimum of three per project over here.
9:43 PM

Mrs. G. said…
It's like Universal Studios in your backyard-very cool.
10:09 PM

Anonymous said…
I never knew what a dolly track was - impressive!

Can K come over and build us a dolly track too and while he's at it does he know how to install railings? We've been waiting 3 months for the iron man! Cement steps without a railing & an active 4 year old = total nightmare.
1:51 AM

Anonymous said…
Fantastic project for the creative minds over at your place.
2:18 AM

Anonymous said…
I think you're very good at husband selecting. I wonder, have you done much match-making in your life? If the answer is anything but no, that would make a delightful future post.

Mary said…
I would be sitting alongside you - maybe not doing a crossword but sitting in comfortable silence.

I am assuming these people pay K a holding fee for his time. Otherwise I will be cross.

It must touch K that Middle is so interested/passionate about film.
5:01 AM

Unknown said…
What a great idea for a movie. You guys always have such interesting things going on. ditto some of the other comments.
3:10 PM