in which we call bullshit AND ARE WRONG

You know that story/article/email going around the internet about the 5 amazing things you can do with your cell phone?
I got it from two different people last week and then saw it on one of my favorite sites yesterday.
I don't really care about four of the five miraculous things but one stuck with me.
The claim is: Have you locked your keys in the car?
Does your car have remote keyless entry?
This may come in handy someday. Good reason to own a cell phone:
If you lock your keys In the car and the spare keys are at home, call someone at home on their cell phone from your cell phone. Hold your cell phone about a foot from your car door and have the person at your home press the unlock button, holding it near the mobile phone on their end. Your car will unlock. Saves someone from having to drive your keys to you. Distance is no object. You could be hundreds of miles away, and if you can reach someone who has the other 'remote' for your car, you can unlock the doors (or the trunk).

I wondered about it for about a week and then enlisted Middle in a little Myth Buster work.

I took my keys and my camera and my cellphone out to my car. 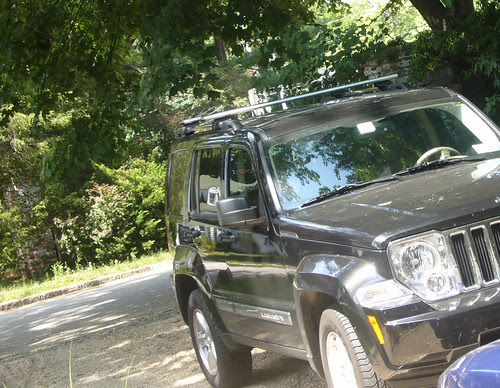 I left Middle in the kitchen with the house phone and K's keys. ( I see now that he was supposed to have a cell phone too - but no matter.) 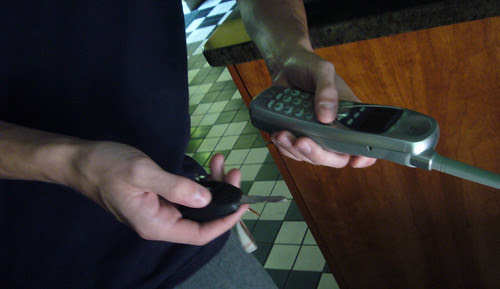 Though he was a very willing participant he was highly skeptical.

I got in my car and drove down the block. 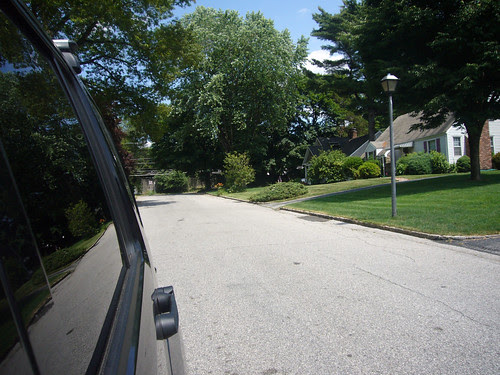 I was four houses away and could STILL SEE HIM STANDING IN THE DRIVEWAY.

I left the keys in the car and hit the lock button when I got out of the car.
Middle then proved that I was too close as he proceeded to unlock the car with K's keys from his position in the driveway down the street.

So I got back in the car.
I drove further down the block and AROUND THE CORNER. 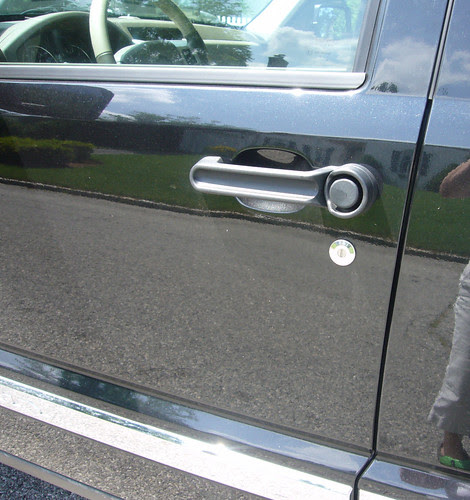 I put my keys in the center console.
I locked the car and closed the door. 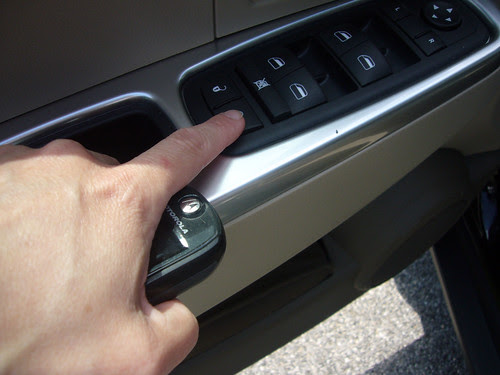 I called Middle.
To prove that the keys (at home) could not work from this distance Middle had me hang up the phone and he tried to unlock the car from the house.
It didn't work.
Then he called me back... 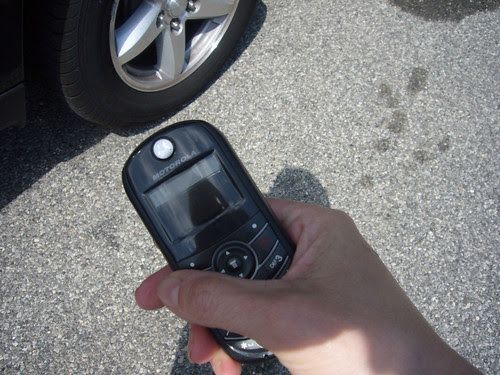 and we each tried a number of variations - 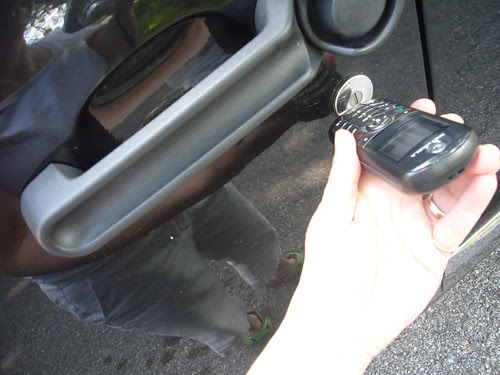 this position did not work. 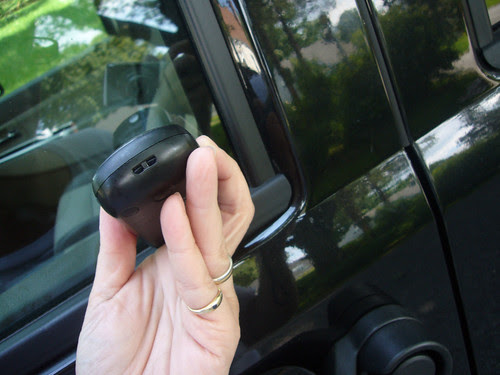 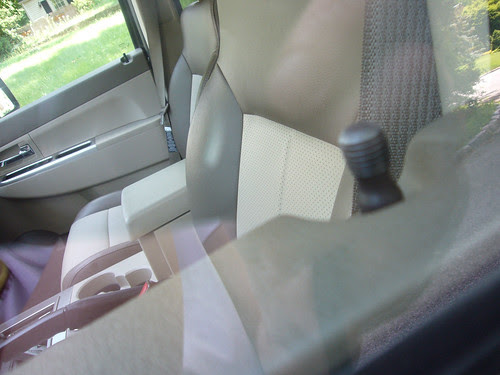 Middle unlocked my car from two blocks away. Through our phones, apparently.

I would never have believed it if I didn't see it myself.
We are going to try it from a greater distance in the near future.

We will NOT be bored this summer.

Hey! Go read my interview at Derfwad Manor whydon'tya.
Labels: but can we make fire with cellphones and keys

Loved your cook up chez Derfwad
Hen
x
6:40 AM

Miz S said…
Josh has always told me that this won't work. I will refer him to Professor blackbird in the future.
7:02 AM

Dani said…
Oh, c'mon! This was already proved as bogus because it's not done with soundwaves!

How did you get it to work? Is this some sort of Blackbird magic? Are you just trying to get me to drive far from my house so I can lock myself out while people point and stare? GAH!
7:24 AM

I too am a Jack Johnson fan and if you have a sec, I have a great 'live' and up close picture of him from his concert in Wisconsin last weekend!

Janet said…
Somehow I don't think you'd EVER be bored :-)

Anonymous said…
GET OUT!

Deirdre said…
Totally cool! I'll have to try it for myself also, as I generally take Snopes as the gospel!

Came here from Derfwad. I enjoyed your interview!
9:00 AM

Jennifer said…
Are you and the boys just sitting there laughing at all who's saying they are going to try it?
9:13 AM

And then there's YOUR family... Making fire, climbing on the roof, building dolly tracks, and unlocking cars with phones.

I really wish you were my neighbors.
9:23 AM

Heather said…
we tried this, but couldn't get it to work. must have been user error.
9:33 AM

Kathy Rogers said…
Cool! I wonder if it only works for certain models of cars or types of key thing-a-ma-jigs.

You can tell I'm a scientist by my impenetrable jargon...
9:36 AM

Stephanie said…
You guys are awesome.
9:51 AM

jenny said…
Ever consider running a camp for teenage boys? Or is this the curriculum for bloghere?

I only have one remote for my car, which my son locked inside the car this past week. In Maine.
This proves my need for the spare clicke.
10:16 AM

tracey.becker1@gmail.com said…
Interesting... now I just need an unlocking thingy as I don't have power locks!
10:21 AM

Burgh Baby said…
Are you serious? I'm all over this! My husband locks keys in cars all.the.time.
10:32 AM

Anonymous said…
I wish you had been MY mom. We would have had such fun.

barbra said…
I don't really care if it works or is an urban legend, I just love that you guys are into experiments and mythbusting!
1:18 PM

alice c said…
Can you do the mythbusters one where they re-float a boat with ping pong balls.

Or the shooting-the-lock one possibly.
2:15 PM

just jamie said…
Popped over from Derfwad. Great stuff. And NO FREAKIN' WAY did that work? I'm amazed. In awe. I think I even need to pee.

Thanks for the experiment.
4:14 PM

Mrs. G. said…
The kids in one of my writing classes begged me to let them try the "cell phone popcorn popping" experiment (there are several examples on You Tube). We ran out of time, so I'm hoping your tribe will do this one next.
4:45 PM

Anonymous said…
I loved seeing you (well, not really, but kind of) in Derfwad Manor today!
Crazy--I love that you and Middle are MythBusters. Do more!
5:40 PM

Anonymous said…
And here I thought you had the hots for Penelope Cruz! Cate Blanchett is so, uhm, milktoast. Tilda Swinton on the other hand, now she's an oddly exotic beauty. and so incredibly talented.

Mary said…
Yes saw that interview - and loved it!

This is the sort of thing I would go straight to hoaxslayer.com to check out whether it was genuine or not - in fact I will in a minute.

This is the sort of thing though that I might just have to try with the kids this holiday!
10:15 PM

HEATHER said…
"And then there's YOUR family... Making fire, climbing on the roof, building dolly tracks, and unlocking cars with phones. "

I am totally with Jenontheedge, I wish you all were my neighbors!! I too would have believed snopes and never tried this!! So much fun, so cool! Maybe I need to have two more boys so we can conjur up this kind of merriment! Not going to happen, so I will live vicariously through y'all.
Keep us all posted of your adventures! Have fun!
10:30 PM

Anonymous said…
who would have thought!
3:43 AM

Lou said…
You probably didn't need to actually lock yourself out of your car. You could of left your keys in your pocket for safe keeping, just in case.
9:23 AM