I'd like to tell you it was as profound as rolling that snowball. Or waiting at the airport. But it wasn't.
One day last week, I noticed a piece of string running alongside the curb on the road near our home. It ran for some distance, I saw, and I was not sure where it began or ended.
I drove past it four or five times a day, and, when Youngest mentioned it in the car one afternoon, I decided to see where it started and where it ended. 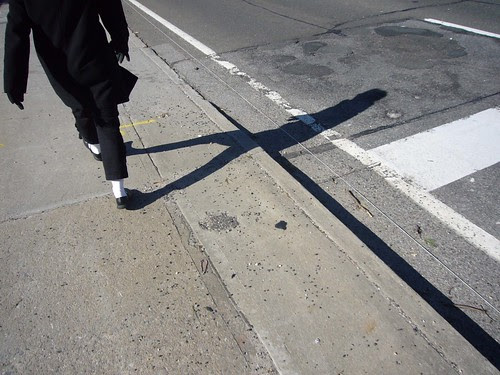 I began at a pretty fast clip. Do you see the string just to the left of the white highway line? Middle had a date to meet his girlfriend in town half an hour later, so I knew I had to take full advantage of his assistance. 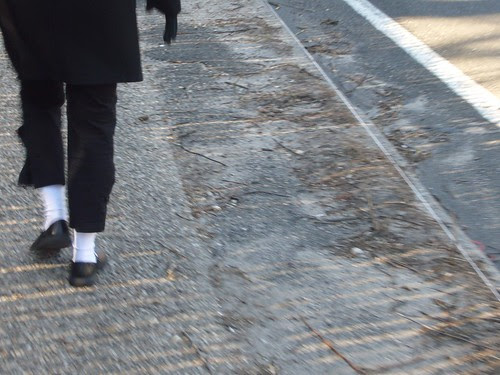 The string was stretched, probably, for a full half mile past our house.

I finally found the end of it, in front of the convenience store and started winding it up. 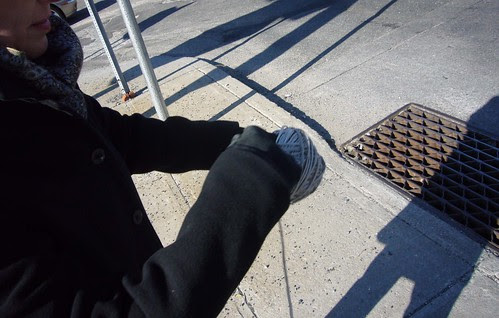 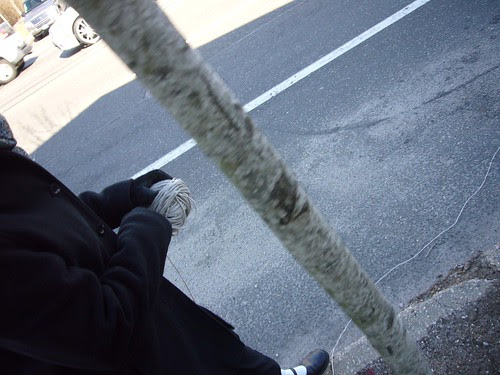 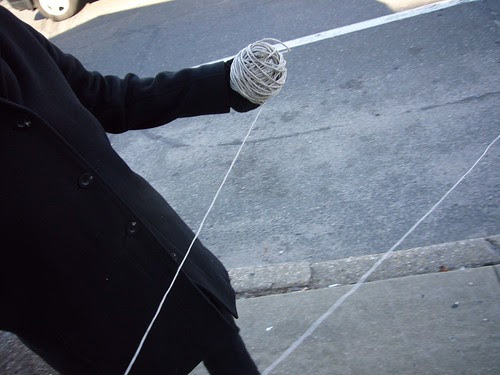 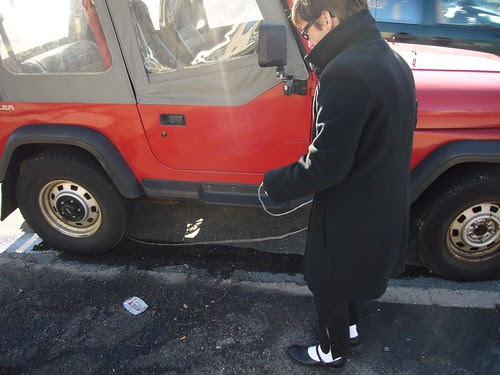 It went under a car.
And around a car - 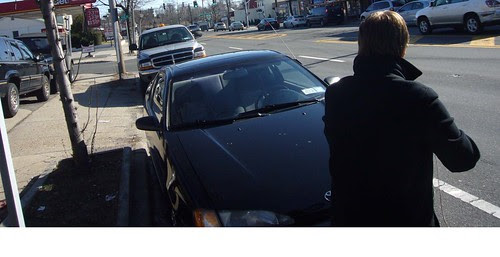 and right down the middle of the very busy street. 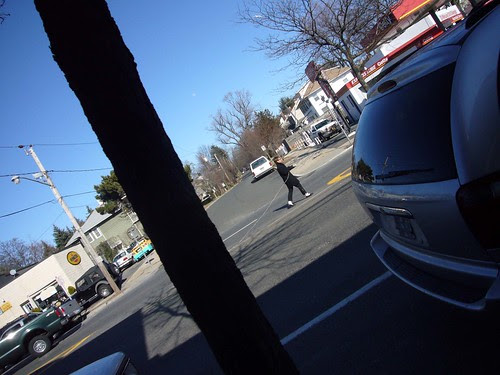 Sometimes the retrieval and winding of this string was somewhat dangerous. 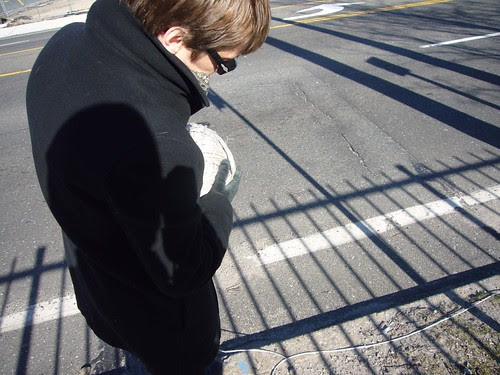 There were several moments wherein my fingers could have been amputated if the string got caught up in the vehicles speeding past me. 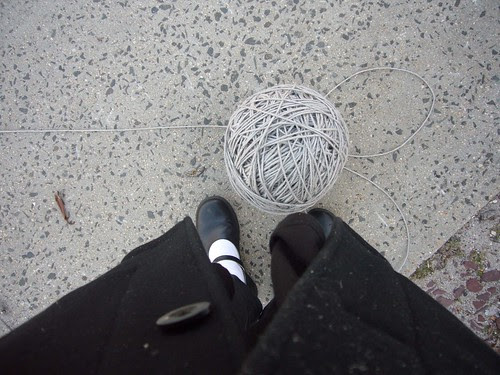 But once I began I could not stop. 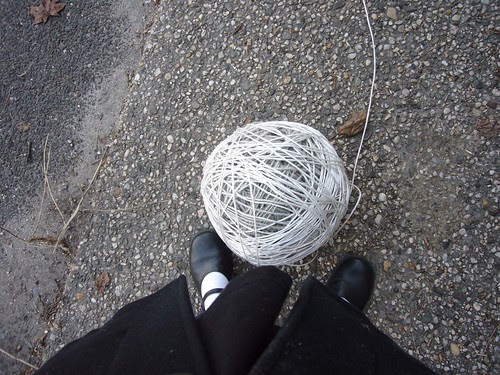 The string traveled well past my house and further down the road.
After about an hour all I could think of was finding the end of it.
At one point the string doubled back on itself and I felt very demoralized.
Not long after that I came to the end. 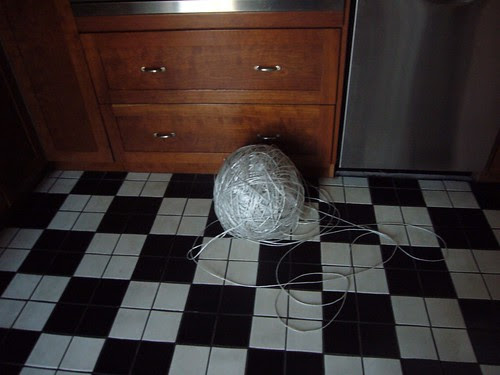 It's very large.
I'm guessing it was left along the road by the tree trimmers who were working overhead last week. They roped off the sidewalk. They also peed in my garden, I discovered whilst taking out the recycling.

I'm very proud of it.
Perhaps I'll put it on eBay.
Labels: I could never really sell it

KPB said…
God I hope you washed your hands.

Anonymous said…
Oh great! All those hours spent running a plumb line for the new sidewalks and YOU unravel the whole project in an hour!!!
8:00 AM

blackbird said…
Stacey - I caught them whilst taking out the recycles. I saw them peeing on one of my trees.
8:21 AM

alice c said…
I am sitting here worrying about the person who laid it out as a Modern Art Installation.
8:49 AM

Anonymous said…
I admire your wisdom to know what is important in life. Don't you dare sell it and don't ever let it unravel again. HAIL TO THEE!!
9:15 AM

Ali said…
'With my big ball of string, I can do anything. Anything, anything, anything at all' - I loved that book as a child and my kids love it now. But you? You can live it!
9:29 AM

Poppy Buxom said…
I think you should put the big ball of string out in your yard exactly where the big ball of snow used to be. (I mean, if it has actually melted.) It will serve as the Blackbird Big Ball Memorial.

And it will drive your neighbors crazy.
9:49 AM

Anonymous said…
Maybe it was a religious artifact of the Flying Spaghetti Monster.
9:50 AM

RW said…
I wonder if anyone is going to notice the string is missing?
9:59 AM

Dani said…
Kim - I was thinking the same exact thing.

islaygirl said…
it wasn't a whatchamacallit for an orthodox jewish community was it? ah, here it is:

Grandma Cebe said…
Can I "borrow" this post to use when my husband comes home and asks me what I did today? At least with a ginormus ball of string to show him, I'd have some evidence that I didn't sit around all day and eat bon-bons.:)
10:44 AM

Anonymous said…
ooooh.
Intriguing. The things you come up with...
Thanks for the so rare shots of PART of you.
I sure hope you laughe at the peeing guys...HA.
10:47 AM

Anonymous said…
Wow. The snaps are fantastic. It's like reading a picture book.
What does a giant ball of string get on ebay these days?
11:50 AM

MsCellania said…
Fascinating.
As we have the same thing here - mystery lengths of string along the road. I thought maybe they were something to do with the striping (painting) or maybe for survey work. I think it should be placed in your front yard. And you should do an entire Sculpture Trail to go along with it. http://www.sculpturetrail.com
Is this the Same Girlfriend or has Middle a new one?
12:32 PM

Anonymous said…
Sometimes the blog fodder just falls into your lap. Or into your street, as it were. Of course, you have to be clever enough to recognize it as such. Which you are.

But manohman are the stripe painters gonna be ticked off when their plumb line is gone...
2:03 PM

Amy A. said…
There is nothing cooler than a woman with a mission.
3:44 PM

Mary said…
I'm a bit like Alice C and worrying that it was for marking lines.

That's the kind of anxiety ridden woman I am.

Terese said…
A mother of three boys always knows when someone has peed in the garden - ask me.....

Anonymous said…
I love that you followed the string from end to end. I love that one of your boys actually documented the process.

I need to know about those shoes you're wearing, specifically a brand name.
4:32 PM

Saoirse said…
"I'm very proud of it" -- the string, not the pee in your garden from the tree trimmers, right?!

Anonymous said…
Look how adorable you are! Your gestalt is so much like your boys, in photos.
5:02 PM

Lauri said…
This is the reason you are the first blog I check every morning...your uniqueness is so refreshing...your boys are lucky to have you
7:18 PM

Anonymous said…
And here I was, sure that your boys had left if for you, knowing your penchant for string, and taking bets on how long you could let it be!
ErinH
9:39 PM

Kathy Rogers said…
I was thinking about that eruv thing, too. But it wouldn't have been just lying on the ground like that.

Velma said…
This post is now enshrined in my "Top 10 Best Posts EVAH!" list. I love the possibilities of that ball of string. E-bay, sure, but what about caning a chair with it? Or having it bronzed for the garden?
3:05 PM

ps I only floss the night before, and the morning of my dentist appointments, and then full out lie about flossing twice a day ;-)
5:11 PM

you have beautiful hair- what shampoo do you use-like minds want to know??

I thought about you the other day-we were driving up to the Sierra's and there were all these amazing rocks and boulders-smooth and in cool formations-so it made me think of you.
12:43 PM

It's Garnier something or other - I don't know exactly because I transfer it to a plain white bottle because I'm crazy like that...
1:05 PM