I was bored and I managed to convince Middle to come outside with me.
We'd had a nice dump of snow, which slowly piled up until there was about ten inches.
I thought we should build something...
Many ideas were discussed, and some were even attempted: a pyramid, the monolith from 2001, the faces of the presidents - a head from Easter Island. 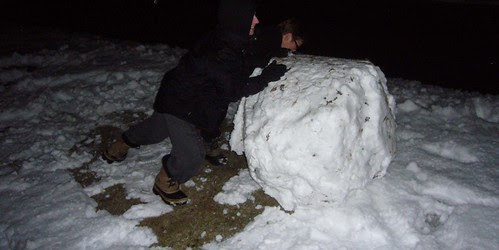 We rolled for a long time before K came out to take pictures. 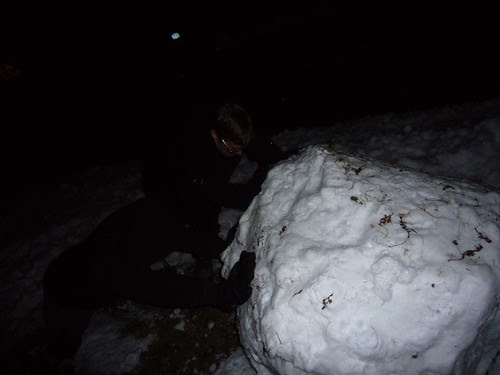 Our yard appears to be flat. But it turns out that there's a slight incline. 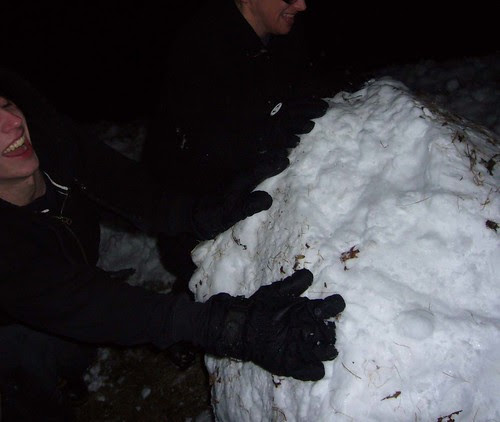 It was much harder that I thought it would be. The snow was incredibly heavy and we were often reduced to paralyzing laughter. 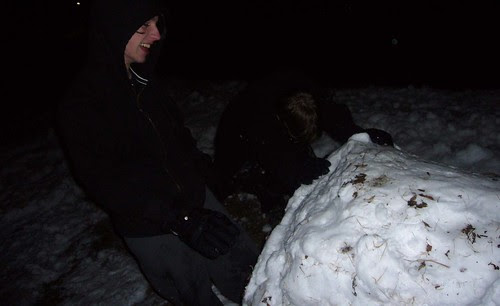 Youngest heard us groaning and laughing and suited up to assist. 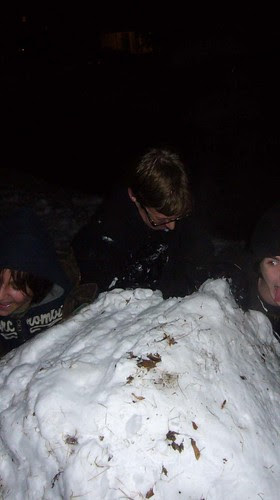 He was surprisingly strong. His enthusiasm never wanes. 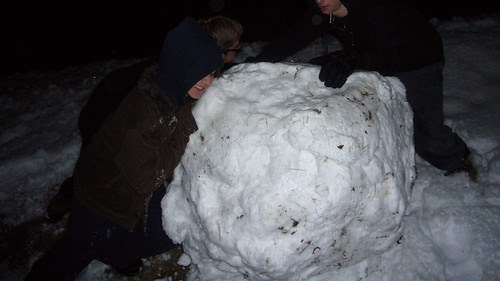 And then Oldest came running - loud and excited, as is his way, to help with the pushing.

K put down the camera and we rolled and pushed and shoved, fighting together, laughing and screaming...at one point our neighbor came outside and asked if the cable tv had gone out.
We were focused, concentrated, exhilarated. All five of us. 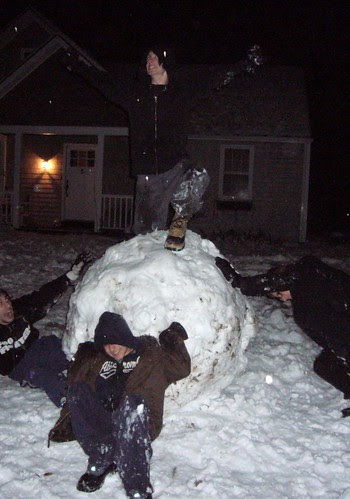 We made the biggest damn snowball in the world.

It will take a long time to melt.

And the whole time we were making it, my mind was racing.
Watching my boys interact, things have been rough between them lately, watching us all work together, being pleased that no one had to be coaxed to join in - that everyone was laughing and proud.

So, today, when I look outside 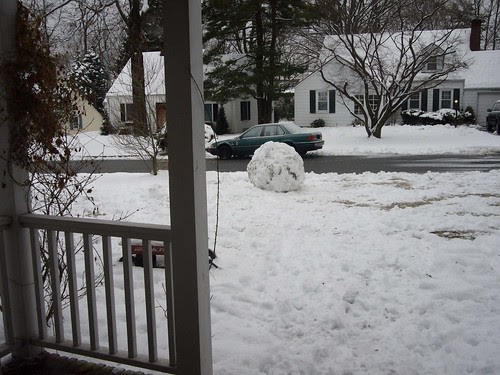 I'm still aware of all the things we face, but I feel pretty certain that we will prevail.

Labels: everything means something

Anonymous said…
I gotta say, I was hoping for a snowman, but the value of playing in the snow together is the point.
I wanted to make a snowman to take a nice picture of, but nobody would help me.
You know, before the east coast rains came to obliterate it.
8:55 AM

alice c said…
Oh! How I love this post.

Better than reading about the airport.
9:40 AM

Allison said…
Just fantastic. I look at your young men and I think about my little toddler boy and hope for him to grow into a strong and fun-loving young man too. That would have been a HUGE snowman, if that was the bottom snowball!
9:40 AM

MsCellania said…
You guys have made yourselves one big Unity symbol.
Soon to be seen on political campaigns everywhere "As Seen in Tuvulu and we're running with it..."
This was a wonderful, grab-ya-in-the-guts post, bb.
9:44 AM

Paula said…
And you know, when they're older they will get along like they did when they were really young.

When someone told me that, I wasn't so sure, but they did come back together again and are great friends now.
10:34 AM

Jen said…
wow, what a wonderful family. i have such hope for teenagers now.
11:23 AM

Anonymous said…
This made me reflect on the kind of togetherness that arose when families had to all work together in order to survive -- building their shelter, cultivating their crops, nurturing their animals, making anything else they needed.

And then I remembered that the family that can play together is the healthiest family of all. And I was so, so happy for you all.
11:25 AM

Tammy said…
every one of the comments said it for me. i'm keeping this post, as a reminder. your last sentence summed it up.

Poppy Buxom said…
Hey! There's a lot more snow out there. GET CRACKING.

Badger said…
Okay, so when it stops snowing, and things start melting, I want periodic photographic progress reports on the Giant Snowball of Love.

It will be like one of those candles that, when it burns all the way down, you get your wish.
12:47 PM

Jess said…
*thinking bb should send Youngest out to bury small charms in the snowball, so bb can take pictures of the meltingness, as per Badger*

Another excellent post, bb. I love your family.
1:13 PM

KPB said…
I love you.
And your family.

Annagrace said…
I know you will.

Grumpy but sweet said…
i am deeply envious of your snow joy. in the nl, little hope left for such wonder. xo to you.
5:42 PM

barbra said…
LOVE THIS. Thank you so much for sharing this!
6:00 PM

Unknown said…
Wiping the tears from my eyes. I so know what you mean. I tried to convince the kids to come out and go sledding with me. But nope, no go.

However, I smell a great contest in the making. Guess what day the last of the giant snowball finally meals!
7:19 PM

robiewankenobie said…
damn, but i love you, you internets stranger you.
9:06 PM

Anonymous said…
It looks like you had such fun with your boys -- made me totally smile. And those huge snowball? That just tells me you are showing those guys how to move mountains...
11:21 PM

islaygirl said…
you realize this is up there with the airport post? i love you, bb.
11:44 PM

Terese said…
We have to travel a long way to be with this much snow, I had to show your post to my kids so they could see. Way cool!!
2:55 AM

Stephanie said…
perfection, here. I love that this happened for all of you and you saw it for what it was and shared it with us.

Rose said…
It's so nice when it comes together like that isn't it? Enjoy.
1:22 PM

Jennifer (Jen on the Edge) said…
This is so great. All those smiling faces. Pure joy.
1:53 PM

Ellen Landrum said…
I loved this post so much. You are a great mom, BB- for starting the fun, then and now. Hoping the snowball inspires a happy spring- soon!
9:50 PM

Suse said…
Ah, that was lovely.

Now you have to photograph the ball every day, like when Fussy photographed her hair every day when she was growing it.
5:59 AM

RW said…
Wow. I disengaged from the computer for a short while and look at what has happened! This was an inspiring post BB! Thanks ever so much.
11:19 AM

Ginnie said…
I love this, bb. Love it. Thank you for the wonderful description - it brings back a lot of happy memories of playing in the snow with family and friends.
12:18 AM

Anonymous said…
So lovely! Your boys will have wonderful memories of this when they have their own families someday.
6:37 PM