of lunch and bags and lunch bags

Youngest pooled his Christmas money and did some research and bought himself one of these:

It was expensive but his decision. It does pose some problems though. First of all, Tuvaluan children seem to carry more books than Japanese children, but he's working on that. The other problem is that his usual brown bag lunch does not fit in his shiny new Japanese school bag.

This issue stirred a steaming pot of research soup, as it were, and prompted a visit to a new Asian market nearby.

I thought he might want one of these rigs -

as he is enamored of all things Japanese, but somehow, it didn't appeal to him.

and I'm wondering if it will inspire me. I hate packing lunches you know. Maybe if I fill each of the little boxes with something interesting I will hate it less. Maybe not.

I had one of these in my cart for a while -

but decided against it, with K's help. Youngest didn't like it either.

The new Asian market was fun. It was full of mostly Chinese products and we don't know much about Chinese things. 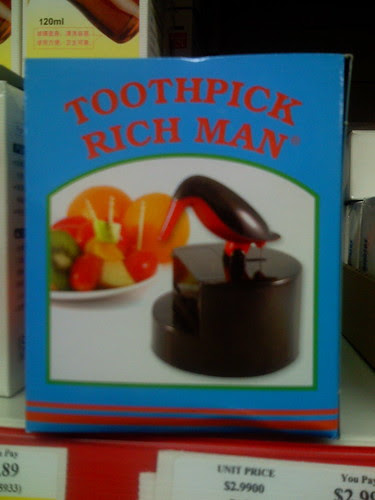 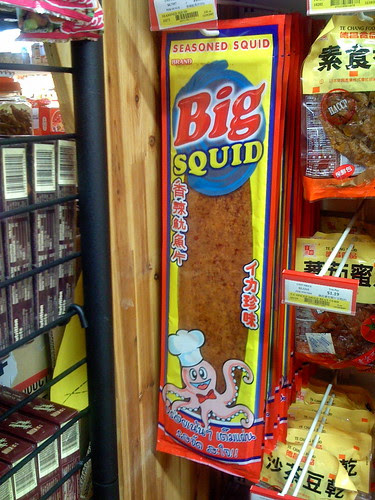 K wanted this very badly. I wouldn't let him buy it. YOU WOULDN'T EITHER. IMAGINE THE SMELL? 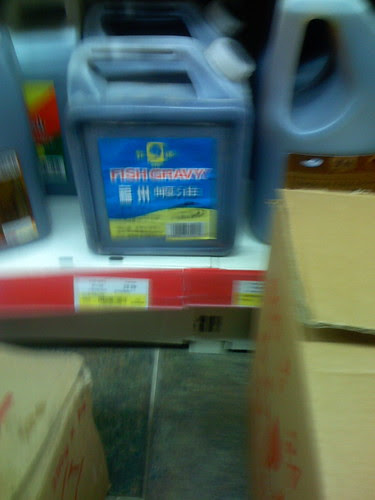 I swear, if he SAW this? He would have bought it. Fortunately for me, and the children, I did not create a fuss when I spied it. Which is why the picture is out of focus. I told him I needed his phone to make a call. Nothing holds less appeal for me than a gallon of fish gravy. Except, maybe, Japanese cars. 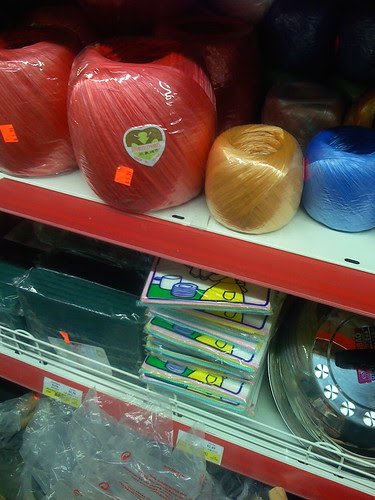 They had some lovely twine. But I didn't buy any. My spool of red and white bakery string is going to last at least ten years.

For ME, two for a dollar makes this particular item LESS appealing. 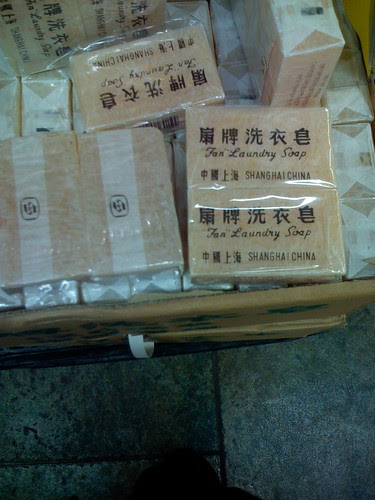 Tempting, yes, but I didn't buy any. 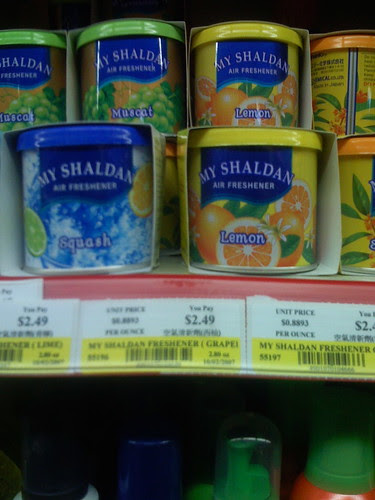 My (Freakin) Shaldan turns up in EVERY FOREIGN MARKET WE VISIT. What do they know that we don't, about the Shaldan? WHAT? Why did I not sniff the squash scented one?
The world may never know. 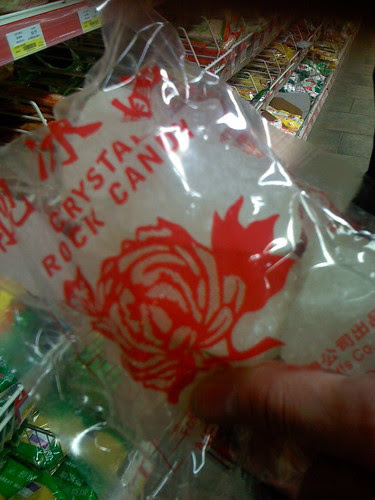 Seriously? This was the biggest rock candy I have ever seen. Each nugget was the size of K's fist. There's no way you could get them in your mouth - although it would be fun to get a bunch of people together and have them all try. 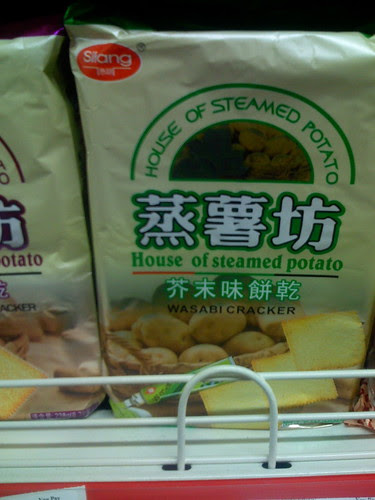 If this product had anything to do with steamed potatoes I might have purchased it.
It doesn't.

It was all I could do to get K out of there. He was completely enthralled with the duck parts and fish faces.

He plans on experimenting in the field of wonton soup sometime soon.

I bought a bag too, last week.
I had seen this one:

and I liked it.
However, I BOUGHT this one -

for SIX DOLLARS. The only draw-back is the velcro.
I'm hoping my pal Wendy can help me figure out what to do about that as the ripping sounds and difficulty of use are getting on my nerves.

In the meantime, I've packed a semi-Japanese lunch in a flat plastic container. Don't worry, you won't be finding any of those impressive bento box posts over here....

Anonymous said…
Thank GOD you did not buy the first bag. I would have had to driven there and had a handbag intervention. Cover the velcro with small cloth patches and then affix what ever closure you would like.

By the way tell Youngest he rocks. Mine insisted he had to have a briefcase(!) in elementary school. It also had to be one of those silver aluminum ones!! I am not to surprised now that at 16 he is looking into business school. :)
7:48 AM

Geggie said…
I love the compartmentalized lunch box!
9:14 AM

Jennifer (Jen on the Edge) said…
My girls have never ever bought lunch at school -- the food is just too nasty. Accordingly, we have packed lunches for two children every day for years now. I insist that the girls be involved in the process as 1) they're old enough to pack their own damn food and 2) there's no complaining that they didn't like their lunch.

If my older girl ever sees that Bento set, her OCD would totally kick in and she'd insist on having one so that everything fits just so.

Oh, and I like your new bag and am very impressed by Youngest's excellent taste.
9:27 AM

Fannie said…
Packing lunches was one of the few chores the Saint and I routinely whined about. We both disliked it and used various means of trickery over the years to get out of it. (Am coveting Youngest’s bag.)
9:44 AM

BabelBabe said…
i'm with gabe - i like the bag you bought much better.

and my idea of hell is packing a pb&j every single morning. primo's only in first grade - you do the math and welcome to my hell.
9:45 AM

Anonymous said…
How cool is some of that stuff? And how completely, well, fish gravy? Ew. Thanks for bringing us along on your trip through the store, though.
9:51 AM

robiewankenobie said…
we rocked the bento all of year one, but i've developed a fear of leaching plastic. i wish i hadn't, because that laptop lunch has always appealed to me. i've got the metal box in my cart right now. it would be so much easier if i could see one in person.

Unknown said…
What an interesting market. Can't imagine what your husband would make with all those fish products. When I was a kid i worked in a fish market in Cleveland Ohio - my Uncles. Not often though just holidays.
10:39 AM

Joke said…
As a result of having his own Santoku knife, NOS -- all of 10, incidentally -- has decided he wants to become a samurai or a ninja.

Therefore, he wants a non-plasticky Bento box to take sushi to school.

P.S. That squid jerky smells like the septic tank at a cat food cannery. We had an exchange student from Hong King and he used to get that in his "care packages."
1:08 PM

Wendy said…
I'll put the bag closure issue on one of my many lists.

BTW - I have one just like it in black fine wale cordouroy stashed for Ellie. Maybe for her birthday next year...
1:53 PM

Anonymous said…
The laundry soap rocks for grease stains :) Our asian market has gone upscale and no longer carries it -- I am hoarding my supply!
Love to shop vicariously with you!
2:57 PM

KPB said…
my children would die a thousand deaths if I gave them anything remotely resembling one of those bento boxes for lunch. Apart from the fact it'd all go off in the heat, any deviation from a standard white bread sandwich, piece of fruit and perhaps a treat in the form of homemade biscuits or a slice of cake would apparently be the embodiment of the worst possible humiliation and social ostracism known to childkind.
4:18 PM

Anonymous said…
Once they hit middle school, they make their own lunches here. We'll see if that happens with the baby boy but the hormone sisters do it.
5:50 PM

Stacey said…
I love Asian supermarkets. We have a few not too far from our place and love checking out all unfamiliar products.
Wonton soup is divine, we have it at least once a week, so K wants a recipe let me know!
6:09 PM

Unknown said…
No one but you, bb, could make a trip through the Asian market so entertaining! Thanks for the laughs.
11:54 PM