Sometime last May, Youngest tested into the advanced art program at school -

Last week, Youngest took an art test. He had to prepare a portfolio and then do specific artistic exercises (they were instructed to sketch their shoe, a seated model and design a book jacket). If he passes he will be invited to take advanced art from this point forward, which he would greatly enjoy. I'm a little worried as I would have loved to have gotten involved in the portfolio part, as I'm sure other parents did. His looked a little mingy. But the morning of the test he ran downstairs and announced that he was wearing his Birkenstocks on purpose - much easier to draw than sneakers, he told me, as he had heard that this was one of the exercises. We've got our fingers crossed that he did well as it would be a nice ego stroke for him.
You should have heard him describing some of the other portfolios -
his sincerity in admiring the work of his classmates had a lump in my throat.

He was accepted into the Above and Beyond art program and has worked diligently (and through his surgery and recuperation AND with a broken finger these last weeks) to complete his projects and maintain the curriculum.

We were invited on Thursday to a showing of his (and his fellow student's) work as the session has ended. 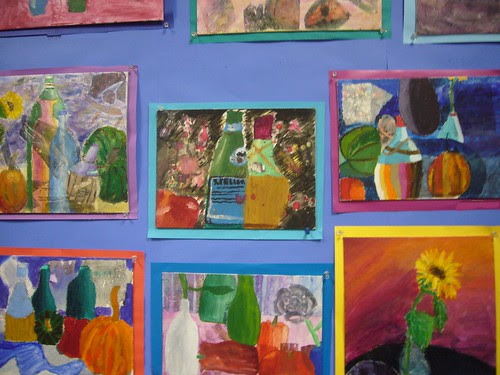 These were the first assignment. A still life. The teacher explained that this was the work in which all of their insecurities had to be dealt with. And it was true, these pictures weren't as confident-looking as the things we saw in the rest of the room.

The class was asked to submit designs for the winter concert program. This was Youngest's. 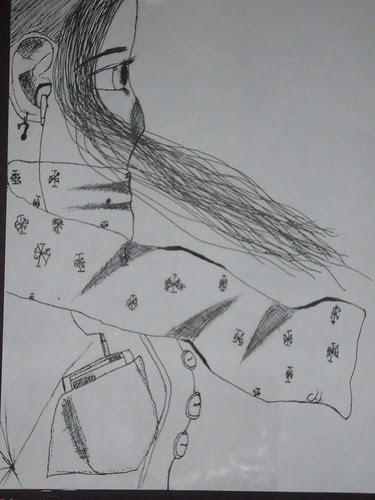 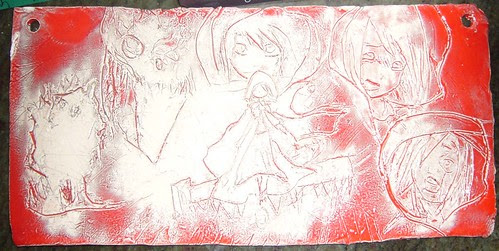 The learned about working in clay and each did a "narrative." Youngest did an anime version of Little Red Riding Hood. 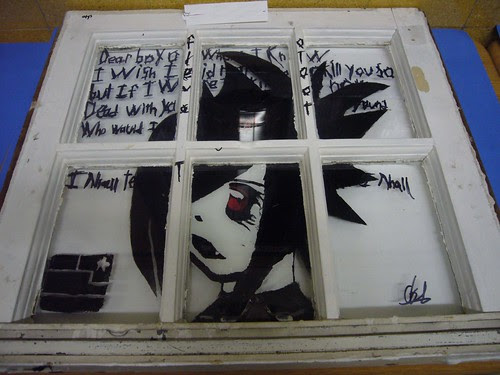 The anime bug bit again in an assignment in which the students painted on windows, which doesn't seem especially impressive at first - but then I realized that everything was done backwards...and in layers, with the smallest details painted in first. 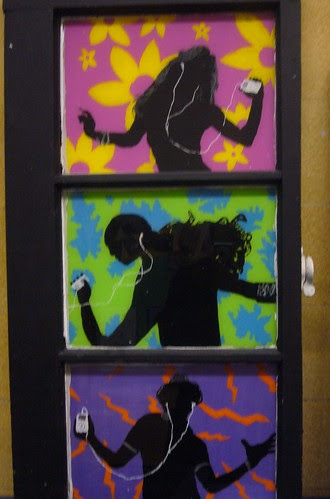 Done by a classmate.


All the work was impressive. This class is just leaving childhood - they will move up to high school in the fall, but it is the following collection of drawings that I liked best. 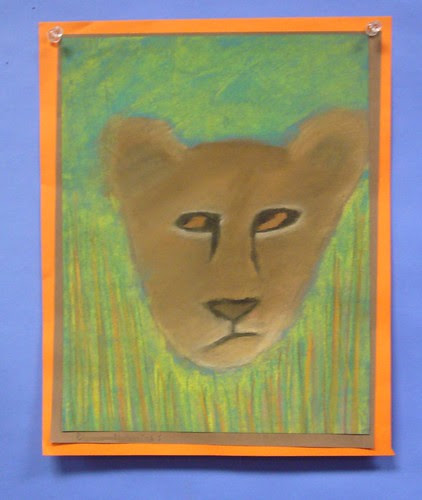 These animal portraits were stunning. 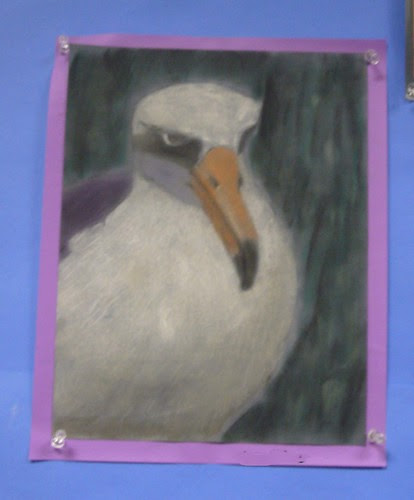 I love the choices the kids made. 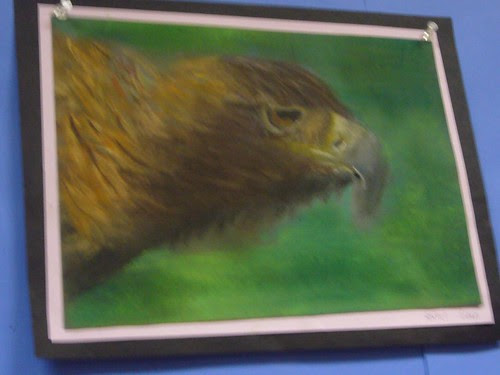 - And the personality each artist has instilled in the picture. 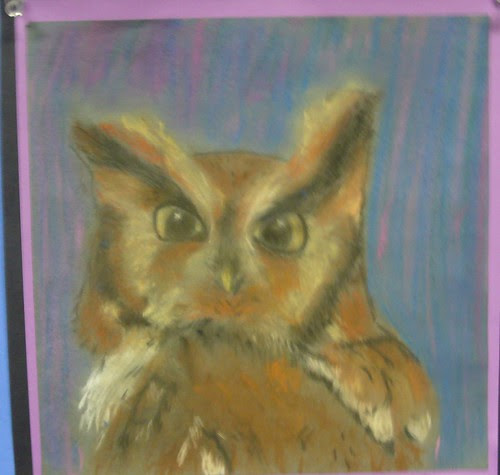 Each animal seems to have an expression. 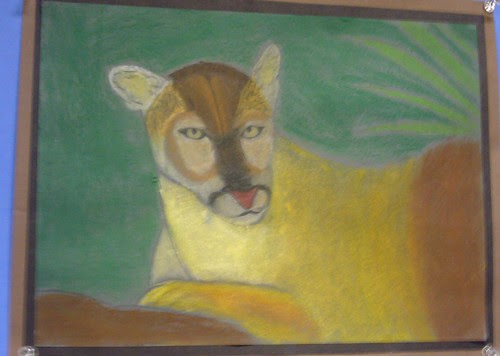 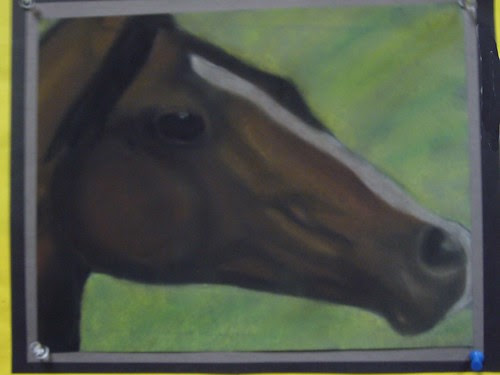 Youngest was especially fond of this one. 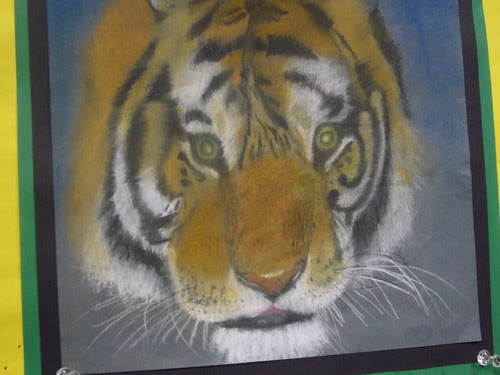 
Though the students are invited to use the studio whenever they like, I know that it will be a while before they have an experience like this one again.

Labels: artists in my home

RW said…
Absolutely fantastic.
Thanks for sharing. I too, am amazed and astounded by young talent - youngest did some fine work!

My children attend a Fine Arts school and they are surrounded by art of all genres every day - created by their fellow students.

I am thankful they have this opportunity.
10:22 AM

Badger said…
That is just so cool. My girl child is arty and I can only hope, once she's in the higher grades and whatnot, that she has opportunities like this.

Our niece V is Youngest's age and is also in advanced art classes at school. She has a definite signature style to her art already, which I find amazing. I really think I could pick her stuff out of a wall of art, even if it wasn't signed.
11:08 AM

I am so impressed. Not just the techniques and skills displayed, but the creativity each student possesses is tremendous. I would never have thought to combine anime with Little Red Riding Hood.
11:30 AM

That tiger is astounding.

I love the seagull and the tufted owl too.

Jan said…
Wow, how fortunate your are to have such a wonderful program and teacher who can help these kids express themselves like this! Very impressive.
12:26 PM

Bethany Bassett said…
Wow, and wow. The window anime was incredible!! You must be bursting into shiny happy pieces to have such talented, deep-souled sons.
1:04 PM

Anonymous said…
Awesome post. My younger son is artsy, too, but with neither the opportunities nor, frankly, the talent of Youngest. Your boy is truly impressive.

I love that the teacher showed how the students were dealing with their insecurities in the first work and how you could see their confidence grow in the later ones. To me, an artist's progression can be far more interesting than any individual work.
1:52 PM

Anonymous said…
wow, yougest sure is quite the artist. I'm not usually into anime stuff, but I'm very drawn to his 2 anime pieces. I think my favorite is the little red riding hood/clay piece. Thanks for sharing! I hope we get to see more in the future.
2:58 PM

Julia said…
Both anime are super. And I love that tiger. He jumps out of the paper with life. Go Youngest!
4:34 PM

(His Red Riding Hood was my favourite. Amazing. And I - ahhh - have quite strong feelings about the whole concept of anime that might not be said to be favourable)


Just the thought of painting backwards on glass made my head hurt.

Those animals are amazing. That expression on the owl? I can almost picture the child who drew it. And the cougar(?) just encapsulated a look I feel I use a LOT at the moment.

What a remarkable bunch of kids.


And just what have you and K been producing over there?
A hothouse of talent, that's what.
4:43 PM

KPB said…
OH - his tiger is by far the best. The eagle coming in second.

The question is, now he has achieved all his life goals, what's next?
4:44 PM

tut-tut said…
Very impressive and, frankly, inspiring, even for an old lady like me!
5:15 PM

Anonymous said…
Wonderful that the school places emphasis and value on the arts! I'm always astounded and overwhelmed by the incredible artistic talent of kids. I hope that Youngest keeps his enthusiasm fresh and that no art teacher knocks the confidence and talent out of him!
7:56 PM

Wendy said…
The window is phenomenal! I love the way the text continues past the glass. Not only did he have to paint it in reverse order, but also as a reverse image of what would appear on the front.

Caterina said…
Ditto on the WOWs. And applause to that school for not only keeping art in school, but for promoting it so well.

MizMell said…
I adore paintings and drawings. My Jeni is quite skilled. I have a self-portrait she did at 15 hanging in the living room. Looking at it makes me feel her presence although she is 1400 miles away.
8:06 AM

Keetha said…
My goodness. These are really something! Thanks for sharing.
9:00 AM

Miz S said…
Those are an artsy bunch of boys you have raised up. I loved all the artwork, but the tiger was astonishing.
9:07 AM

Anonymous said…
I'll never see anything close to this done by any youngster around here.
I bow to Youngest and to his art companions.
Truly wonderful.
2:40 PM

Fannie said…
Simply astounding. I have zero artistci skill myself, and so am in awe of those that do. Youngest should be very proud of himself.
3:06 PM

Pretty Things said…
I always love seeing the art of the school kids that they put up in the cafe of our Barnes and Noble -- there are so many talented kids!
6:44 PM

halloweenlover said…
Youngest is really AMAZING. He has such awesome talent! I adore the tiger also, clearly the best one.
8:38 PM

Ginnie said…
Wonderful artwork! Thanks for sharing. I've sent a link to the artists in my family, as I think they will really enjoy seeing all the talent.
6:06 AM