Middle's winter concert was the Maestro's last show.
The Maestro, you see, has been teaching music here in Tuvalu for over 30 years.
He's a character and we love him.
He's been known to dismiss the entire band after one note in rehearsal, he's been known to bust their chops over dress shirts, he's a superb showman. In short, we love the Maestro and were sad but not surprised to hear that he is retiring.
He's been threatening to go for several years and, now that Middle is ready to advance into the senior band, I'm willing to let him go.
Last night was not the band's best performance. They played well but they didn't have the impact they usually do.
Middle told me for a couple of weeks that they weren't up to par and that they had been led by the Maestro's mentor - the man he studied under as a child and with as an adult.

And so, last night, when they took the stage, I had a certain apprehension of emotions.
A milestone in Middle's life, and certainly in the Maestro's.
He introduced his mentor - 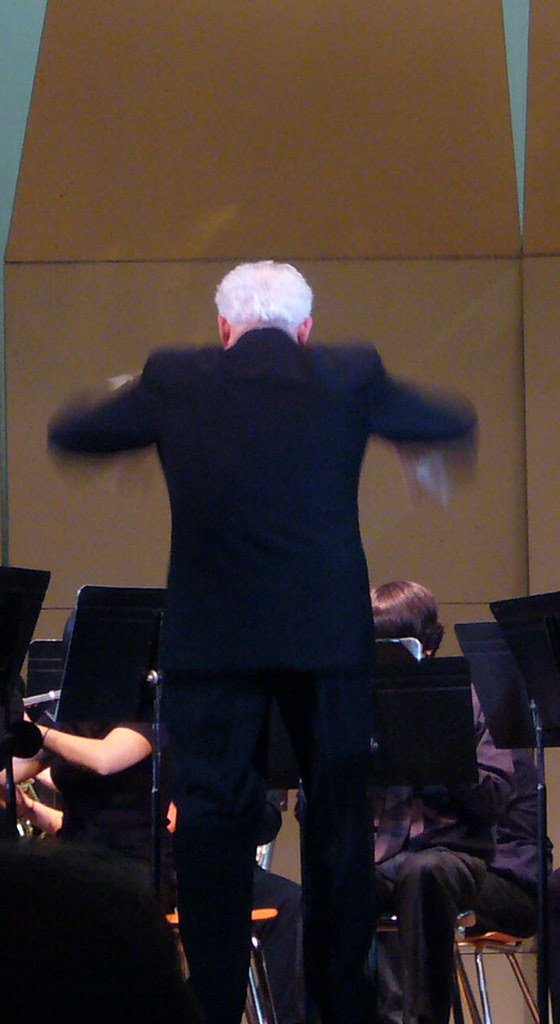 A small, older man with a twisted spine. He conducted admirably but not as stunningly as our Maestro.
And then, our Maestro appeared and made a speech. A speech which reduced me to tears, about his devotion, the children he's taught and his wife who has been by his side all these years. 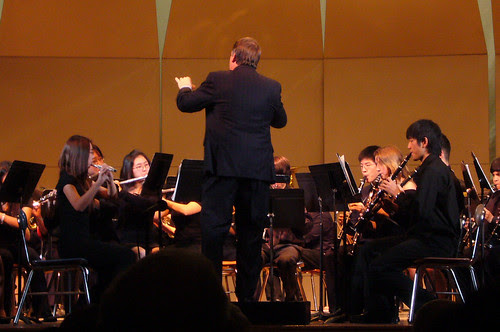 And then, he conducted. A march. As he has always done. And I was moved as I always am. It could be that my father adored marches - it could be the emotion of the moment, but it was grand. 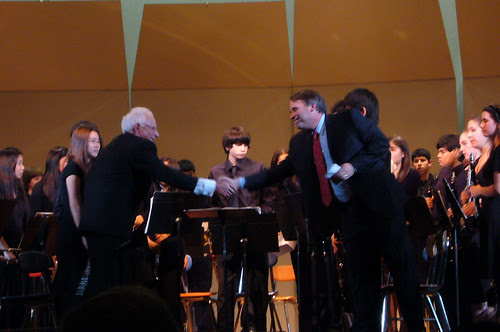 And with a handshake, and 45 years of creating music together, it was done.

We will miss him.

(All the while I could not see Middle - but there he was the whole time. Moved as well.) 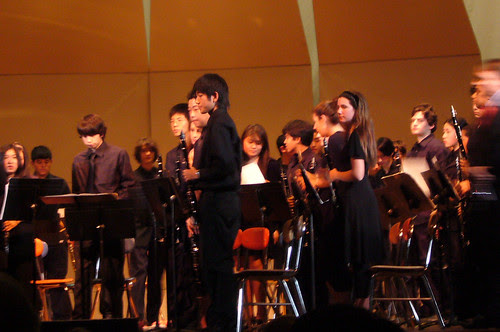 Anonymous said…
Mrs. Bowlby... the piano teacher. She retired as music teacher. But she continued to play piano for the music programs. She showed up and accompanied EVERY band. Middle school squeakers, little elementary singers, high school etc. The kids adored her. Year after year, there was Mrs. Bowlby on stage at the keys. Generations sang along to her playing. The loudest cheers every show from the kids was one Mrs. Bowlby stood to take her bow. Twas a sad day here in Whoville when Mrs. Bowlby passed.
7:28 AM

Anonymous said…
OK so it is minor but I can be a bit OCD and I typed 'one' instead of 'when' in my little Mrs. Bowlby note. And now it will bug me all morning. Sigh.
7:31 AM

Anonymous said…
Yes, teachers do make a difference, but so do good parents.
Your photos made me remember all the orchestra and band concerts and Christmas piano recitals. Miss Jessica played cello, Jenifer played flute and piano. Thanks for sharing.
8:37 AM

Anonymous said…
this looks so far from our schooling
How beautiful
10:18 AM

Paula said…
It's always difficult to let the good Ones go, even when they've earned it...
1:43 PM

Caterina said…
I'm trying to catch up on all your posts.....I really like this one, very touching.
12:20 PM