Do you remember what I saw last year on my way to school on Halloween?
I made TWO trips to school today - Youngest had to go in early to finish an art project, but I think he just wanted to wear his costume longer, 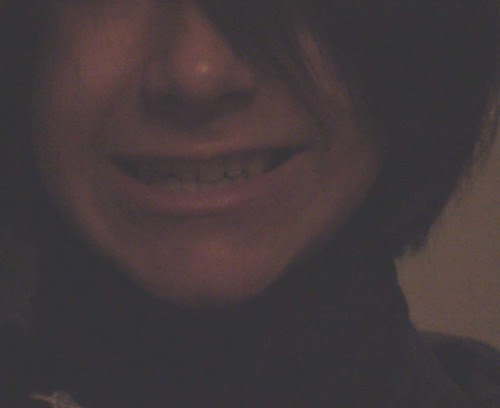 he's being a goth vampire. Can you see the great fangs over his perfect new teeth?

Middle sauntered out to the car later.

The real Jay and Silent Bob.

But it was the second trip with Middle where I saw more costumes....
A pack of girls (about 10) were dressed as firefighters. They had little red dresses and were wearing pretend firefighter coats with reflective tape on them. They were all wearing tall black high heeled boots and carrying little plastic fire hats. I suspect the fire hat portion of the costume will get tired sometime around 4th period.


A teacher crossed in front of my car with wicked witch tights on - black stripes. I've seen her before and she doesn't wear those tights every day, so I'm guessing it was a costume.
A male teacher took a cardboard rifle out of his coat in the parking lot. I'm not so cool with an armed teacher at school. I'm hoping he's a revolutionary war hero, but you never know.
Maybe we'll see him on the news tonight.

There was a kid with a scary latex mask at the top of the steps. He was surrounded by other kids in various stages of costume.
The campus was more animated this morning. I'm guessing it will be a fun day.
Sadly, Middle is too blase to report back about what he sees today.
And what did Middle go as?
Gray scale.

Jennifer (Jen on the Edge) said…
He did? Really? It's the creative costumes I appreciate more than the in-your-face ones.

Unknown said…
New principal at Bear's high school banned all costumes or even Halloween tee-shirts. I suspect he's an evangelical. Or maybe he's just sick of 15 year old girls dressed like hookers. Nah. My money's on evangelical.
9:06 AM

BabelBabe said…
I bet it's the hooker thing - I see little little kids dressed like tarts every year. Disney princesses-cum-prostitutes. SAD. Glad I have boys (Harry Potter, Cyclops from the X-Men, Bob the Builder)
10:39 AM

Wendy said…
When I taught in an elementary school I got the most fun seeing what the room moms showed up in. Every year, one mom came dressed as the sluttiest black cat you've ever seen. The custodian spent most of his day "helping" her carry stuff and emptying the trash cans in her kid's room. Not sure what she was going for with this look since the only other two guys in the building to impress were a happily married principal and a PE teacher who was long past his prime.
10:55 AM

Anonymous said…
Yay for Youngest's vampire fangs. Boo for little girls dressed as sluts. Yay for teacher in striped tights. Boo for teacher with cardboard gun. (Really, what was he thinking?) Yay for Middle and his gray-scale costume. My #2 son would love that; he too is a photography/graphic arts-type.
11:38 AM

Anonymous said…
Our middle and high school hasn't allowed costumes for years. It's kind of a little kids holiday in school here. Mine has enough work to do right now without a school day for Halloween time. When he gets through AP Physics and Regents Biology we will discuss his makeup! :)
7:12 PM

KPB said…
He went as grayscale?

When I was at school, he would have been the kinda boy I totally had a crush on but was way too fat, too loud and too awkward in that loud/dominant/scary way for him (or any boy for that matter) to even consider me gf material.

I detest any form of celebration requiring a costume. Full. Stop. Halloween is slowly gathering pace over here and I am not happy about it one little bit. Purely for the whole effort reward factor mind you.
11:07 PM

KPB said…
Jay and Silent Bob is also very clever. We've just been watching Dogma again - it's actually better with some age on it.
11:10 PM