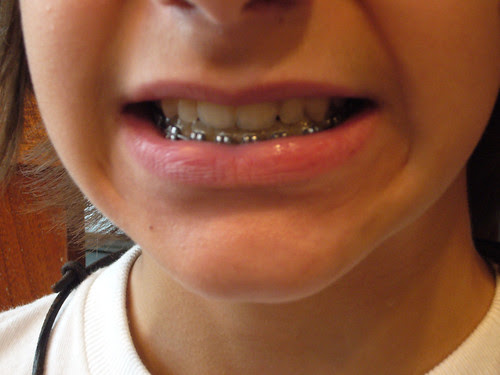 The fact of the matter is: Youngest only had his top braces taken off earlier this month. It took a couple of weeks for the dentist to have a 9am (what is up with that?) appointment open to remove the bottom braces....and, here's the kicker: install a permanent retainer.
I am told he will wear this small wire until he is at least 20 years old. And, even though I realize that this time will flash by, I just cannot imagine him with this thin wire in his mouth for seven years.

Anyway.
On a day I ended up going to the school six times, I drove Youngest to the school and fetched him 90 minutes later and took him to the dentist. 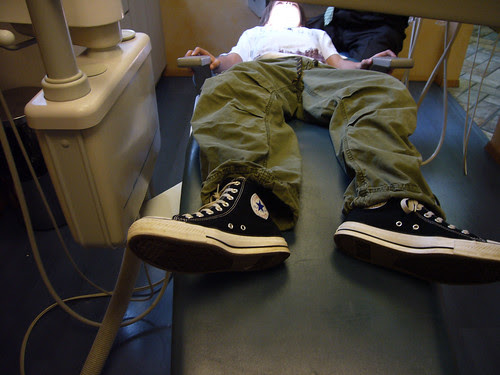 I've mentioned this dentist before - he's great at his job, truly, but he's just not the most sympathetic doctor in the world. As Youngest tends to be somewhat sensitive and removing braces is not painless, I knew I'd have to strike up a conversation with Doctor Not-so-touchy-feely to distract all three of us. (Youngest tends to wince or moan, he tends to tell Youngest it's NOTHING! and I tend to get anxious.) 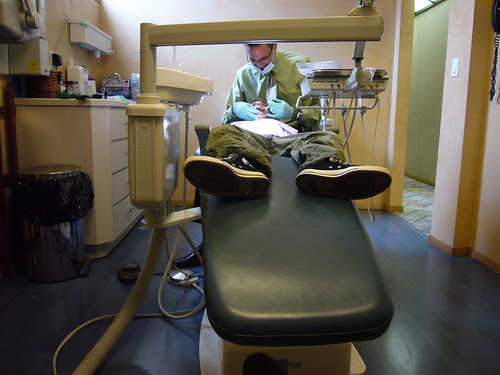 What do you like best and least about your job, I asked him.
The people and the people, he told me.
He told me he had just read an article in the paper about how much money dentists make and how unfair he thought it was. He is in practice alone and it cost nearly half a million dollars to finish dental school and set up his business.
Still, he explained, he sees 50 to 60 people a day. That's a lot of braces.
And when I was a teen only one or two classmates wore them. Now every kid has them.
He told me about the two schools of treatment in orthodonture and described what he liked about his version of treatment.
He was much chattier than he usually is - I guess because he had no other patients waiting.

It took about half an hour - 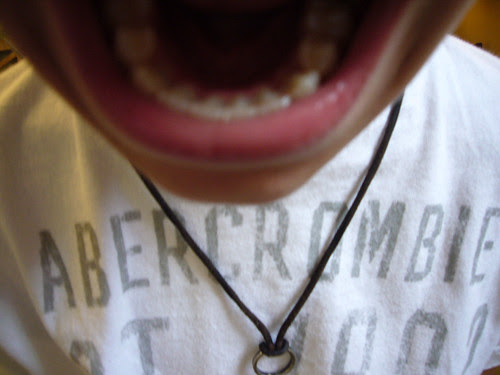 There is a thread of a wire along the inside of his bottom teeth.
He isn't supposed to bite into anything hard. Like an apple. For SEVEN YEARS.
Neither of us were terribly happy when that little piece of news was sprung upon us. 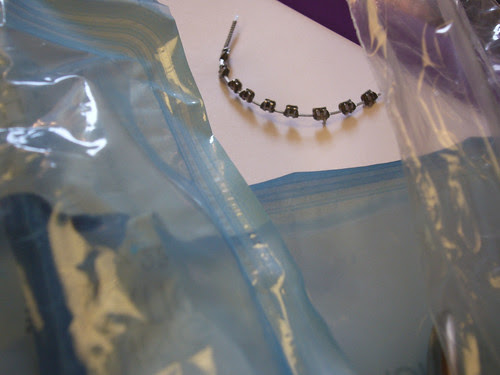 (hard to believe this was in his mouth for two years)

I need to talk to a friend of ours whose daughter has the same retainer.
Has she really not bitten into an apple for the past three years?

His smile is beautiful. And it should be.
Labels: all's well that ends well

MizMell said…
Both my girls had TWO PHASES of braces and both still have permanent retainers on the bottom STILL.

Their braces were glued on and had no bands (like your son's). Mine were bands and were pure silver... but that was a hundred years ago.

Badger said…
I have a crown on one of my front teeth and therefore can't bite into anything hard FOREVER. You get used to it. Cut the apples into wedges, cut the corn off the cob, etc.

My two don't have braces yet, but we already have an orthodontist. We are told the boy will eventually need IMPLANTS. Which they screw directly into your jawbone, apparently. Yeah, he doesn't know about that yet. I think I'll tell him WHEN HE'S THIRTY.
7:47 AM

Joke said…
On the bright side, at least Dr. Marathon Man, DMD didn't say "No pain, no gain."

Anonymous said…
I wore braces from the time I was 10 until 13. I had the permanent retainer put on then. I'm 40 now and it's still on. The only problem with it is food sometimes gets stuck in there and it makes it harder to floss. I don't remember being told to not bite into an apple way back then....
You are so clever the way you can handle the orthodontist to help out your son. My daughter would need help with that kind of doctor, too.
8:00 AM

Anonymous said…
My older son had an expander on the upper jaw for several years. Even though it was invisible to the world, he hated it. When the dentist took it off, #1 brought it home, took it outside on the sidewald, stomped on it, beat it with a hammer, and tried to talk me into driving the car over it.

Needless to say, he declined to have the upper braces that would have eliminated his overbite, which is pronounced although likewise somehow not visible to the world.
8:33 AM

Jennifer (Jen on the Edge) said…
We haven't embarked on the Braces Express yet, but it's coming.

When we got married, my husband still had a permanent retainer. I can assure you that he ate chips and candy and other hard things. But never apples. That would have been too healthy.
9:16 AM

Paula said…
Can't they give him a retainer to wear at night?

Now you get to worry about a wire in the mouth all the time. I swear I think someone stays up late at night trying to figure out crap like that to drive mothers crazy.
10:30 AM

Annagrace said…
I went to the big (famous) orthodontist school here for my years of complicated treatment. My doctor/student used my case for her Canadian boards. And since I could never convince (even with the help of the top oral surgeons in the area) any insurance company that I wasn't wanting jaw surgery for cosmetic reasons (!!!), my teeth have largely gone back to being crooked. Which means that once I'm done having babies I'll be starting the braces thing all over plus surgery. Needless to say, I CAN'T WAIT.

Congrats to youngest, though. His teeth are beeyootiful.
12:05 PM

Caset said…
I have had that lovely little wire in for about 12 years now and have never had any problems with apples... Flossing is another issue and I get a scolding every time I get my teeth cleaned. That is until the hygienist tries it herself and rescinds her finger-wagging. Oral-B makes some little threaders that make it a bit easier, but the thing is still a plaque trap.

Only good thing is there's never another adjustment and when they do finally take it off, no pain at all!
12:46 PM

alice c said…
Yay for Youngest. No more 'smiling' with your mouth closed!

MissM has a transparent retainer which looks like a mouthguard and wears it at night. She will have to wear it for 2-3 years but it is only for the upper jaw. Maybe the teeth on the lower jaw spread more easily.
1:06 PM

might I add...? said…
You are the sweetest mom, chatting up the orthodontist like that. And look at those teeth--they are gorgeous!

What I'm still waiting for is a pediatrician/children's orthodontist/dentist, etc. who specializes in after school/weekend appointments for children so they don't have to miss so much school. (Although I'm sure there are parents who don't mind the during-school visits, I personally find them annoying.)
1:07 PM

Anonymous said…
I have a plastic front tooth.

It was supposed to last a few years, a temporary fix.

I was told to not eat apples too.

Anonymous said…
Oh Lord. I shouldn't read all of this. Brizio is putting upper expander on Nov. 5th and our orthodontist said he's going to wear braces at least until he's 13. But now that I've seen what happened to Youngest...
sorry, I just dropped off the chair.
I'm OK.
2:09 PM

Heather said…
I have a permanent retainer behind my bottom teeth ~ I hate it since it's hard to clean behind it. But it's never stopped me eating apples.
4:25 PM

~ej said…
we're about to embark on the wonderful world of orthodontics....joy!! ;-)

Unknown said…
Why should these people rule your life? My son was supposed to wear plastic retainers ad nauseum. He'll be fine.
4:57 PM

KPB said…
GOOD LORD!
I thought it was archaic when I had braces from Years 7 to 10 or some such and then had to wear a 'plate' at night.
I have never ever even heard of this permanent metal thingymegigit. Ridiculous.
I'm with whoever it was who reckons someone just sits up all night thinking this kind of shit up just to make a mother's life a misery.
I now have a mouthguard to wear at night because I clench and grind my teeth and the transferred pain is agony.
Well, I did until I bit it into bits.
I hate the dentist.
5:20 AM

Anonymous said…
Oh, bb, it's so worth it, this dental/orthodontia paraphenalia.

Did I spell all that right? Oh well if I didn't.

I know what you mean about every kid having braces now. It was like that when my daughter was in middle school, and that was 20 ? years ago.

It wasn't something embarrassing, wearing braces, for her (it was for me).
It was normal.
Those kids had more metal in their mouths than does any Toyota manufacturing plant.

But as I said, it was worth it.

As for the permanent retainer thing, my neice has it, as does one of her two brothers (the other brother was born with perfect teeth, needed only a take out retainer for a couple of years)
The other two, well, they've both worn the permanent wire for the acceptable amount of years.

Last year was the last, and it was taken off and they were wire free.

And I have to say, it was worth it.

I'm a big fan of orthodontia. (And no, my husband isn't a dentist or orthodontist). It makes a huge difference in a child's appearance, a "natural" difference, and the kids need all the self confidence they can muster.

In my humble op, as it were.

Anonymous said…
I love my permanent bottom retainer. I got used to it pretty quick. I've had it for 10+ years. I'm thinking about never having it removed... Most of my friends who had braces and removable retainers stopped wearing the retainers, had to pay more money to get re-sized after a while, etc. etc. and now their bottom teeth are crooked again. But mine are still nice and straight and I love them. The difficulty in flossing is a small price to pay in my opinion. I still eat apples and all things hard with gusto as well... although I do remember being told to avoid them for a year while I adjusted.
8:02 PM