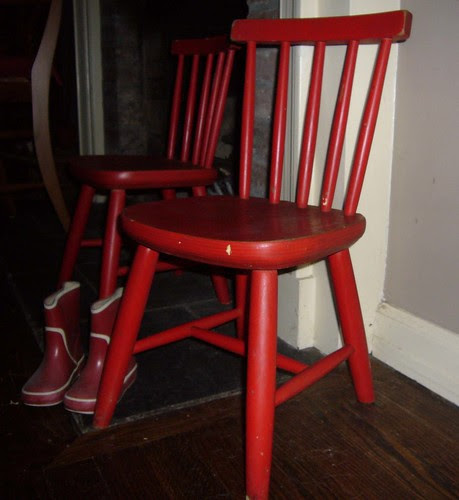 These little red chairs were in a shed we took down last weekend.
These little red chairs were the chairs of choice for three little bird boys.
Three meals a day were often eaten in them, pictures were drawn, puzzles were done and forts were built around them.
I was going to clean them up and give them away but all three boys protested.
As this is the house o'crappe, they are now in the living room.
(The teeny boots were Oldest's.)

Yesterday, whilst still on shore leave, Youngest had a dentist appointment.

Behold! His beautiful new smile.
The world of braces and palate expanders is behind us now, which is just fine with me.

We saw both the pulmonary doctor (who is clearly in love with Youngest) today and he checked out pretty well, and the surgeon who would keep him home the rest of this week but was pleased with his progress. Youngest has other ideas and is talking about going in to school tomorrow.
He promises to call if the day proves too long.
Labels: isn't it amazing what each day brings...

alice c said…
That is a pretty sassy smile!

Isn't it extraordinary how quickly he has recovered. The healing benefits of Mother love become apparent.
6:08 PM

Anonymous said…
sounds like you and youngest had a good day. best wishes to your family that youngest's medical ordeals are behind him.

I lurve the chairs. They are in remarkably good shape. My kids would have dismantled them at some point, like they have EVERYTHING ELSE IN MY HOUSE.
8:46 PM

Geggie said…
Oh! So great that Youngests check up went well. And what a great smile! Love the chairs.
10:10 PM

Jennifer (Jen on the Edge) said…
What a GORGEOUS smile! And I'm so glad he's feeling better.

And life continues on. You are done with braces and we are just beginning that journey.
11:02 PM

Mary said…
That smile is fantastic for all sorts of reasons!

And the chairs are great - I love red chairs - and I am glad the bird boys talked you into keeping them
11:48 PM

islaygirl said…
i still remember the day i got my braces off. dear God, that was 25 years ago. *sigh*

and yay for youngest and the healing.

TheOneTrueSue said…
I think things like little red chairs and little red boots will break my heart a little bit someday. So glad that your son is doing so well.
1:48 AM

Anonymous said…
That smile will help go through years of pain with B. It's smashing!
Cute little red chairs and boots and I l.o.v.e. that they didn't want to throw them away.
So happy to hear everything is doing well in Tuvalu land.
5:17 AM

Anonymous said…
A beautiful smile indeed. I think I'm a little in love with Youngest too... very pleased he's on the mend. Whew!
7:39 AM

RW said…
I am delighted to hear of the speedy recovery of your youngest.

Susie Sunshine said…
How could you even THINK of getting rid of the red chairs?!

Anonymous said…
So glad he is healing well!

My oldest just got the palate expander last week. After her first check by the ortho yesterday, I learned I am not properly turning it. He gave me a new key-which was shaped a little different than the first-and I'm hoping that solves the problem. We do not need her wearing that device anymore than necessary!
4:40 PM

MizMell said…
The red chairs are so cute! My girls had turquoise and hot pink chairs. They also both had two "phases" of braces, so I know how wonderful it is (for everyone) when they are finally removed.

Stephanie said…
happy stuff, the lot of it.