There was so much to see, so much we were fascinated with, I don't know where to begin. I'll jump right in.

An entire aisle of bamboo products enticed K, of course. 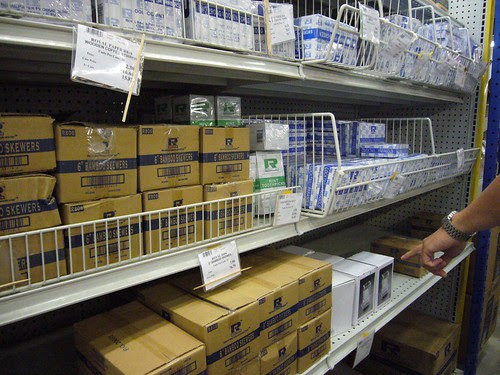 Are toothpicks really made of bamboo? I don't doubt it. I wonder what kind of business it is - how profitable. Can they make toothpicks from scraps? Am I over thinking?
Naaaaaaah. 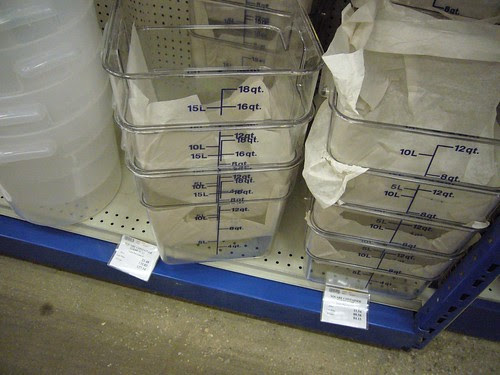 These are the small measuring cups. I joke. I am a jokester. 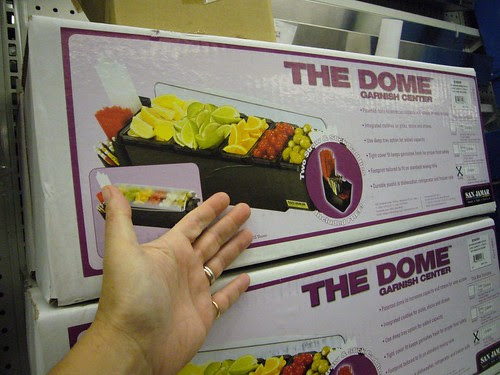 The Dome Garnish Center.
I heart it. 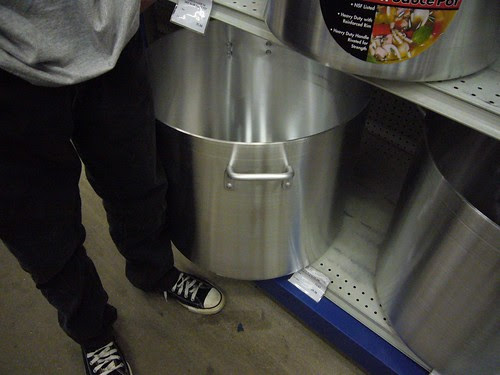 The medium sized pot. With Middle, for scale. 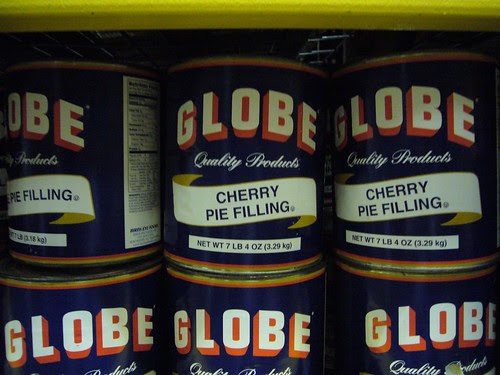 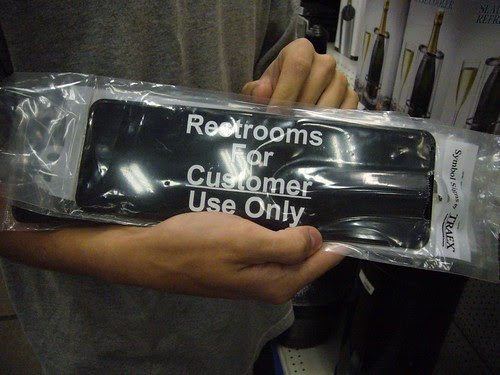 I know that Middle wanted this for the downstairs lav. But it was SIX DOLLARS. So, no. 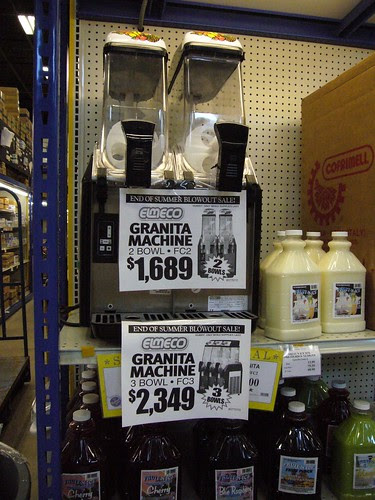 The granita machines are ON SALE. FYI - the end of August is a good time to buy one.
Doesn't that seem like a whole lot more money just for the three bowl machine? 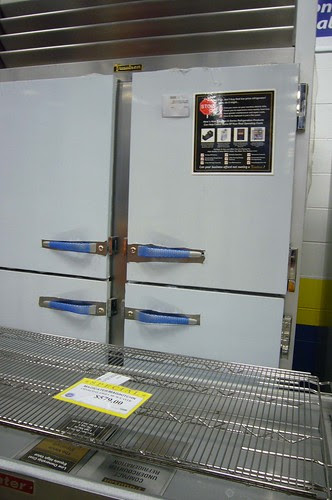 We SHOULD have bought this Traulsen instead of our Viking fridge.
It would have been cheaper too. 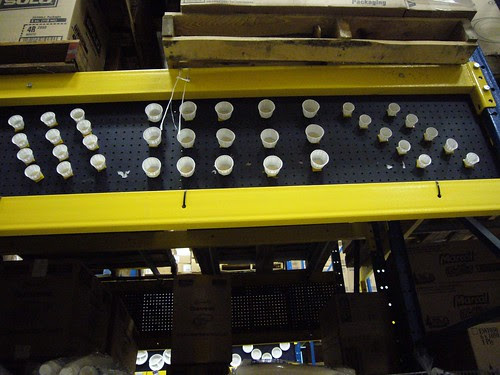 I've never thought about where the ketchup cups come from. NOW WE ALL KNOW. 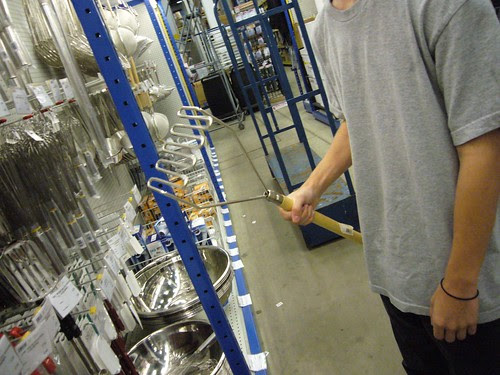 If you need a masher this big, we don't think you should be mashing by HAND. 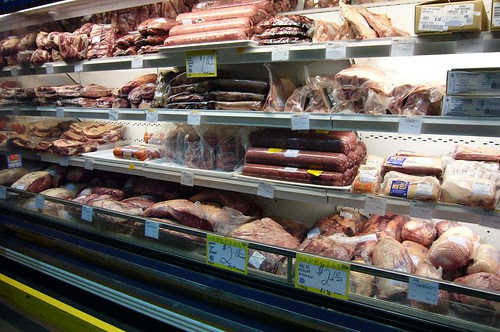 We're okay with meat, as it were, but this was, sort of, too much meat to look at. 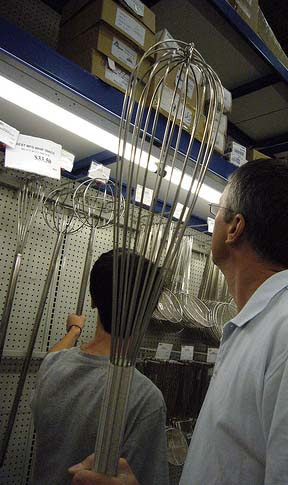 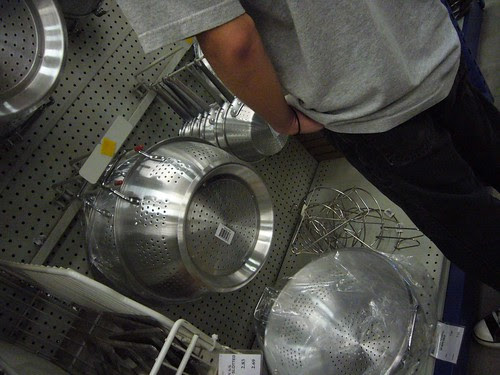 Once again, using Middle for scale. 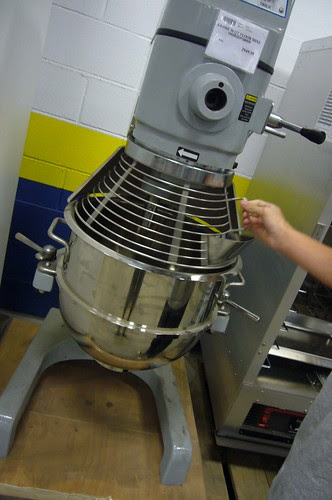 Welcome to the world of choosing your mixer by horsepower. 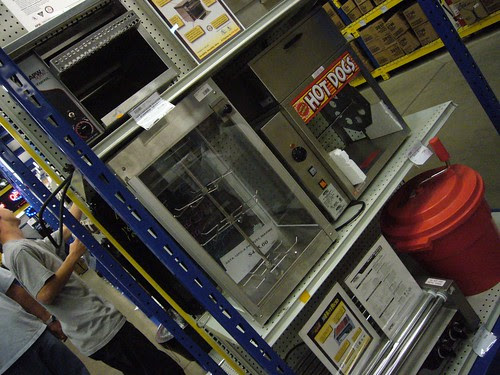 Youngest wants the pretzel machine. And a hot dog machine. 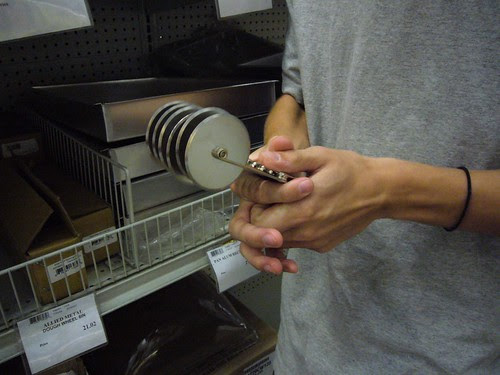 Middle was fond of this accordion slicer thing. 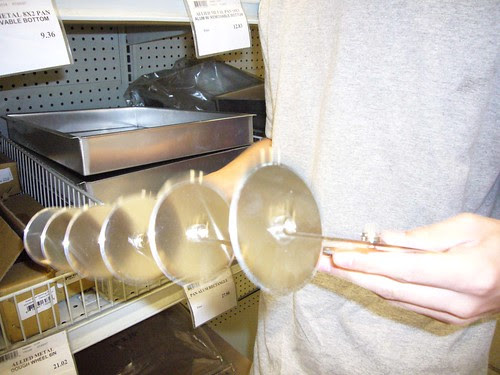 He liked these too. 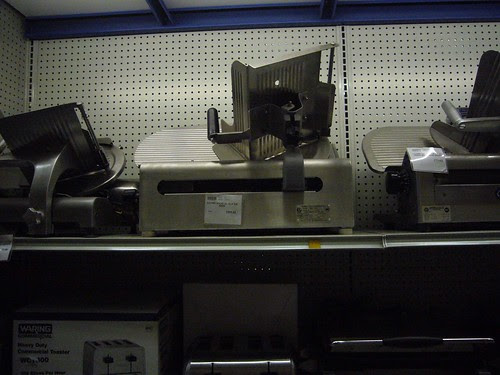 Maybe he's going to be some kind of professional slicer. 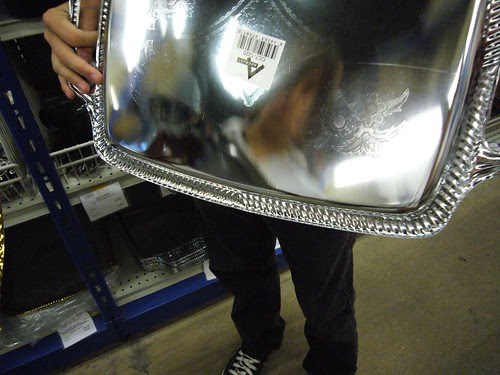 If you need silver trays, this is the place. 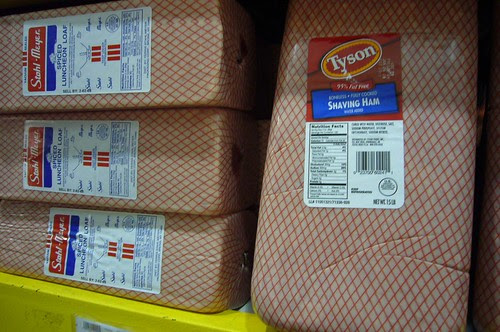 It occurs to me that I don't like the words 'shaving' and 'ham' next to each other. 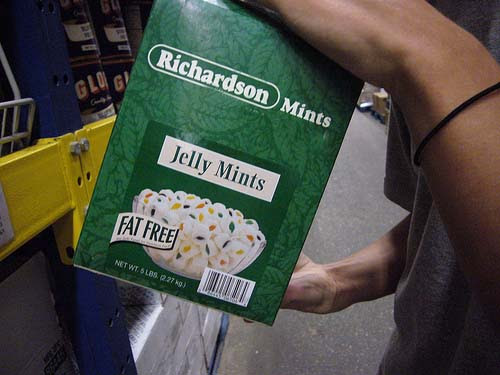 I KNEW they'd have those mints they have near the register at the diner! 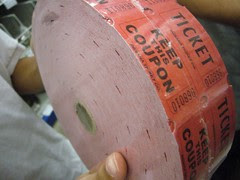 Did I ever tell you about Youngest's love of tickets? It's too long to tell now.
He freakin LOVES tickets. 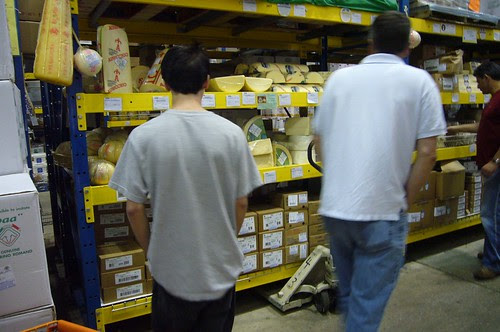 It may not have been FINE cheese, but there was a boat-load of it.

Finally, after jousting with whisks and finding coconut water and marveling at the size of the strainers, we found our ribs. 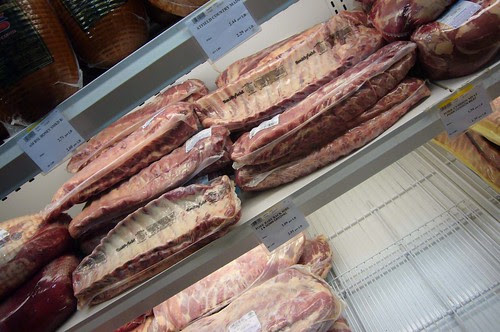 Maybe I'll tell you what we did with them.
Tomorrow.
Labels: lots o'meat

The photo of the two guys with their hands in their pockets, staring at the cheeses (cheez?)is great. Are they absolutely in awe of the possibilities?
9:00 AM

BabelBabe said…
you can tell i am pregnant because i could not even LOOK at the meat shots. Ugh.

About those ketcup caps: think about all the little innocuous daily things we use and pay no attention to. Tiny things. Everyday things. Take for granted things.

We were at a party where I was introduced to the guy who owned the company that made wire coat hangers. He inherited it from his dad who'd got it from his.

He told me there's a whole lot more to making a coat hanger than I would believe. I agreed that there probably was.

He felt no threat from the plastic coat hanger people, and the wooden hanger people cater to a different clientele--so the outlook for his company looked bright, well into the future.

Nice to know one thing we don't have to worry about is a shortage of wire coat hangers, isn't it?

Anonymous said…
Ooooo baby restaurant depot, that's my turf!
That very mixer we have at cac to make the frosting and cakes for the create a cake area. It's ginormous and none to fun to clean I assure you.
That slicer thingie is a pastry persons dream as you can ravioli or fettucine or whatever your heart out in perfectly straight lines.

Does your store leave orange coats outside the cheese and meat section for people to throw on? Cause baby it is COLD in there.

I must admit that some days that place is enough to put me off food forever...a little bit TOO MUCH.
10:13 AM

Badger said…
Hey! My restaurant supply store just has non-food items! I feel ripped off. But then again, you don't need a membership to shop there.

But can you not buy racks of ribs that big at the supermarket in Tuvalu? Every supermarket here has them. HUGE SLABS O' RIBS. Maybe it's a Texas thing?
10:47 AM

robiewankenobie said…
you know when you're walking around with useless knowledge just cluttering up your headspace? and you are just dying DYING, i tell you, to find an outlet? for years YEARS i have been wanting to tell someone that the primary export of lichtenstein is toothpicks. and no, i don't think they use bamboo.
10:50 AM

Anonymous said…
This was the Most. Fun. Post Ever. Newborn size cherry pie filling! Mixers by horsepower! A masher big enough to squash a small country!

Shelly Kang said…
Hey, BB! I can't see the pictures! I tried both Netscape and IE, and Flickr is telling me I don't have permission to view the photos. I want to go shopping with you!
12:47 PM

alice c said…
What I want to know is why they did not escort you off the premises because you must have been laughing so hard by the end.

Those ribs look very scary - is there another species that I was not aware of that is twice the size of European pigs?
1:49 PM

Unknown said…
I LOVE me some restaurant supply store shopping!! I can never escape without purchasing at least one item I had no intention of buying prior to entering the store.

Like Badger, my restaurant supply stores only carry non-food items (well, non-meat & dairy; LOTS of dry goods & seasonings) as far as I can tell. Also no membership required.

I would seriously consider getting my next stove there, though.
2:42 PM

MizMell said…
Now that looks like the kind of place I could just get lost in! I have a stainless steel, and kitchen gadget fetish.

I've got a good spice rub recipe for ribs, if you're interested.
2:46 PM

Anonymous said…
Restaurant supply stores are dangerous, dangerous places for me. Almost as dangerous as book stores. And sadly, we do not have actual food in our local restaurant supply place, just lots and lots of things with which to cook the food.

Shelly Kang said…
Now I've seen the pictures, and I want to go to the restaurant supply store! I need one of those giant stock pots for soup making, and I bet they have big steamer pots that would be great for yarn dyeing. And RIBS! Yum!
3:08 PM

Poppy Buxom said…
My hands are itching to get at the on-line WW point calculator. I need to know how many points are in a Sugar Free! 5 pound sack of jelly mints.
5:00 PM

But newborn size cans of cherry pie filling? That is unique to your world. I'm with Badger, ours never have food in them, just the instruments of glory.
7:59 PM

Alice said…
how does Middle feel about being used for size portions?
i hope he got a fun treat at the end for his kind service...
9:17 AM

dottycookie said…
Excellent! Why is there not sa shop like that near us?!
5:44 PM

Anonymous said…
That looks like the most marvelous place in the world. And quite possibly the meatiest.
3:31 PM

Jess said…
I have to say, whenever I go to a new store, or an odd store, I always have a teensy bb voice in my head commenting and saying what she would take pictures of. Like the good angel of shopping posts on your shoulder.
12:50 PM