We had an exciting afternoon here in Tuvalu yesterday.
The Tuvalu National Highway/Department of Public Works put barricades at each street, 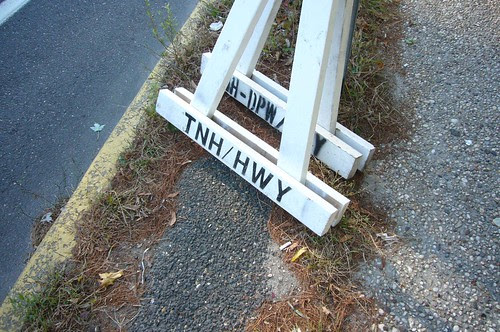 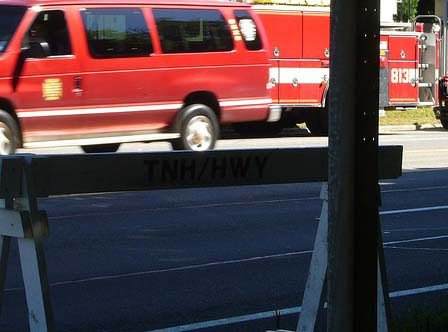 there were police officers everywhere and the fire departments of many neighboring villages assembled. With bag pipers.
It was the anniversary of the Tuvaluan Fire Fighters and there was a big celebration.
We didn't go across town to the party, but the parade passed right by our house.

To add to the excitement, our house was not only on the parade route, but our side yard was part of the staging area... 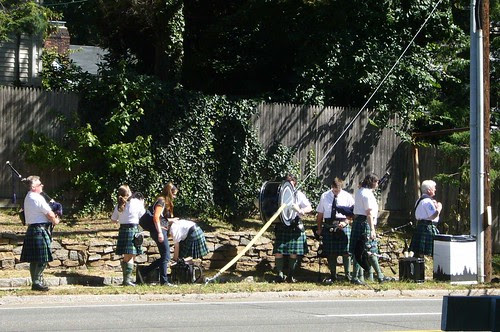 We had half a dozen trucks outside and these guys. Pipers! Warming up and standing with us in the shade before it was their turn to join the parade. We offered them chips but it seems that corn meal isn't good if you're going to play pipes for a few miles. 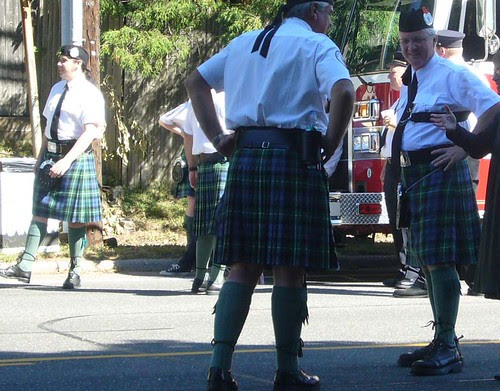 We had a wonderful time hanging around with them.
At one point I went to the middle of the street to ask them about those little knives in their socks.
When the enemy has overtaken you, you slip the knife outta your sock and slit your own throat, I was told.
Sheesh.
I didn't get to see what they carry in their little bags. 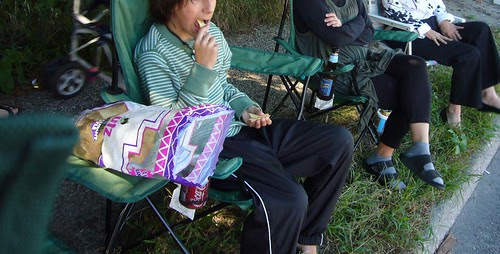 Sufficiently prepped, we waited for the parade.
(Youngest joined us and, as you can see, is in full chip-eating mode.) 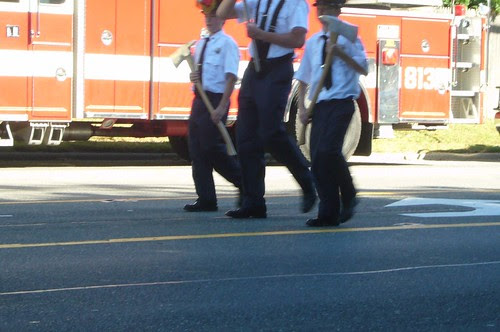 You've gotta love kids with axes. Unless they are in your living room. 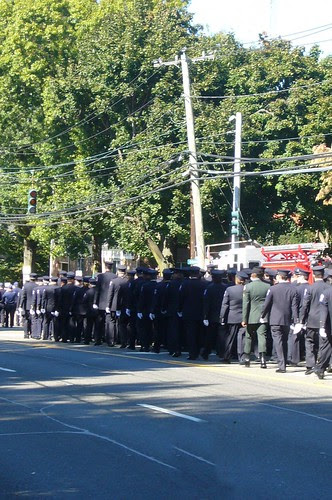 Hundreds of officers in a sea of blue. 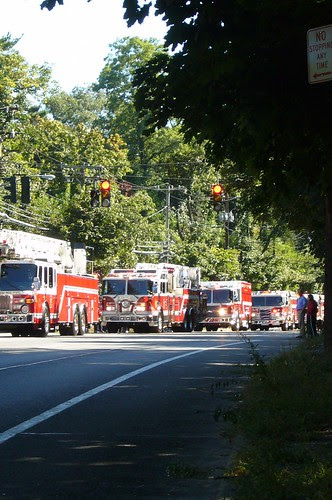 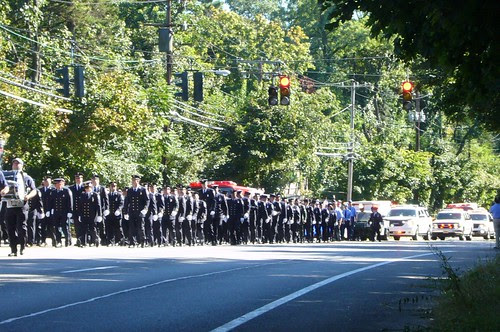 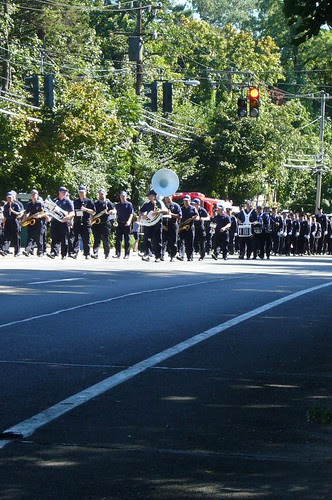 There was a police band. 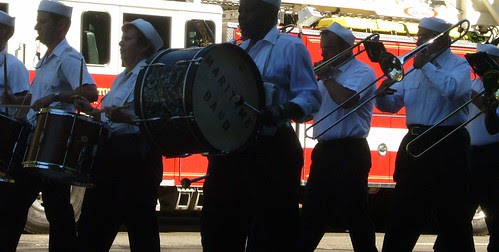 And a Maritime band - they wore nifty hats.

But the best bands were, of course, the pipers. 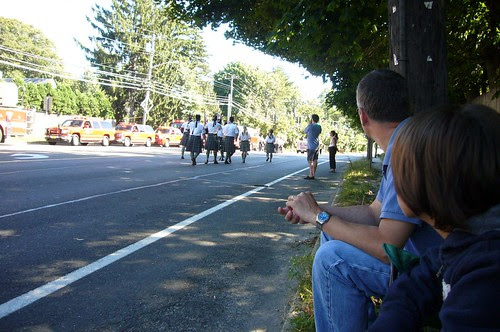 Our pals went off to march.

Others passed by while we cheered. 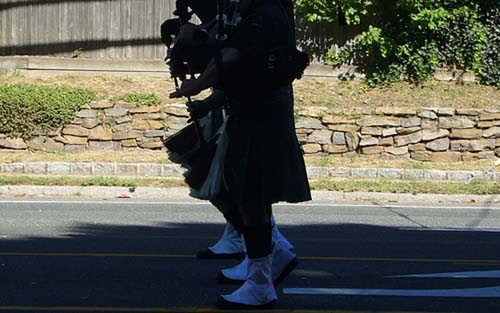 Great pipes were heard throughout the town. 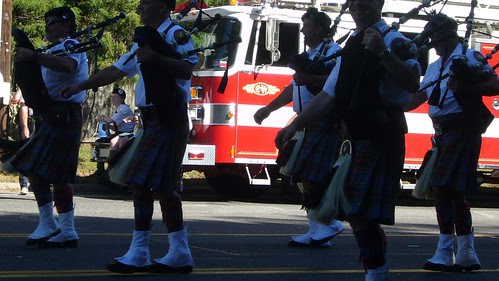 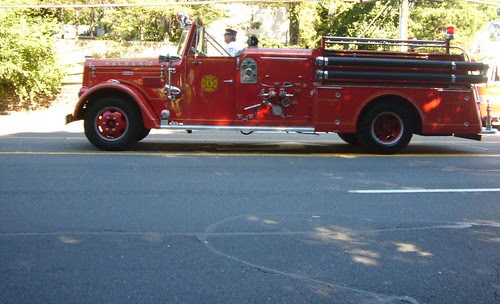 There was much to admire. 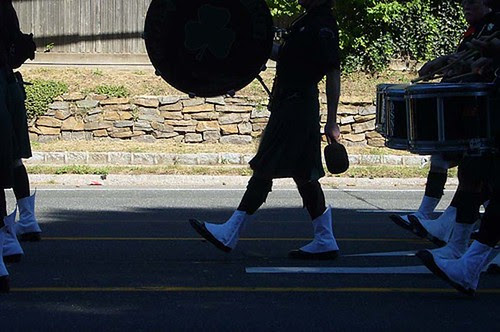 We love us some breathing air. 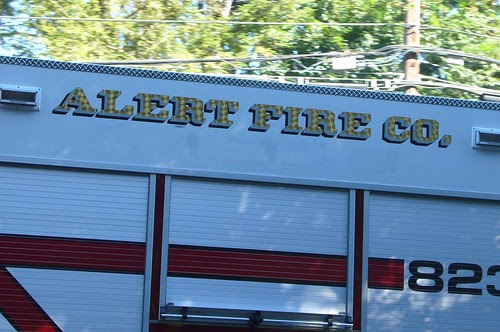 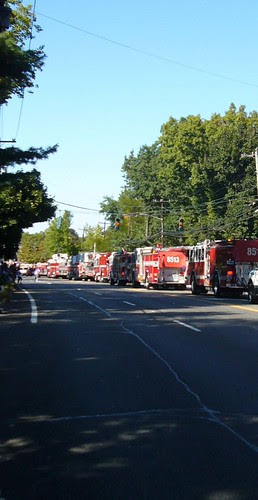 It doesn't matter what the company is called. They are all heroes to us.
Labels: they played Highland Cathedral at K's request

BabelBabe said…
ah yes, the skean dhu. CMU may have had a weenie mascot (a scottie dog!) and weenie "colors" (Tartan?!? what sort of school colors is 'tartan'?!?!?!), but we had our kiltwearing men with all the proper accoutrements. Yum.
11:19 AM

TheOneTrueSue said…
Virtual parades are even better than the real thing - no sitting and waiting ;> thanks for sharing.
11:40 AM

Stephanie said…
We were at a fire station open house this weekend! I have a lot of posts that I want to comment on and I'll start here:

Youngest looks wonderful and was that your new empire dress? v. cute. :)
12:03 PM

Anonymous said…
It's so nice to see you, even just a glimpse.

There used to be a piper who would practice every evening in the park behind our house. It was a nice way to wind up the day.

I think they keep their keys and cell phones in the sporrans. No pockets in a kilt, dontcha know.
12:39 PM

Unknown said…
We have one of those outfits. My great grandfather was in the Scottish American Club in Cleveland, Ohio. It fits my brother. Nice pictures. Glad your youngest is doing well.
2:32 PM

Sarah Louise said…
I kept scrolling down--what was the occasion? The equinox?

Caterina said…
"I didn't get to see what they carry in their little bags."

KPB said…
That is the kinda thing where I tear up instantly and people look at me with derision.

Oh how I adore thee.


(One day I shall share with you the crush on a boy who lived on my street and played in his school's bagpipe band/ensemble)
6:28 PM

islaygirl said…
i love firefighters so much that i put a big story about them this quarter in the magazine i edit. they're on the cover, too. LOVE me some firefighters.
8:38 PM

Unknown said…
What were the spray bottles (in the 4th photo with corn chips) for??

Mary said…
Bagpipes and the melodies played on them make me cry. Not sad crying though. Just tears.
5:12 AM

I think firemen are complete heroes - I'm glad they had a day to celebrtate themselves.
6:50 AM

MizMell said…
Nice parade. But I just don't see firemen the way most do. I have a bit of an "inside secret," you see. I was married to a firefighter for 18 years.
7:22 AM

They're filled with solid heavy things to protect the wearer's naughty bits. It's true, I saw it on the Travel Channel.

Notice where they are worn. If you get to protect one thing on you, if you're a man, that's what you protect.
6:27 PM