I don't expect anyone to understand this, or care

but I have to write it out.

When I arrived at Blogher, I realized that my laptop is registered in my name and, therefore, displays it in the top right corner of the screen.
I also saw that I had a folder on the desktop with my name on it (I don't remember why).
I remedied the first problem by taping one of my moo cards over the top right corner of the screen - as shown in this photo of me Twittering with Susie and Poppy in the widely disliked branding session: 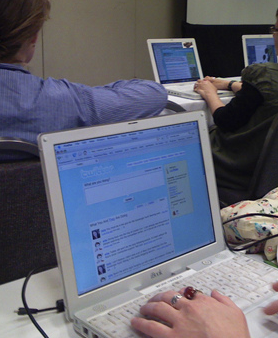 that's me on the right. Poppy and Susie are to my right. We were good about not talking during class but we Twittered constantly.
ANYWAY.

I shot dozens of photos in Chicago and was on my laptop all the time, downloading, uploading, and dragging the photos into a folder or the trash.
And, at some point, I dragged the hard drive folder away too.
All my passwords, all kinds of personal documents, lists, recipes...all gone.
For the past couple of weeks I have discovered more and more missing items.
I called K from Chicago to ask if he had software to recover deleted files.
I assumed that in one of my uploading/downloading sprees I dragged the hard drive into the trash and then emptied it. (I don't suppose that PC users know what I'm talking about.)
BUT
I've just discovered that I dragged both folders into my July photo folder.

SO.
Now I have everything that I thought was lost.
Labels: I'm probably too excited about this

Annagrace said…
Unfortunately I DO know what this feels like, not that it matters how or why...I'm so glad it was all recovered. Have a drink on me.
9:37 PM

kilowatthour said…
whew! you dodged a bullet there, my friend.
10:46 PM

Anonymous said…
You can do that on a PC too, but I swear I got the heebie jeebies and a sincere desire to freakin' BACK UP EVERYTHING on my external hard drive while reading this post.

Poppy Buxom said…
Yay! I think I know what this feels like. It's like losing your purse, and then having the police tell you it's been turned in.
11:47 PM

RW said…
oh. my. bloodpressure.
I am so glad you found everything.

Anonymous said…
I am an expert at losing stuff somewhere inside my pc, sometimes I don't even need to touch anything. So glad you found it all.
6:48 AM

MizMell said…
Glad your file was simply "misplaced." There's nothing worse than having to start from scratch on your Mac or pc!
8:00 AM

tut-tut said…
Thank the heavens above! It is easy to mistake your hard drive icon with the icon of a temporary attachment like your camera--at least it is here on my Mac, so I have to be extra careful.
8:48 AM

Anonymous said…
You should very well be excited.
As you can see, everybody fears what you are talking about.
10:20 AM

Susie Sunshine said…
HOORAY!! I was trying not to think about it, lest my brain waves make the situation worse. (I have the power to do that, you know.)
8:47 AM

KPB said…
Oh no. That excitement is WAY way WAY justified. It would have even made me dance a jig I believe.

(I'm on catch-up here as all the bigger boys are at footy training and the littlest fella has had a good scream, a feed and a dirty nappy and is now sleeping - so while I've been reading I've had no time for commenting. Ridiculous.)
3:37 AM