What a weekend!
As you may remember, K 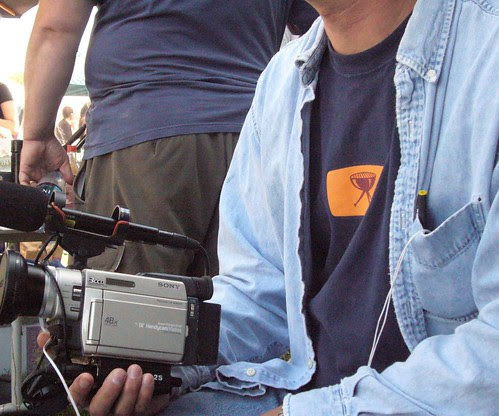 went to shoot his friend/co-worker, S, as he competed in a barbecue competition.
S is the big guy in the background. 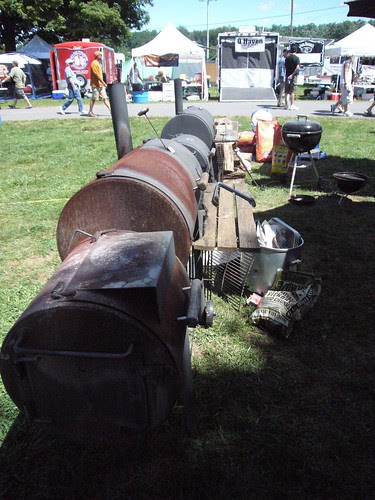 This was their camp for the weekend. Plenty of food, plenty of beer, plenty of laughs.
The team was dubbed "Stupid Fat Guys and Smokin Babes Suicide Barbecue."

And, as official videographer, K dressed for the team - 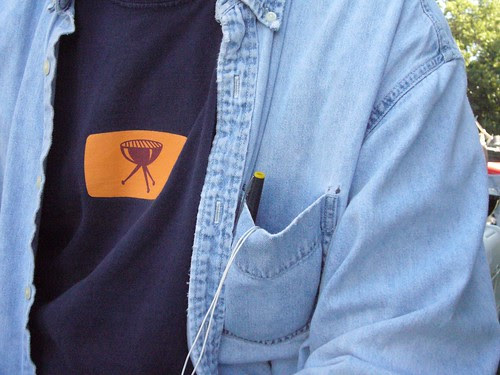 I decided to take the boys, and their grandmothers, up to the big meat-fest.

That's my mom. And S - team leader.
Yep, my mom is wearing some Dana Buchman jacket-thing to a meat-fest. 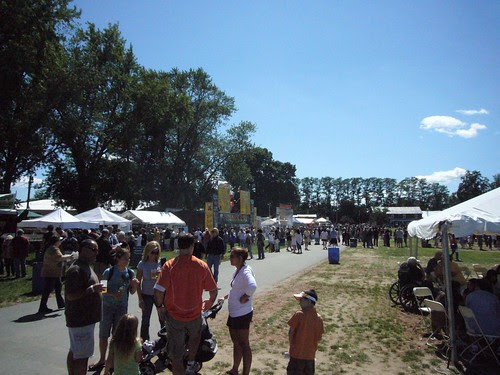 She was, without a doubt, the best dressed woman in attendance.

We arrived, admired the team trophies - 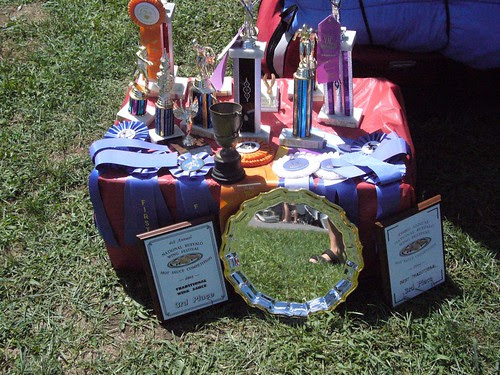 of which only three were awarded for actual cooking, and sampled some $45 steak. 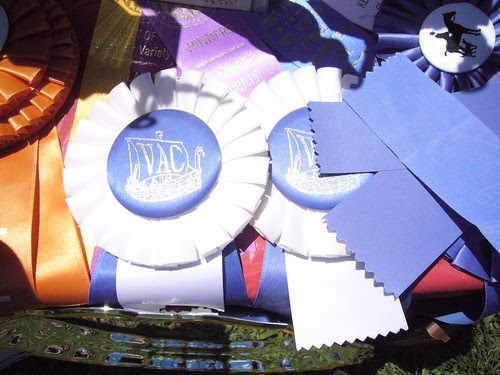 See?
Horsemanship and diving.
We donated a chess club trophy to the cause.

SOME teams had lots of trophies. 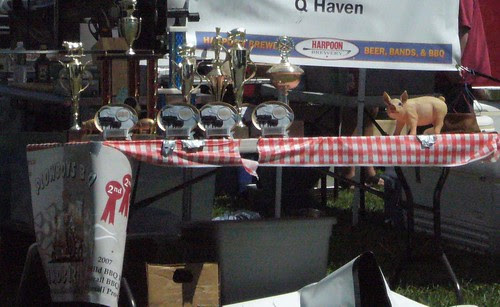 But neveryoumind. S put together a fabulous team of talented semi-professionals.

He even had an art director doing his garnishes.
The lettuce was gorgeous.
Did I get any photos of their food?
No.
I went off in search of this instead - 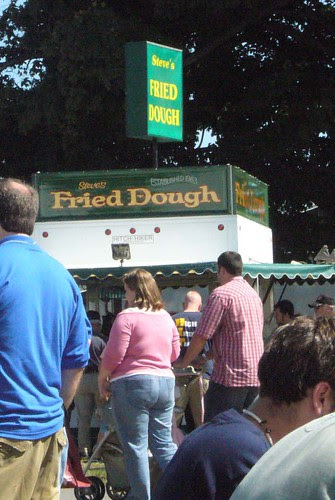 While K did more of this - 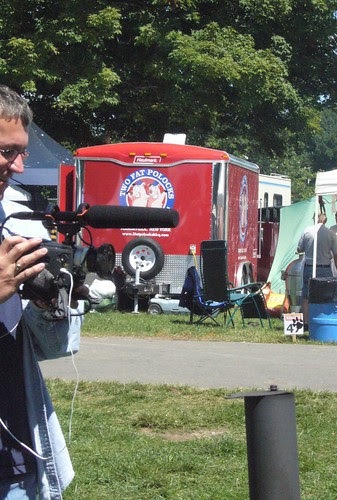 And the boys decided to compete in the giant inflated obstacle course. 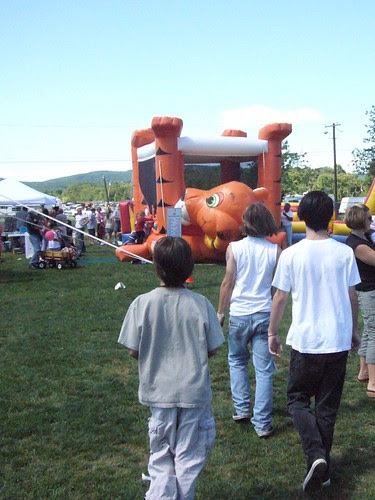 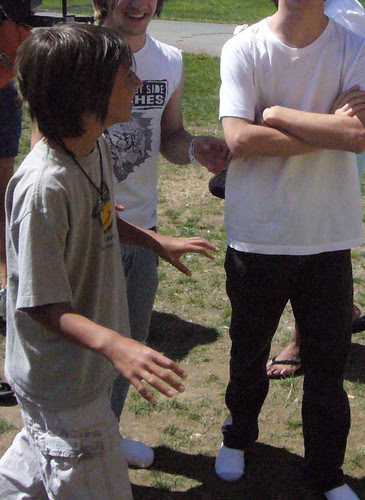 Rules were established.
But it looks to me as though there may have been some foul play. 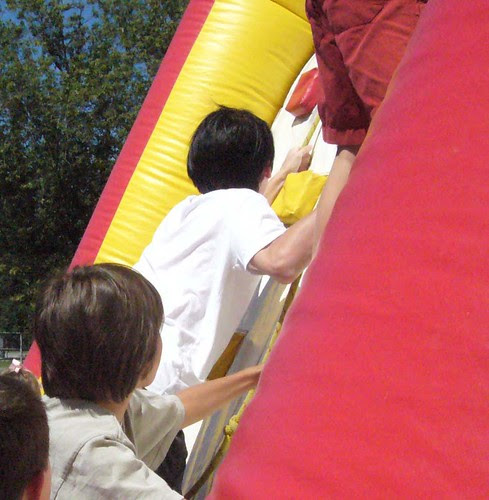 Fortunately, Youngest behaved for the climbing. 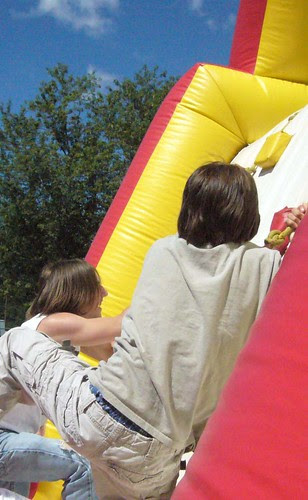 WAIT - is he KICKING his brother? 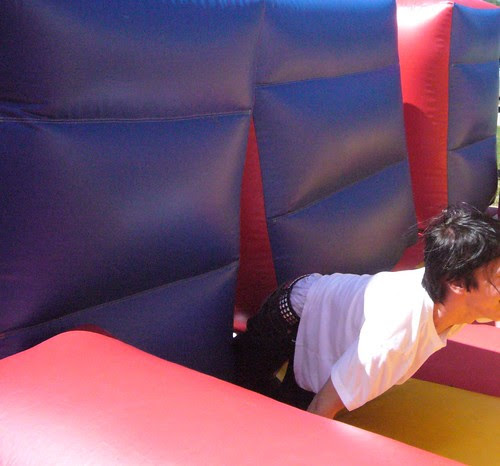 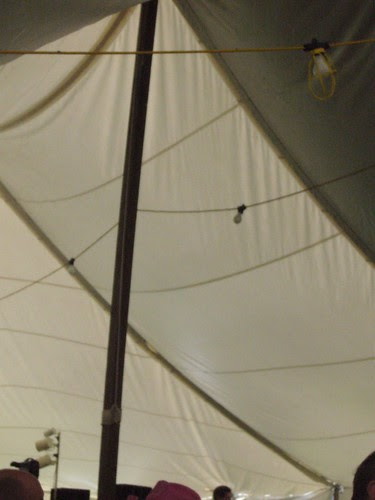 But it was time to head out to the main tent to hear who had won the day's prizes.
Each of the 58 teams submitted dishes for fish, lamb, sausage and steak.

The folks sitting next to me won both the fish AND the pork competition. 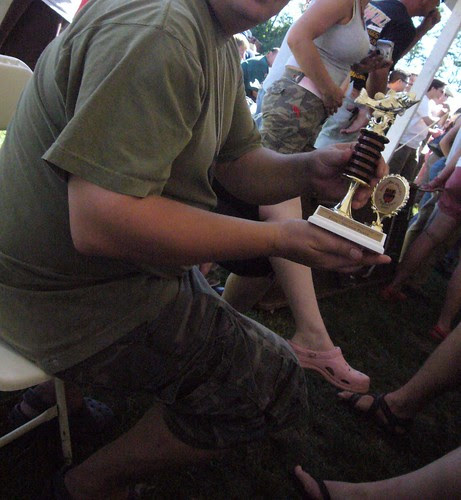 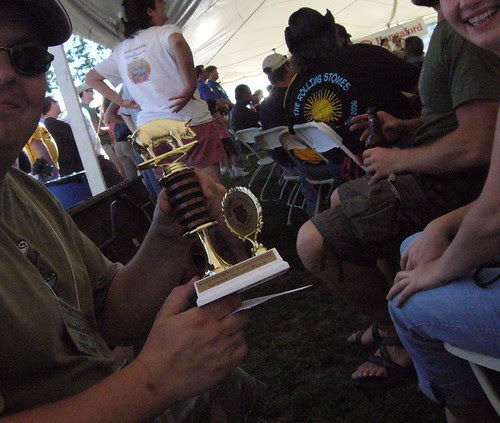 They were happy to show off their trophies and we had a blast cheering for them.

It was getting late.
We visited the ladies room with the nicest attendant in the land (Stall number seven is free for you, sugar.) and left K for the trip home - which took four hours instead of two.

It didn't matter,
we were full
and
happy.
Labels: the team took 6th for steak

Jennifer (Jen on the Edge) said…
What an uh-may-zing day. Lots of meaty foods and an inflatable obstacle course. Really, the unbeatable combination.
8:28 AM

tut-tut said…
Looks like a lovely time was had by all. I love all the pictures, and especially like that letterbox-effect one!
9:21 AM

Badger said…
Ooo! I would much rather have been doing that yesterday. I loves me a good meat festival.
10:20 AM

Anonymous said…
I know I'm old because the fried dough gives me a killer stomachache now. Doesn't stop me from eating it though.
10:40 AM

Amy A. said…
K has my all time favorite pen in his shirt pocket. Funny the things we notice.

Christy said…
What fun! I love that Youngest chose the wrong brother to slow down.
2:09 PM

Anonymous said…
Sounds like the perfect family day.
Your boys never cease to intrigue me, each one has something special. This time I noticed a new hip hair cut on Youngest (right?) and their ever wonderful sleek hands/fingers along with YOUR SMILE.
I remember that smile, even though I have no pictures of you (just to make it clear you don't give pictures!).
3:24 PM

Stephanie said…
Your boys are adorable together.

Anonymous said…
Did you try the Q Haven...Yummy yummy BBQ. Of course the boys competed. I have 2 and was behind them once at Mass as they pushed each other all the way up to communion. The priest was holding a rather large piece of host and they were actually jostling to see who would get there first!
10:04 PM

And I thought that van said 'Two Fat Bollocks' for a minute. Scary stuff.
7:10 AM