I have a cold. It comes with a deep, muscle-clenching cough - but only sometimes, and a running nose.

I cannot find my hat. 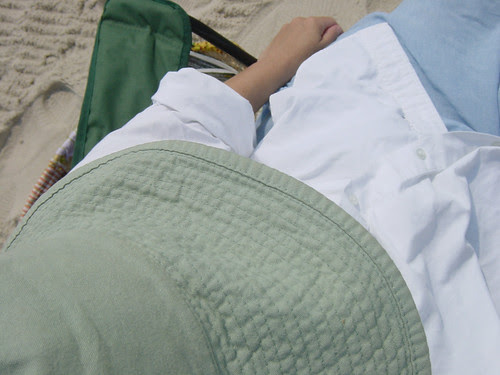 This hat. My BEACH hat.
I just know I'm going to need it in Italy and I haven't seen it since the end of July.
I may have left it on a bench at the surfing beach - but that's not like me.

It's making me crazy.
I've looked EVERYWHERE.
It's from when Martha Stewart had a catalogue.
No other hat will do.
CRAZY I TELL YOU.

Yesterday we took at trip to Target for things to bring to Italy.
Everyone had good suggestions.

Not this, though.
We didn't buy any of these.

a case of Red Bull.
I didn't think so.

He lobbied for designer water.
I mentioned Pellegrino.

I realized that this cupcake-man looked kind of evil.

We found plenty of good stuff.
Do you think they have Skittles in Positano?

Some of us wanted 99 cent buildings, but others weren't sure what we would do with them.

I spied this on the way home.
A shot for Poppy.

We debated for several miles.
A 'bored CPA' or a
'board CPA' or
BRAD who IS a CPA
or a CPA who works at a bread company -
perhaps someone bred to be a CPA, or a CPA for birds.
Sadly, it would appear from the woman driving, that it is Broad CPA. Big hair, big nails, big make-up. I'm hoping it's Brad's wife.

Look.
The whole thing exhausted me.

When I awoke, rested and refreshed, we went to see the ruins from the fire the night before. 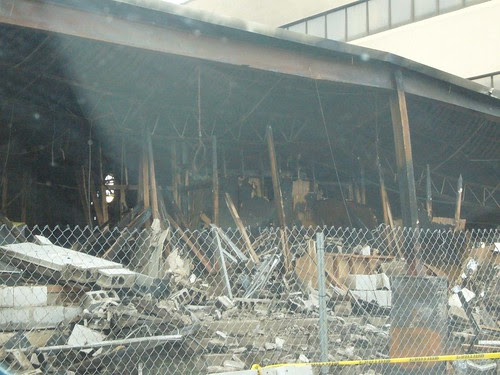 It was a huge fire. Many neighboring fire companies came to assist the Tuvaluan force and it took 16 hours to put out.
Knowing everyone in the industrial building was safe made it spectacular to watch.
The smoke was very thick throughout the town. 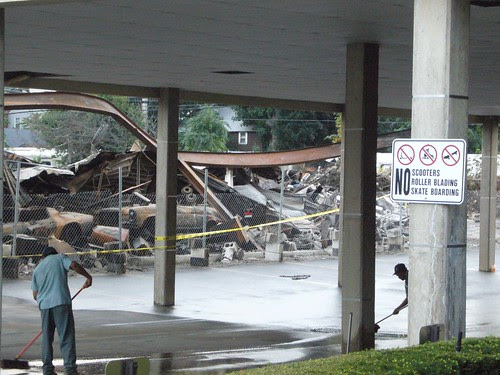 It was still smoldering when we saw it. And smelly. 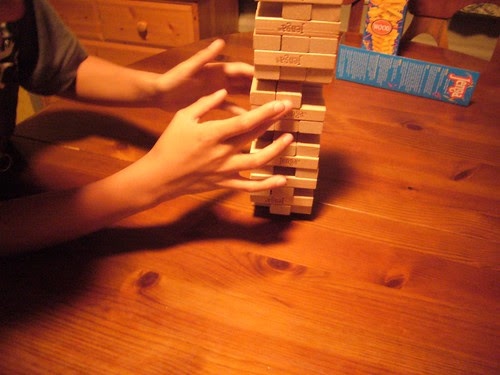 A game of skill and steady hands!
I lost!
Labels: not much skill and shakey hands

Buy something wonderfully Itailian when you get to ITALY!.
8:41 AM

And my girl child has about 47,000 of those Littlest Pet Shop toys.

Stephanie said…
A favorite hat is a very sad thing to lose. Don't give up hope...

I love that picture of you on the boat.

And, we had those .99 cent buildings. They were played with the first day or so, now neglected and awaiting goodwill transport.
9:11 AM

robiewankenobie said…
my four and six-year-olds are wicked good at jenga. me? notsomuch. i like to play with the leon and make naughty comments to distract him. it is a good strategy and often works in my favor.

good hats are hard to find. my condolences.
9:12 AM

Anonymous said…
Your hat.
I completely understand your angst about losing it--or better, about it being temporarily gone.

That is a fabulous hat. I had one so much like it--I bought it at Banana Republic when it sold all that fun safari stuff, perfect white shirts, and these hats, like yours, in 2 wonderful colors. Mine was a little darker than yours and it was such a great hat I thought of it as my friend--until it went missing on me.

I learned later that Daughter lost it out on the lake and didn't want to tell me. I'm not sure if I've forgiven her yet--and this was 15 years ago. But that's the kind of hat it was.

Did you check in every crevass, every nook, every possible place in the car, doesn't matter if you swear it won't be in there check anyway. Thoroughly.
Check in the garage. In and around everything you've got stored in there.
Tell All Three Sons that you do not want to invade their privacy but if one of them doesn't find your hat, you will have to search their rooms.
Finally, where did you last wear it, and who were you with, and who among them are the most likely to steal it (inadvertently of course).

Good luck.
I'm cheering for you.

Anonymous said…
My ten year old asked for some Red Bull the other day. Um. No.
9:56 AM

Jennifer (Jen on the Edge) said…
The gardening catalogs often have hats such as those.

I'm with Paola, however, get something utterly FABULOUS in Italy.

Heather said…
I bet yes re the skittles.

Anonymous said…
As a female CPA I can say with authority that the big hair, big makeup, big nails gal was NOT a CPA. Definitely Brad's wife.

I also second the buy-a-fabulous-hat-in-Italy idea. Although you may have to be open to new ideas; your favorite hat is/was American styled. (You will have a LOT of shopping to do in Italy :) )
11:22 AM

Anonymous said…
Sorry, I'm very late.
Spend the WHOLE DAY BY BOAT with a german and an australian friend (married with italian boys). We had the best of times, and I was thinking we can have one with you very soon.
You have a huge selection of hats here, cotton, straw, whatever, maybe you'll find one that you like.
I believe there are skittles here but I am not a big candy fan myself so I am not a 100% sure.
Red Bull? Dunno. He doesn't even drink sparkly water!!! Just still water and occasionally a fruit juice. And talk about fire...it's pretty bad aroudn here, not as Greece but pretty BAD.
2:21 PM

Anonymous said…
Peanut butter might be an interesting thing to bring to Italy.
2:51 PM

dottycookie said…
I can see why you are sad about the hat - it is a lovely one. I hope you find it in time for your trip!
5:39 PM

Anonymous said…
I think that a CPA for birds is the most logical guess.
10:10 PM

Saoirse said…
LOVE the boat picture (it's transportive--unfortunately, not LITERALLY so, but, still....)

Anonymous said…
I met a guy from Sardinia this summer. He's doing a semester here at Coloardo College. He was totally fascinated by...FRISBEES! You would think that you could find them anywhere but this guy had NEVER seen one before. They're cheap, you can probably even find free ones (promos) if you look around, take a few with you.
He also said American ice cream was like nothing he'd ever had but I don't think you could carry that with you!
Which one of the boys is going to fill in for you while your away? You never know, it might be fun! I think they should all try writing posts for a day or two.
Scot
2:59 AM

MizMell said…
Sorry you have a cold. Have you tried Airborne? You can get it in powder form to mix with water. It will actually strengthen your immune system, I hear. And you probably can get it at Target... works for me.
6:35 AM

Alice said…
Do they have Jenga in Italy?

Unknown said…
I love Target. Its my favorite store.

I wish I had a friend in Italy. My most exotic friend lives in Michigan. (sigh)