laughing all the way

It's many hours - no matter how you choose to look at it - a lot of traveling time.
The car was packed to the gills, one false move and Youngest was clocked in the head by a guitar and K's bicycle was attached to the Volvo with clamps and prayers.

We ate the worst fast food, delivered amazingly slowly, and braced ourselves for the last leg of the trip. But not before we stopped for "fireworks."
In an defunct gas station, with neat rows and shelves of buy-one-get-one-free packages we listened while the salesman described all the incendiary devices.
We were only able to halt the pitch by telling him we wanted sparklers, for a seven year old.

With K's sister about half an hour behind us, we arrived and unloaded.
I don't even remember what we laughed so hard about, maybe we were just giddy from being in the car...
pictures and some words: Middle and bb. Members of the Witness Relocation Program. Or Amish. On the beach. 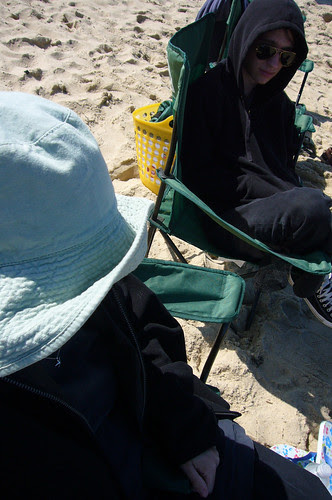 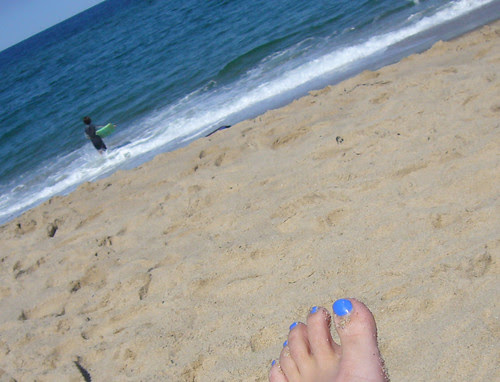 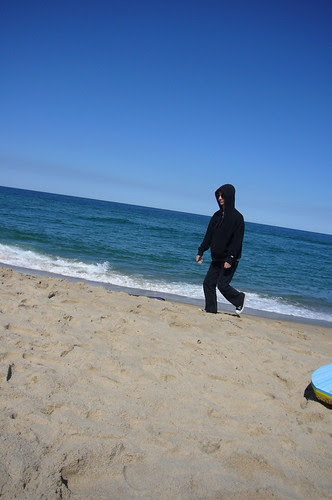 One little cousin with ice cream - 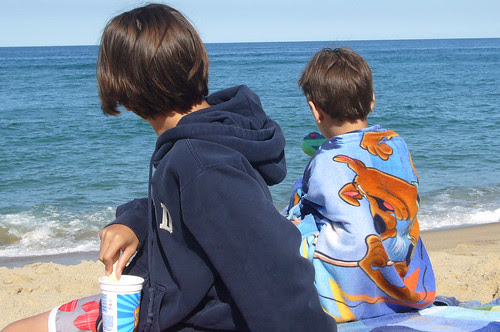 Okay. We don't know what's going on here.
Some guy with a book. 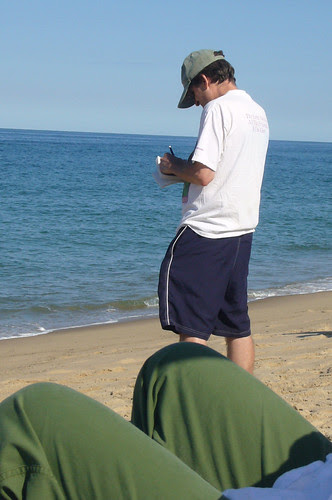 It's just like being in Mexico - without the guys with machine guns. 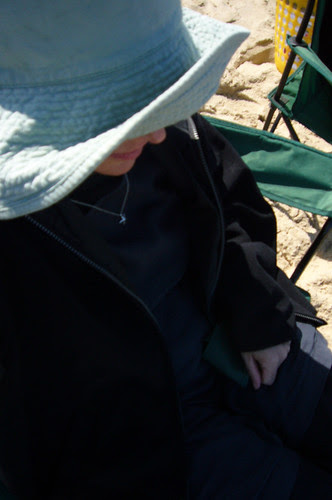 Anonymous said…
"Witness Protection Program"? "Amish"? You crack me up!
9:15 AM

BabelBabe said…
i wish i were young enough that you could adopt me (I am a fabulous sister, your boys would adore me as a sister) and then I could go on all these awesomely cool vacations with you. I don't eat much. I do my own laundry....and i generally ante up nice Christmas gifts....
9:15 AM

jenny said…
My husband was fishing in that bay yesterday and he almost CAUGHT a seal - it was chasing the bait around and then popped it's head up and looked at the boat and swam away.

Beach days in sweatshirts? I love them - my son is having one today. Enjoy.
10:14 AM

Suse said…
Looks relaxing. Try and unclench those fists and have a wonderful break!
10:51 AM

MsCellania said…
I like your blue toes and hat.
And am so so envious that you are enjoying the great outdoors in a sweatshirt - HEAVEN.
While we are ROASTING the last few days. a/c runs non stop. Which I hate.
10:58 AM

tut-tut said…
Yes, heard it was very cool on the Cape today. Still, all that blue.
8:33 PM

alice c said…
So...you took my advice and went for the burka option! Saves on the sun screen and draws attention to your best features e.g. toe nails. I know the Sartorialist will approve.
4:56 AM

TheOneTrueSue said…
Fabulous toes. I wish I lived near the beach!
11:11 AM

Crazed Nitwit said…
Your pictures are incredible and make miss my oceans in NJ and California and my lakes back in MI. I'm a water gorl and it's hard to live near SEattle where the water temp is 38!

Looks like my idea of a fabulous family vacation!
8:18 PM