Having sufficiently ignored the children, save for medical attention and meals, for the past few weeks, K and I offered them a day out.
We asked if they'd like to go bowling, they were not interested in bowling.
We offered a trip to the bay, no one wanted to go to the bay.
An art project was suggested, an art project was rejected.
A museum outing was offered, a museum outing was excitedly accepted.

After fortifying ourselves with blueberry pancakes and researching to determine that purchasing a family membership to the museum for a year was pennies more than our admission fees for one day, we set off.

Middle was anxious to see the bones.
Did you know that 80% of each set of bones must be real fossilized bones for them to be on display?
We learned about that from a fossil expert, a tiny lovely older lady who told us lots of interesting things and then left us to hide from a patron who was arguing with her about whether this particular dinosaur was a juvenile or not.
I wish I could have gotten a photo of the fossil expert - she was gorgeous in a palaeontologist kind of way.

How much money do you suppose one must donate for a cart?

A dinosaur resembling my father.

A complicated photo of one of Middle's favorites, the Smilodon.
Dumb name.

Meanwhile, I am fond of Pterri.

This, apparently, is important.

WE LOVE THE PALEOZOIC ERA.

A dinosaur and my husband.

There were a few good outfits in this area of the museum:

Belted tunic and leggings - this woman was translating everything into Mandarin.
Which made her even prettier.

We saw an exhibit on gold.

Here I am in gold leaf.
I'm sure I didn't know enough about gold.
There isn't any gold left on the earth - but there was lots of it here.

Isn't this pretty?
I liked it very much.

Gold is mined in terrible ways. With terrible chemicals. I learned about it during a pretty terrible short film in a dark little room. And the man sitting next to me farted. (And he was not related to me.)

Middle demonstrates that, he too, has a vast collection of invisible gold.

Middle is too skinny to be worth one million dollars in gold.
I had no problem.

Much of the museum is dated. There is still plenty to see, but occasionally one finds them self in a room that has been untouched for generations -

This diorama of the water cycle was in a rec room setting from the 40's or 50's.
Now that we are members we may have to start a movement for renovation.

Middle was busy laughing at the font.
Such educated children.

Obviously this slice of the biggest tree in the world is not something the museum would dispose of, but it's dusty and in a dark hallway.

These fish and diver were dusty too.
Someone needs to dust at the museum.

The big whale. He has been dusted.
There is a dance floor beneath him and I happen to know the rental fee for the room is $50,000. I pass this information along in case you'd like to consider the space for your bar mitzvah.

The poor sea elephant.
She is not attractive.

What can I say?

I suppose there IS no other way to lay his head.

We did not pay an additional fee to see the mythical beasts. Because we are MEMBERS.
I suggest you skip it entirely as this: 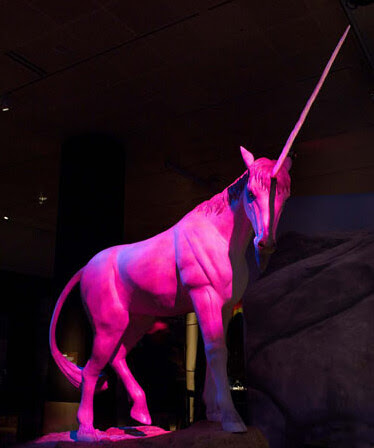 is the highlight of the show.
It is plaster.

This, also relegated to a hallway,

is a new mineral thing. I don't know, they dug it up in China.
It's pretty.

This is Middle showing us what this scene is missing.
A tranquil yet boring ocean scene which could be livened up considerably with the addition of a shark - THIS BIG.

We have decided that giraffes are stupid.
God's joke creatures.

But the monks admiring them were very cool.

It's always fun to pose with primates.

Middle: It's such a gyp that the gorilla is called gorilla gorilla. Couldn't they come up with something Latin?

At some point we had to cross through the Hall Of Totems.
As we could not be bothered to actually READ the names of the totems, we made up our own.

The No, Really, I'm Fine totem.

I Need To Pee.

I leave you with two last things.

The scariest thing in the museum.

Geggie said…
The totem commentary cracked me up!
12:30 PM

Joke said…
Me too! Break a leg!

I'm not clear on what that "scariest thing" is ??? looks like an old rusty sink?

Jennifer (Jen on the Edge) said…
Glad to know I'm not the only person going through museums and thinking less-than-intellectual thoughts. :-)
1:54 PM

Anonymous said…
Thanks for the tour!
We don't have museums liek that anywhere near us...so it was appreciated.
And funny.
2:04 PM

Jan said…
The whole time I'm reading, I'm thinking, "Shouldn't she be packing?" Ha. Then I caught your label.
Sounds like a fun(ny) day with your crew.
5:40 PM

Unknown said…
The totem names cracked me up, as well.

I always loved that museum back in the Paleolithic Era when I was a young-un. Haven't been there in ages. Thanks for the photo tour!

Anonymous said…
I like the old dioramas and dusty hallway exhibits. Reminds me of the old days when museums were fussy and curious and dusty and not all techno glitz.

However, the totems - I spewed coffee all over the keyboard - and I was at work!

alice c said…
Remember when you fly that if the dinosaurs could do it with a few random bones, scaly skin and a brain the size of a peanut you will be just fine surrounded by the might of modern technology.

savvycityfarmer said…
kinda diggin your "meet me" list
7:48 AM

Anonymous said…
awesome! thanks for that. it brought back one of the best things about my childhood in the big city.
9:01 AM

Julie said…
I have actually been to a wedding and a few fundraisers underneath that blue whale.

While the parties were wonderful I was always nervous it was going to fall on me.
11:29 AM

KPB said…
"Having sufficiently ignored the children, save for medical attention and meals"
you mean we're meant to do things with them in between these times?
7:27 PM

KPB said…
And one of those totems perfectly captures my recent predicament.
7:28 PM

Maya said…
Just stumbled upon your blog through sk*rt and got sucked into this! I so need to do this on our next museum visit! Love how you documented the very strange, the people, etc. Thanks for helping break up my work day!
3:18 PM