Even though it's mostly about watching television.
We've made the house a cool dark cave as outside it's a hot, bright inferno.
So I've been watching more television than I usually do...

gives me the heebie jeebies. And yet - if I happen to click by it, I CANNOT CLICK AWAY.
It's riveting, like a car crash. Fortunately K merely has to glance my way and I am too embarrassed to leave it on.

Sometimes I can tolerate this -

but not always. I do respect Stacy and Clinton, even though they are a poor excuse for their English counterparts, but get a grip people. Sweatpants and your husband's tee shirts do not a wardrobe make.
I do like Nick, the hair stylist -

and I LOVE when he says things like: frankly your hair looks cheap and trashy, in his clipped little accent. Sadly, we all know that few people can reproduce the looks he puts together after they get home.

usually has her work cut out for her. Either the person they are making over NEVER wears makeup or she likes to walk around looking like Amy Winehouse. Time and time again I have watched Carmindy do a 'smoky eye.' For some it's a major commitment and for some it means dialing back the makeup many notches.

I've caught a few episodes of Little People, Big World.
At first I felt kind of voyeuristic, but I got used to it.
It's just a reality show.
About a family of dwarves...

They have three average sized children too.
I like them, the family.
They don't push the issue of how tough it is to live in a tall world too much and they are a nice family.
I like the way they parent their kids - and their lives are not without troublesome times.

I've seen a couple of these too -

and, I must tell you, K's sister thought up this show YEARS ago. Of course no one ever did anything with her great idea and SOMEONE must have heard her mention it and STOLE IT.
Anyway...
Who wouldn't be fascinated by this kind of stuff?

I would KILL to go to an aluminum foil factory and see how they make it.

Helicopters AND beer.
Actually, I've seen how they make beer IRL and it's a smelly process - ALL THE MORE REASON TO SEE IT ON TELEVISION.

I just missed Annie Hall the other night.
I could use an afternoon watching Love And Death.

I based my entire 8th grade wardrobe on this film and my brother B and I can quote entire scenes. Lots of the script has worked its way into our daily language.
Any large box we spot is "those earrings you wanted."

But enough with the television.

How cool is this?

One writes a wish on this lantern, inflates and lights it...

and sends it to heaven.
Silent fireworks. 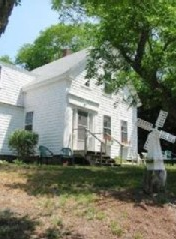 Paula said…
The lanterns are lovely.

Anonymous said…
Those lanterns are breathtaking.

I worked in a contact lens factory for about six months once. "Factory" sounds way bigger than what it was, one floor of a 1940s-vintage building on the edge of downtown Minnepolis. It was interesting, sort of, although I was bored about 90% of the time. Factory work being no so much on the fascinating side after the first ten minutes.
12:14 PM

robiewankenobie said…
mr. rogers used to do great behind the scenes movies on picture picture. *sigh* i miss mr. r.