every adventure begins with a map...

...or a new wetsuit.
A trip to Dick's was required.
With a side trip to the Apple store.
Why don't I ever make the boys go shoe shopping with me?

Behold the mighty goat/ram thing who oversees all business within this store.
This venerable beast has been cut in half and mounted here to remind us, er, I don't know why it's here, but it's near the guns, so maybe someone shot it.

Middle liked these paintball guns.
Middle can't play paintball though, he's too skinny and even though they say paintballs don't hurt, they would hurt HIM.
He liked this too -

"Because the Marines use it." "Do you want to be a Marine?" I asked naively.
I got the what-are-you-nuts? look in reply.

On to other pursuits.

"I know how to crack this safe, mom."

"You hit this part with a sledgehammer."
Yeah, I'm sure no one has ever thought of that.

Meanwhile, there was a slight commotion in another aisle.
Weapons were chosen... 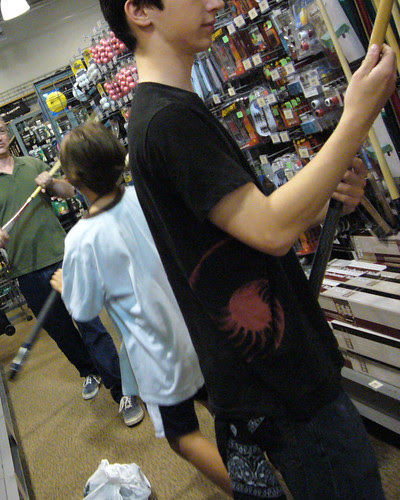 the boys have been watching a lot of that BBC Robin Hood series. 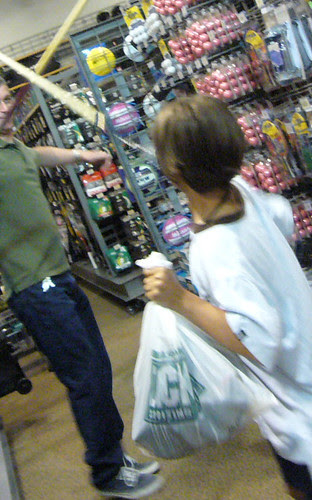 So many tempting shots.

Middle wants one of these punching dummy things. I can picture it in his room with a hat and a tee shirt. And sunglasses.

Tattoos were debated. As was the public rock wall -

Alas, Youngest wasn't wearing socks and so could not use the public rock climbing shoes, which was FINE with me.

At the register, with our wetsuit, we encountered two little boys. The cashier had just given them the bad news: they were $2.56 short. We looked around us...the cashier volunteered the fifty six cents and K coughed up the two dollars. They blushed and smiled and I told them not to tell their mom that they took money from strangers - tell her you got a discount. AND BE GOOD.

Feeling humbled by this small act, we made our way to the Apple store.

Where we learned that dead Shuffles are small paperweights.
Don't you think they should serve latte at the Genius Bar?

Back at the car we realized that the four coach buses in the parking lot were taking campers to sleep away camp...

"Quick! I think you can still make the bus!" I said as the boys put their headphones on.

I got that look again.
Labels: I could never part with them

If rock walls were meant to be climbed by humans, they'd have built-in steps, don't you think?

Like if people were meant to fly, we'd have wings...

islaygirl said…
i love the two-little-boys part. but what were they buying?
10:39 AM

blackbird said…
The little boys were buying boogie boards!
I forgot to put that in...sheesh.
10:41 AM

Anonymous said…
Who but you would ever do such a touching thing. In Tuvalu!?!
You rock.
12:36 PM

My 12 year old showed an interest in playing. Then DH played a few times with the guys from work. Came home spotted like a leopard every time.

After my son saw those bruises, he never asked to go paintballing again. =)

Unknown said…
wow, your Dicks is so different than our Dicks. We don't have paintball guns, and we definitely don't have half rams. We've got two Dicks nearby, but no rockwalls in either of them. I think we're getting gypped.

I'm another one that would have given the boys the money. Some old lady stopped me in CVS begging for a stamp and I had to apologize at least 12 times because I keep my stamps on my desk at home. I mean, I felt GUILTY. I'm such a Jew.
5:39 PM

TheOneTrueSue said…
You know, it feels silly to just leave a comment saying, "Love this," but - I love this post...
4:29 PM

I once had a woman give me a dollar at Home Depot, when I was short 86 cents. And she let me keep the change! I was buying flowers. They bloomed quite nicely. She helped make the world a better place.
11:31 AM